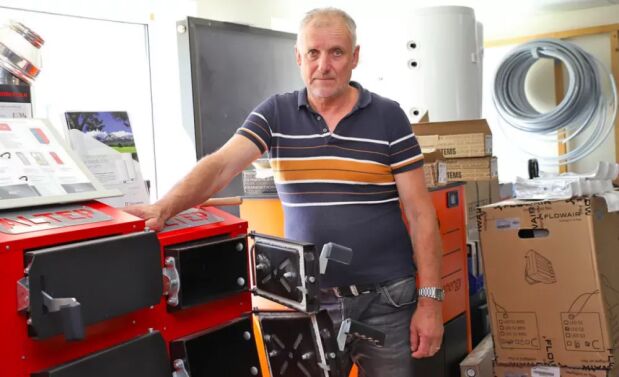 Although the summer heat is still pampering, the shorter days remind us that the heating season is approaching. The worst part is that it lasts for an average of seven months and it shakes the wallets badly. Almost every heating season, the prices of both fuel and heating equipment gradually increased. But now we are not talking about price increases, but about them jumping in seven-mile increments. The reasons are known to everyone – from February 24. Russia’s continued brutal military aggression against Ukraine disrupted economic relations and hit the energy industry the hardest.

The boom in air conditioners and solar power plants

On Tuesday afternoon in Pasvaly, Petro Avižonis St., when we visited the salon of “Vilpros”, which sells heating equipment, we asked its owner Sigita Rauckis about this year’s trends and prices. Comparing with last year’s purchases, the interlocutor mentioned a significant increase in the demand for air conditioners and solar power plants. S. Rauckis said that Vilpros specialists install the mentioned and other heating equipment in customers’ homes. Speaking about the increasingly popular solar panels, the entrepreneur pointed out that some customers who want to purchase them face a serious problem – it is not so easy to match the power of the solar power plant specified in the ESO conditions.

Among the solid fuel boilers, the most popular are pellet boilers with the fifth class energy efficiency coefficient. Because when purchasing them, you can expect state support. The owner showed a boiler of this type in the “Vilpros” store, costing over 2,500 EUR, brought from Bosnia and Herzegovina. More customers are interested in air-to-water heat pumps, which are also subsidized by the state.

See also  Often used as a motorcycle for hoarding fuel at gas stations, the price of a used Suzuki Thunder 125 is shocking

Due to the sharp increase in gas prices, only one boiler using this fuel is being sold this year. Observing current energy trends, it is unlikely that the gas boiler buying boom will return soon. Fireplaces are not popular either.

The prices of all solid fuel boilers have already exceeded the amount of one thousand euros. Formerly one of the cheapest so-called “grandmother’s boilers” with “rings”, which cost 500-600 EUR, are now sold for almost half the price. For a Ukrainian 10-12 kW solid fuel, you would have to pay over 1,300 EUR. A year ago, such a boiler cost about 800 EUR.

At the end of the conversation, S. Rauckis noticed that many customers, unfortunately, tend to ignore the folk proverb that sleds should be prepared for winter in summer. When the weather cools down, they flood the salon selling heating equipment and are nervous that they can’t get the boiler they want right away, and invite a handyman to their home.

Mindaugas Mickus, the manager of the Pasvalis fuel base located on Mūša street, cannot say anything comforting to his customers – compared to last year, the prices of wood sawdust briquettes, coal and peat have increased significantly. The interviewer advised to write the word “about” when specifying the prices, as they change quite rapidly. Of course, it is not useful for customers.

Newspapers are full of ads for cheap firewood. Only the word “cheap” should be put in quotation marks. After calling one of the phone numbers indicated in the ad, the man explained that machine-chopped mixed firewood (10 cubic meters) costs EUR 580, and the same amount of birch bark costs EUR 650.