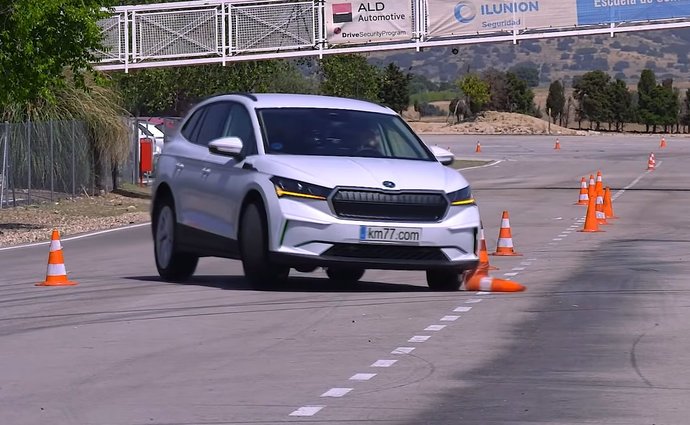 The Mladá Boleslav electric SUV Škoda Enyaq iV, the first built on the company’s MEB electric platform, recently arrived for testing by the Spanish organization km77.com, which verifies the car’s stability during the elk test and slalom.

At the beginning of the summer, the electric Volkswagen ID.4, ie the Škoda sibling’s Enyaq iV, which passed the moose test without knocking down the skittle at a top speed of 73 km / h, also passed these tests. The car was supposed to look stable and predictable, but the testers complained about the stabilization system, which did not always behave completely adequately.

The test drivers also encountered similar behavior at the Škoda Enyaq iV, at least on the first drive. In subsequent rides, however, the car’s characteristics reportedly began to deteriorate and the car managed to pass the moose test safely only at a speed of 67 km / h – for electric cars quite low speed.

During several more rides at higher speeds, the car did not look so confident and predictable. After the first evasive maneuver, ESP hit and helped stabilize the car, but shortly before the end of the test, Enyaq suddenly got into a relatively significant oversteer skid.

The previously tested Volkswagen ID.4 did not show similar behavior, but it should be added that they were not identical cars. The Enyaq iV was tested in the iV 60 version, ie with a battery with a capacity of 62 kWh and an output of 132 kW.

VW ID.4 was tested in the Pro Performance version with a power of 150 kW with a battery with a capacity of 77 kWh. Thus, there is a weight difference between the two cars, which can affect the handling. Nevertheless, the weight difference should not be so large as to cause such differences in vehicle behavior.