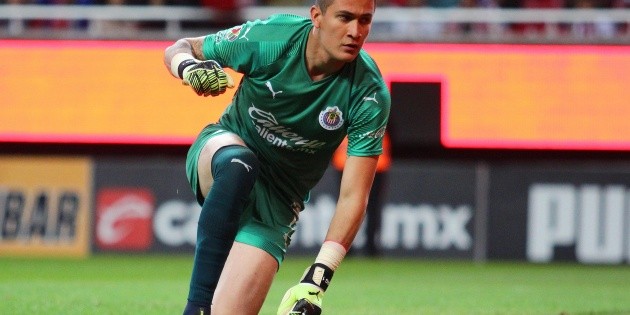 The board of the Chivas de Guadalajara is already studying the movements it will make in the next transfer market of Liga MX and the specialized column of Mexican soccer: The Sniper, revealed in its edition of this Tuesday in the Récord newspaper that the substitute goalkeeper Raúl Gudiño will be placed in the “showcase” in order to obtain resources for his transfer or a satisfactory exchange for Opening 2020.

The Sacred Flock that had chained its fourth game without losing in this semester when equaling 1-1 with Monterrey, on March 15 and had remained for the third consecutive date in the Liguilla area, occupying fifth place in the general classification of the Liga MX with 16 points, product of four wins, four draws and two defeats. All before the suspension of the championship due to the coronavirus pandemic.

The column of “The Sniper” reported that “On Sunday I heard from my teacher David Medrano in Personal Marking that not even the most powerful Chivalctics are saved from the economic blow that the contingency of the new coronavirus means, because he revealed that Amaury Vergara already asked his friend Santiago Tinajero de Necaxa, an extension to be able to pay him the debt he has for the recent signings of Cristian Calderón, Alexis Peña and Jesús Angulo. Just as they read it“And added that”If the lack of income forced the boss of the Flock to ask for a more comfortable term to pay off the famous arrival of signings in the Peláez Era in ‘small fertilizers’, I wondered what will happen now with the reinforcements they were planning for the next tournament“

The publication argued that “I found a simple and logical answer. Initially, the sports design of the next tournament does not stop and There are already some movements in mind, one of the main ones is to look for the exit of a player who could have been a figure, but he has already lost ownership and still has a poster to seek to place him with some good performance: Raúl Gudiño. That attractive offers arrive has become an uncertainty, but that Chivas will put it in the showcase to see who is encouraged, take it for granted“

The Sniper, regarding the transfer market, stated that “If they manage this or any other sale, they told me that the Flock will look for a creative midfielder, and for the front, only if the departure of my compadre J.J. Macías will seek reinforcement. Defense is the only line they don’t see how it changes“And added that”It should also be remembered that Chivas has players on loan scattered throughout most of the country, so sports design can also be considered for barter in case they need some other position at the end.“