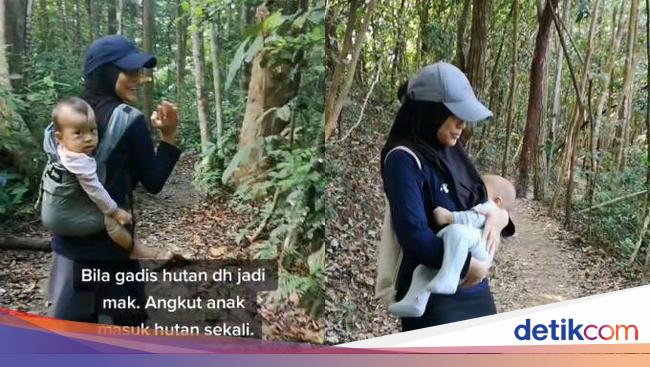 This woman has a hobby of trekking into the forest. When he was married and had children, he took the child to the forest since he was four months old. The woman’s action immediately received various reactions from netizens.

It is Adilah Suhailin Kamaruzaman who admits that she often takes her son, who is now one year and four months old, into the forest. This 29-year-old mother admitted that she herself had been trained by her father to enter the forest since childhood.

Adilah himself graduated with a Master’s degree in Zoology or animal science from Universitas Sains Malaysia (USM). He learns about wild life in the forest. “In the beginning, I took my child into the forest for jungle trekking since he was four months old. Now every month I have to go into the forest with my child,” said Adilah to Mstar.

“First I took him in for a short time from 30 minutes to 45 minutes. After that it was an hour and now we are in the forest for up to two hours at most,” continued Adilah.

Through his personal TikTok account @suekz.ecowildernessmom, he shares his daily activities including uploading videos on how to take children into the forest. Adilah said that he brought his son to the forest accompanied by his husband.

“Since I have a child, I want to introduce nature and reduce the screen on my cellphone by taking it out of the house. I am not a mountain climber, but I am a nature lover. I familiarize my child with the forest so that he loves nature and doesn’t get tired often,” said the woman who came from Besut, Terengganu, Malaysia.

In fact, the housewife once took her son to an indigenous village in Tasik Chini, Pahang, Malaysia and stayed for about two nights. When he volunteered for an organization (NGO) for aboriginal children’s programs.

According to Adilah, she still carries her son who is still fully breastfed and does not make his movement restricted when entering the forest. “We will not only go into the forest as three with my husband, but we will make sure to go into the forest that we already know in terms of safety and the risk of danger,” he explained.

“The most important forest area is child friendly, meaning there are no wild animals and dangerous steep terrain along the crossing,” he added.

Adilah’s post about trekking to the forest with her baby got reprimands from netizens. Netizens who criticize worry about the influence of ethereal beings on Adillah’s baby. However, Adilah even mentioned that she is more afraid of the influence of social media that is not good for the child.

“Every time we enter the forest, we will read a prayer for self-protection. Personally, I’m actually not afraid of ghosts in the forest, addiction to gadgets is more dangerous,” he said.

Adilah doesn’t want his son to become dependent on his cell phone. When he took his child into the forest, he felt grateful that his son was not fussy. This makes breastfeeding easier.

“Children don’t cry when they enter the forest. Every time we take a break, children can walk, play with leaves and get to know other plant species,” explained Adilah.

See also  One of Sweden's greatest artists has been killed. This is how he went from being a child actor to a rapper in a criminal environment.

“Actually, it is easier for children to cry when they enter the mall, maybe because there are many people, such as weddings, so the child cries and does not feel comfortable,” he concluded.

Adilah’s uploads, which brought children to the forest since they were babies, have already received 475.2 thousand views and various comments from netizens. Some are worried and say that every parent’s parenting style is different.

“Worried if he sees “something” and things will come back with him throughout the hiking trip?” asked TikTok user @Nurul Atyka.

“In the forest, how dare you bring a baby. Aren’t you afraid that ghosts will disturb the baby, what if you get it?” ask the account @rara_alicia.

“A mother knows what is best for her children.. trust me 🥰🥰,” said the @Norliza Abdhamed account.

“Other people have different ways of educating and nurturing children… let us do it our way,” said the account @salam-kejauan99.

Adilah then made a video on TikTok about protection from mosquito bites and pig ticks while in the forest. He gave tips to wear children’s mosquito repellent and thin long-sleeved shirts.

“Make sure to use mosquito repellent, the children’s clothes are covered bright and thin. Because dark and thick clothes will attract mosquitoes. Don’t enter the bush area. After you leave the forest, don’t put clothes on the bed and check your body temperature after bathing,” he wrote. be fair.

See also  An unusual city fits into one high-rise: why are a police station, a store, a hospital and all the residents under one roof?