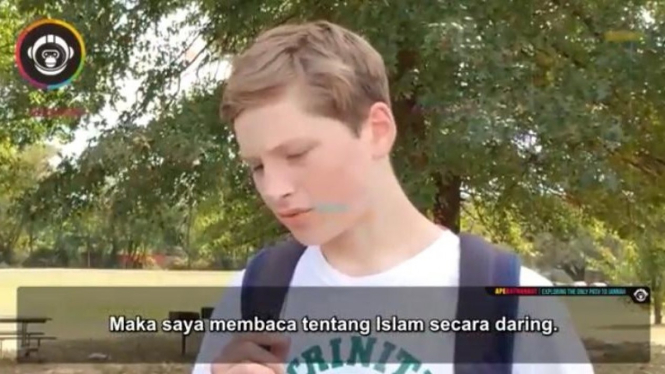 VIVA – A 15 year old teenager from United States of America, Sam Swift has solidified his heart to be one convert or embrace a religion Islam. In a show uploaded to the Ape Astronaut YouTube channel, Sam revealed the reasons that made him believe in embracing Islam.

Initially, Sam claimed to have received information from the media about Islam being linked to terrorism. However, Sam’s parents explain that Islam is not a terrorist religion.

Then, Sam began to read information about the religion of Islam. Sam meets a friend named Ali. At first, Sam mocked Ali. However, Ali always gave a good answer when Sam asked a question.

“So I read about Islam online. And I have a friend, Alhamdulillah, his name is Ali. He is still my best friend to this day,” said Sam.

“But when I asked a question, he answered it. And the answers are very good,” he added.

Sam revealed one of the factors that made him believe in embracing Islam. Sam really admires the discipline that exists in Islam.