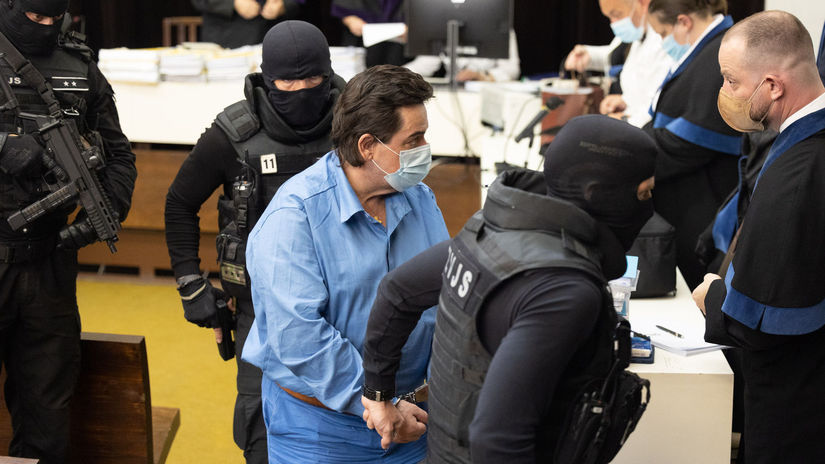 “The Supreme Court found that the court of first instance ruled prematurely, insufficiently reasoned the judgment, evaluated some evidence without interrelationship and also assessed evidence that it did not take,” said Peter Paluda, chairman of the three-member Senate of the Supreme Court.

“If the Specialized Criminal Court had evaluated all the evidence chronologically, it would not have come to the conclusion reached in the judgment,” Paluda explained the decision of the senate, in which Ivetta Macejková and Dana Wäenkeová also sat with him.

The Supreme Court returned the case to Pezinok, but did not comply with the prosecutor’s request that the murder case be dealt with by a senate in a different composition than before. Although the Supreme Court indicated that some of the evidence had not been considered logically.

“A new procedural situation has arisen. The Court of Appeal ruled in favor of our and the prosecutor’s reasons, “said Roman Kvasnica, lawyer for Zlatica Kušnírová, the mother of the murdered Martina.

“It is a satisfaction, justice still exists,” said Jozef Kuciak, the father of the murdered journalist, after the decision of the Supreme Court.

Even prosecutor Michal Šúrek did not want to comment on the decision. “We respect the decision of the Supreme Court,” he said immediately after the statement, adding that we had to wait for a more detailed reasoning for the decision.

“The Senate will receive a binding instruction specifying exactly what to do. It will be under pressure and public control to decide according to the evidence, “said Senate President Paluda after the meeting.

VIDEO: Prosecutor Michal Šúrek on the verdict of the Supreme Court.

According to the Supreme Court, however, the release of Kočner and Zsuzs was decided prematurely. “The specialized criminal court did not deal with all the circumstances, did not justify the decision clearly, did not take all the evidence. He assessed the evidence he had taken in isolation, which resulted in an incorrect legal conclusion resulting in an acquittal, “the chairman of the senate emphasized.

The Supreme Court described the communication from the Threema cryptographic application as legally obtained evidence. “The content of this evidence was assessed in a way that does not meet the requirements of the Criminal Procedure Code, because individual parts of the communication between the defendants were torn out by the court of first instance,” he said.

At the same time, the Senate did not comply with the request of the supervising prosecutor, who requested that the case be given to the ŠTS by a new senate and not the one that decided in September. This means that the case should be solved again in Pezinok by the trio of Ružena Sabová, Ivan Matel and Rastislav Stieranka. According to the Supreme Court, no intention was found that they would want to thwart the evidence in any way. The decision of the Supreme Court is valid.

The court itself began at nine o’clock in the morning under strict security measures. In addition to the family, the courtroom was filled with journalists. However, there was the same media interest in hearings in the first-instance decision-making. Only Kočner and Szabó came to the meeting of the Court of Appeal. Zsuzs requested a hearing in her absence. Neither Kočner nor Szabó looked at the Kuciakov family or Kušnírová even once during the whole day.

VIDEO: The full text of the Supreme Court judgment.

See also  Akon: "Dominican Republic is too small for Omega"

On Tuesday, the Supreme Court ruled on the dismissal of the prosecutor, injured families, as well as defendant Tomáš Szabó against the judgment of the Specialized Criminal Court (ŠTS) of 3 September 2020. He also found one of the defendants – Tomáš Szabó guilty of murder of businessman Petr Molnár of Kolárov from 2017 and sentenced him to a 25-year sentence. However, he acquitted Kočner and Zsuzs as innocent at the time.

The other two co-defendants are already legally convicted for pleading guilty. Zoltán Andruskó is serving a 15-year sentence based on an agreement on guilt and punishment, and the court will impose a 23-year-old sentence on Marček. However, after a complaint by the prosecutor on December 2, 2020, the Supreme Court increased it to 25 years.

VIDEO: Marian Kočner and Tomáš Szabó are brought to the hall.

From the morning, the Court of Appeal first read the indictment and then the chairman of the senate, Peter Paluda, also submitted an extensive report on the state of the criminal case. The proposals of the prosecutor’s office, the victims, Szabó and finally Kočner were read until late in the afternoon.

While the prosecution and the injured party criticized the judgment of the Specialized Criminal Court for several errors, the poor evaluation of individual testimonies and evidence, the defense questioned the testimonies of key witnesses – co-defendants Zoltán Andruskó and Miroslav Marček, who had already pleaded guilty.

Andruskó was the broker of the order. He received it from Zsuzs and addressed Szabó in this regard. He called Marček for help. Initially, investigators worked with a version that shot Szabó. However, Marček himself admitted that he was waiting on February 21, 2018 in the summer kitchen in Veľká Mača and watched what Kuciak was doing with Kušnírová in the family house. When the young woman disappeared from sight, he knocked on the front door. Kuciak opened it for him and Marček shot him with two shots. Then he shot Kušnírová in the kitchen.

The three defendants also assessed the testimony of Kočner’s acquaintance and former SIS counterintelligence chief Petr Tóth. At the end of 2018, he handed over Kočner’s phones to the police with encrypted communication, not only from the Threema application, which convicted the accused of arguing murder.

“I propose that the judgment be set aside and the case referred back to the Court of First Instance for a fresh hearing and a decision in a different composition of the Chamber. At the same time, I propose to increase the sentence to 20 years, “asked the court supervisor prosecutor Bohdan Čelovský. Representatives of both families also joined the prosecutor’s proposal.

Tomáš Szabó’s lawyer Ivana Kochanská asked the court to release her client from indictment. Lawyers Kočner and Zsuzs, in turn, proposed dismissing the appeal and upholding the acquittal of last September.

The murder of journalist Ján Kuciak and his fiancée Martina Kušnírová took place on 21 February 2018 in their family house on the outskirts of the village of Veľká Mača in the Galanta district. The death of the young couple shook Slovakia. Thousands of people took to the streets across the country and asked the then government of Robert Fico (Smer) to take responsibility. Interior Minister Robert Kaliňák (Smer), Prime Minister Fico and finally Police President Tibor Gašpar resigned.

Although the public initially doubted that the case would be investigated and the perpetrators brought to justice, in September 2018 the police detained Miroslav Marček, Tomáš Szabó, Zoltán Andruskó and Alena Zsuzsová. In March 2019, Kočner joined the defendants as the client. The trial began on December 19, 2019, one and a quarter years after the murder.