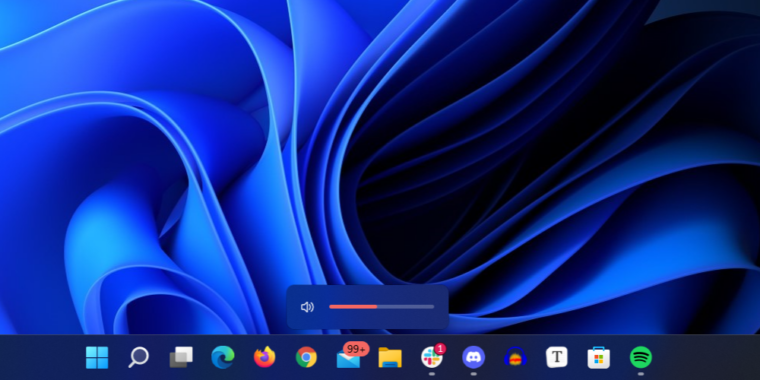 Improving the visual and functional consistency of Windows 11 is shaping up to be a top priority for Microsoft this year, as evidenced by continued updates to core applications such as Notepadand Paint and Media Player, as well as ongoing efforts to move advanced settings from old Windows 7 control panels to the modern Settings app. Restore flexibility in redesigned areas of the operating system Like the start menu and taskbar He was also at the center of interests.

The latest Windows 11 Insider build released to Dev Channel users continues this work, updating the volume, brightness, and other settings overlays to match the more rounded look of Windows 11. New metrics appear at the bottom of the screen instead of at the top left, corresponding to the mode settings Light or dark, and like the Start menu and taskbar, they use the Mica pattern to match the background color of the screen.

Other changes in this preview are very small; “Apps and Features” in the Windows + X context menu has been renamed to “Installed apps,” the audio accessibility feature can be pinned to the taskbar and Start menu, and the Clock app can be unpinned. Exciting moments!

We don’t know when the changes that are currently being tested in the Dev Channel will be released to the general public. Others may have to wait for the first major maintenance update for Windows 11, version 22H2, which will be released later this year.