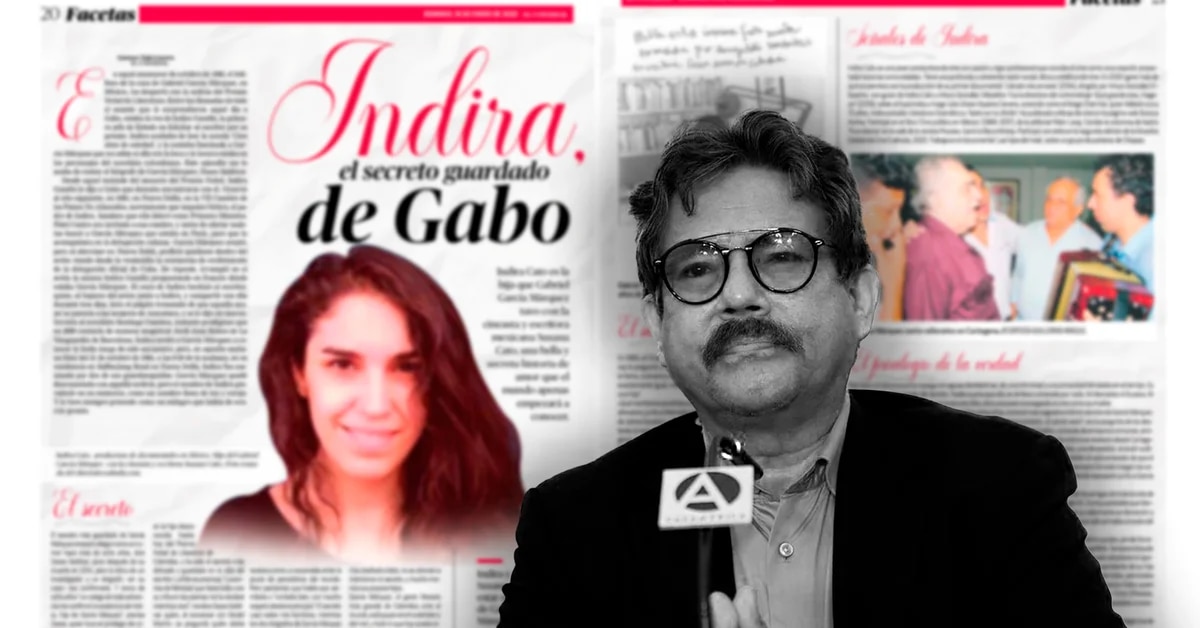 Gustavo Tatis’s article went around the world with his revelation.

Since Sunday, January 16, 2022, the world knows that Gabriel Garcia Marquez has a daughter, called Indira Cato, is a film director, is just over 30 years old and is the result of an extramarital relationship with the Mexican journalist, writer and filmmaker Susana Cato. According to later journalistic investigations, Susana and Gabo met in Cuba, while she was studying at the San Antonio de los Baños International Film School. The news, which presumably had global reach, shook Colombia, even in the hectic political times that the coffee country is experiencing on the way to the crucial election on May 29.

Behind the revelation, there is a story to tell: secrets kept for decades, the shadow of the patriarchy that hangs over the history of Gabo’s family for several previous generations, economic issues to be resolved – the work of the Nobel Prize winner is an appreciated commodity of the cultural industry-, a trip to India with Fidel Castro, a photo of the writer with the baby in his arms and… A Colombian journalist, poet and essayist, close to the writer and confidant of several of his relatives, who published the news on a double page of the newspaper The universal from Cartagena under the title “Indira, Gabo’s secret”.

From the beautiful Caribbean city, Tatis takes some time before responding to Infobae Cultura about how much his life has changed a week ago. “I don’t think this news has changed me. I continue my work, which I have done every day for almost more than 40 years without stopping,” he says in the firm and rhythmic tone with which Colombians speak (very well) Spanish. “I simply wanted to reveal, tell a truth that was kept for 30 years. And I think I have managed this with a very calm hand, without letting myself be dragged by the waves of these waters. I would like to meet Indira and Susana at some point that life allows me”, he concludes.

“The most kept secret of García Márquez began to arrive as a rumor more than eight years ago, says Dasso Saldivar, shortly after his death in 2014, but the ethics of a researcher and a biographer – in his case – was to confirm it. And about eight years ‘a colleague of all solvency confirmed the existence of Indira, daughter of García Márquez’, specifies Dasso, who had the privilege of seeing for the first time the moving photograph of the girl sitting on Gabo’s lap”. Thus begins the text of Tatis that went around the world.

“Indira’s name has been with us all these years, as the most sacred and intimate secret of García Márquez. And we hoped that the years would mature the precise words to tell it. When will it be?, was the question of the efforts at dawn. We look for ways to reach Indira and Susana, their mother, and through common emissaries, friends of the García Márquez family, their children, and Susana Cato, we told them that the news would be revealed from Cartagena”, Tatis wrote in his article.

There he also adds that “Rodrigo García Barcha, Gabo’s eldest son, gave a wink in his book Gabo and Mercedes, a farewell, subtly alluding to his father’s private life at the funerals at the Palacio de las Bellas Artes. He is also aware that the secret will be revealed with much respect to the two families, long before he and his brother Gonzalo bring the ashes of Mercedes Barcha to Cartagena de Indias, to the Cloister of La Merced, in March, where they will rest. with Garcia Marquez.

With such an announcement, Tatis’s phone exploded with calls and messages. With patience, he attended to the cataract of journalistic requests. “A little before the death of Gabriel García Márquez, the rumor reached me, and throughout these eight years, the rumor disturbed me and I verified if the information was true,” he said in a radio interview with On the radio. In his extensive note, the Cordovan journalist -born in that department, about the Colombian Caribbean- assures that he confirmed “the news” with the biographer, relatives and one of the artist’s best friends. According to his story, during this time the secret was kept out of respect for Gabo’s wife. “We hope that Mercedes died to disclose it,” he adds.

“Once the secret is revealed, what follows is to value and get closer to the work of this pair of women, who shine with their own light and have also built a work, both Susana and Indira,” Tatis tells Infobae Cultura. To his understanding, the task came this far. “I do not make moral judgments, I know that In the Caribbean we have lived through several centuries of patriarchal societies… That will be up to researchers, sociologists, to delve into the social contexts in which these realities are produced”.

And go on. “If one begins to reflect and unite the mysterious threads of time, one will find that in Colombian society, for more than a century from 1886 until the new constitution of 1991, children born of extramarital relationships were not recognized. Brutally, they were called bastards, euphemistically ‘natural children’. And he adds: “In the note that I published, I realize that -and this is a verified fact- García Marquez does not have the last name of his paternal grandfather. He has his grandmother’s last name. García Marquez would be called today Gabriel Martínez García but since his father was denied, and his grandfather was not recognized, Gabo’s father adopted his mother’s surname, which was Algermira García.

Once the news was published, the voice of the García Marquez family was expected (and obtained). Then it was learned that Indira, 31, has “very good relations” with the family of the Nobel Prize for Literature, according to what she told the agency Eph, Gabriel Eligio Torres, nephew of the writer. The same relative confirmed that the girl bears her mother’s surname because it was Susana who “made the decision not to take the surname García Márquez.”

“It is news that it does not take us by surprise as a family”, he told the agency AP Shani García-Márquez, a niece of the writer. “As a family we have always been very respectful of decisions, acquaintance with our cousin dates back many years. Our parents somehow always told us that the will was the reserve and it has always been handled that way, “he added. From Mexico, there is silence. In Tatis’s note, it is ensured that everyone there who knows her knows that Indira is Gabo’s daughter, but that nobody said-says anything. Neither Susana nor Indira Cato spoke before the press until now.

The newspaper El Colombiano published a photo of García Márquez with a baby in his arms.

As soon as the news broke, a photograph reached the Medellín newspaper The Colombian: García Marquez with a big smile and in his hair with the first traces of middle age, holds a baby. “The leak was taken into account because whoever passed it on was part of the circle of friends of the García Barcha family,” says the text that accompanies the publication of the image. “That photo reached the address of our newspaper as soon as the news was known,” he says. Angel Castano Guzman, editor of the Culture section of El Colombiano. “We checked the reliability of the source and decided to publish it. The age of Indira that was revealed and the physical appearance of García Márquez at that time also coincide, when he was close to turning 60, “adds the journalist.

Fidel Castro with Indira Gandhi, on his visit to India.

And why is it called Indira? That is another small story, subsidiary to the main one, to be told. Tatis wrote in his note that once, over lunch, he asked García Márquez what he would name a daughter, if he had one. “Virginia,” Gabo replied, by Virginia Woolf. “But it is very likely that at that moment when I formulated the question, Indira was a dream of the gods”, concludes the journalist. The introductory text of the text tells the story of the admiration of the famous prime minister of India, Indira Gandhi, for the credit of Aracataca, his call the day it was learned that he had won the Nobel and how they finally met on a diplomatic trip by Fidel Castro.

The rebound of the news reached as far as India. The editorial of the English-language newspaper The Indian Express, in its edition of Friday the 21st, linked the name of the Mexican documentary filmmaker with that trip. “The story goes that the first thing asked by Mrs. Gandhi, who was at the airport to receive her ‘brother’ Castro, went for Márquez, who had not yet disembarked. Márquez reportedly told a Colombian diplomat that on the third day of the visit he felt as if ‘Indira would have been born in Aracataca’”. Not there and just under a decade later, another Indira was born in Mexico City.