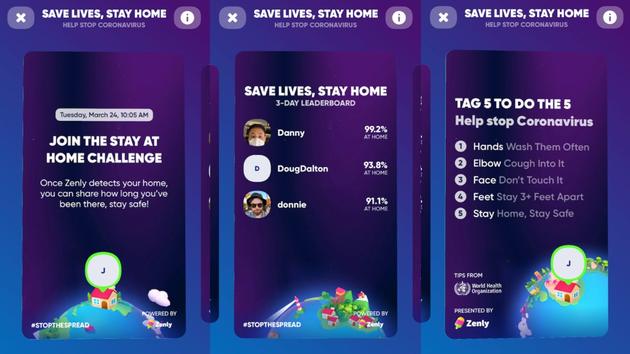 In many ways, containment can seem boring. Without teleworking, dependent children or courses to be revised, defying the prohibitions to take advantage of the blue sky becomes a formidable temptation. To discipline those who fail to take health measures seriously, many governments around the world resort to fines. The Zenly app, on the contrary, decided to make containment fun.

Usually, this French application founded in May 2016 and bought by Snapchat in May 2017 encourages its users to go out and explore the world thanks to a map where they can locate all their friends in real time. Coronavirus forces, she was forced to adapt. To do this, Zenly followed an idea suggested by Josh Constine, a journalist for the American media TechCrunch.

“Someone created an application that would gamify containment. We would gain points if our GPS signal does not move very much. ”

Health advice and an updated map

The developers of the application have thus developed the “Stay At Home Challenge”. This new feature determines, if users wish, the percentage of time spent at home in the past three days. They can also find out the score of their friends, who are ranked in a top 5 based on their results. The best of them are designated as “Real heroes”.

“We want to reverse the trend of thinking that spending too much time at home is not very cool, in order to participate in the containment of the epidemic and thus make our community proud”, Antoine Martin, CEO of Zenly, told TechCrunch media.

“Challenges” are a phenomenon that is deeply rooted in social networks. In 2014, internet users were passionate about the “Ice Bucket Challenge”, which aimed to raise funds to support research around Charcot’s disease. Since then, the challenges have become small challenges to be met or dances to be copied and published online. The Chinese application TikTok does not hesitate to issue its own challenges, or to offer brands to launch their own.

»READ ALSO: The” challenges “, the challenges that make the web go round

In recent weeks, the application has already added many new features related to the coronavirus. In addition to being able to superimpose a surgical mask filter on their profile photo, users have health advice and links to information from the World Health Organization. Zenly also offers a world map which allows you to discover the number of cases recorded in each country, as well as the number of people healed. This map is updated three times a day, using data from Johns Hopkins University.