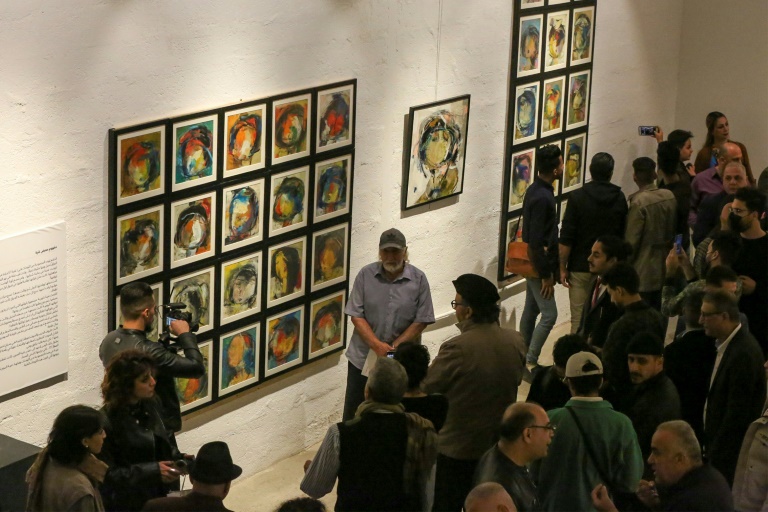 Godot in Baghdad, a book fair on the banks of the Tigris, concerts and exhibitions galore: in the Iraqi capital, after decades of war and deprivation, the art scene is boiling.

Close to a gym and a sleekly decorated café, it has been barely a month since The Gallery opened its doors.

But when the exhibition hall organizes a vernissage, there are dozens of them waiting on the sidewalk. Tonight, they will contemplate the brightly colored abstract paintings by Riyadh Ghenea, an Iraqi-Canadian artist paying homage to his late mother, Ghaniya.

“Ghaniya is the homeland, Ghaniya has suffered from all the phases that Iraq has gone through”, says the artist, with a pointed mustache and a black tuxedo.

Returned to Baghdad in 2011, “I found neither my mother nor the country I had left,” he adds.

Usually, the Iraqi capital makes the headlines of the international press for charged, and violent geopolitical news.

But behind the scenes, despite the pandemic and political tribulations, a timid cultural renaissance has continued in recent years, recalling the golden age of a capital historically considered a hub of creation in the Arab world.

Galleries open, festivals follow one another, attracting crowds eager to make up for lost time after repeated conflicts.

There was the American invasion of 2003 which overthrew Saddam Hussein and then the years of sectarian violence. Until the rise of the jihadists of the Islamic State (IS) group and the bloody attacks.

Amir’s childhood? “What wars”, admits this 25-year-old pharmacist, employed in a public hospital: “There was zero interest in art”.

In front of The Gallery, he admits that his hobby is cinema, short films and Christopher Nolan. “Art allows us to heal the stress of our daily life,” says Amir.

Between the coronavirus, the bloody crackdown on the 2019 anti-power protests and political tensions, calm in Baghdad hangs by a thread.

In an Iraq rich in hydrocarbons but where public funding remains too modest, it is mainly individual initiatives or those of foreign cultural institutes that drive artistic life.

“We are like in any country, we have the right to have art for our entertainment,” said The Gallery director Noor Alaa al-Din, dressed in a black elephant-leg suit. “People thirst for art, they want to develop their artistic taste, it’s an escape route,” she says.

On a balmy November afternoon, several thousand visitors gathered on the banks of the Tigris. For its eighth edition, the “I am Iraqi… I am reading” festival is distributing 30,000 books free of charge, all specialties combined: literature, philosophy, foreign languages.

Volunteers listen to requests and offer titles to visitors. Nearby on a platform, a singer recites Iraqi folklore music, accompanied by an oud and a santour.

In a joyful atmosphere, the crowd mixes: young people in their Sunday best, slicked back hair and fitted costumes of modern dandies, couples accompanied by children, senior ladies enjoying an outing with girlfriends.

An equally enthusiastic mobilization accompanied the second edition of the International Theater Festival, organized at the end of November by the Ministry of Culture.

“In the early days, there weren’t enough seats” for the public, enthuses the director of the Al-Racheed theater, Ali Abbas.

On the program: free shows and troupes from Egypt, Tunisia, Germany or Italy. But also Iraqi artists, like the director Anas Abdel Samad who presented his play “Yes Godot”.

Mr. Abbas admits that “the situation has changed drastically” compared to his beginnings in 2007: “In the past, the Iraqis themselves were afraid to go out on the streets”.

German actor Hanno Friedrich came to perform his play “Tyll”, adapted from a novel mixing European folklore from the 30 Years War in the 17th century. He was coming to Baghdad for the first time. “We were told” don’t go there, it’s dangerous “, admits Mr. Friedrich, 55 years old.

Interaction with the Iraqi public? “People went on stage and hugged us. They told us they had never seen anything like it. We had goosebumps and tears in our eyes ”.