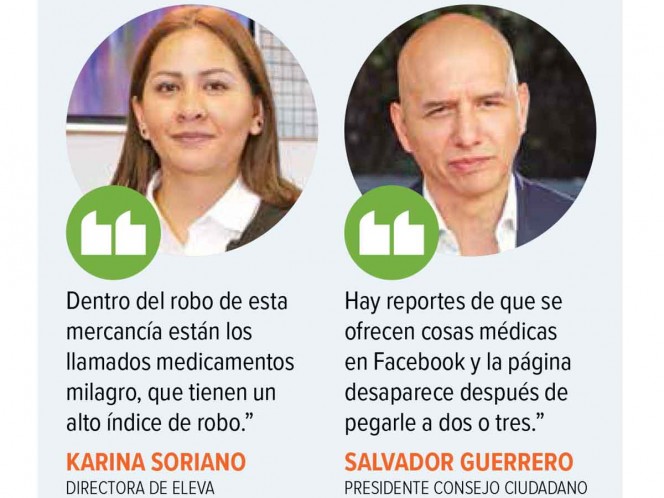 Theft of medicines and vitamins grows 80%

Theft without violence of these products has increased by 80% in the last two months in the mayoralties of Miguel Hidalgo, Benito Juárez and Álvaro Obregón, according to reports by Eleva (Variable Legal Strategy), a legal consultant dedicated to the care of criminal matters affecting the heritage of different industries.

“Among the theft of this merchandise are the so-called miracle drugs, which have a high theft rate, as well as vitamins and supplements to improve performance in people dedicated to exercise. The latter are stolen for personal use or for sale on the black market, since it has been detected that a large part of the stolen ends up in the sale of social networks or street markets with a lower cost than a particular business, “said the general director of the company, Karina Soriano.

The specialist warned about the risk of consuming medicines or pharmaceuticals for a lower cost, since the people who go to the markets on wheels to acquire them do not know that they can find the alteration of this merchandise, expired expiration dates that threaten their health and, Above all, buying something that was obtained illegally, before which they also commit a crime.

Despite the fact that in Mexico the so-called simple robbery is not classified as a serious crime, the specialist pointed out that minor crimes are usually the beginning of a criminal career.

“Complaints about this type of robbery, that is, those with low amounts or without violence, are infrequent, since they have the idea that reporting takes time away from Public Prosecutors and there is fear of some retaliation for whoever is responsible, in addition to the fact that many of the companies consider that they will not obtain anything by bringing the person who committed the crime before an authority and that person will obtain their freedom immediately, ”said Soriano.

In the Secretariat of Citizen Security, it was reported that, so far, no person has been detained for any theft of medications, in addition to the robberies and looting reported in Mexico City in the last two months have been aimed at household appliances, wines and food.

The CDMX Citizen Council for Security and Justice has received complaints of alleged sales of medical products that are offered online and after being paid, the sites disappear.

“There have been reports that medical things are offered on Facebook and the page disappears after they managed to hit two or three people or who knows how many people, because whoever reports is a small part of the victims,” ​​said Salvador Guerrero Chiprés, president. of the Citizen Council.

He added that this type of fraud has been orchestrated since last year, when this agency denounced the presence and sale of false and expired medicines in street markets.

Also, Mario Salomón, a specialist in private security, pointed out that in recent weeks they have detected a new form of crime that is to disguise themselves as biosafety personnel who come to sanitize or offer a preventive service against COVID-19 to assault businesses and homes.

In addition to the theft and counterfeiting of medical products such as mouth guards or antibacterial gel.

“We have already seen many cases in Mexico City of counterfeiting and sale of medical devices, also in the provision of health care, the interest and the demand they have, that is what criminals have used to deceive them so they can enter real estate and the houses to steal, ”said Solomon.

Copyright law strictly forbids copying Excélsior materials in whole or in part without prior written permission and without including the link to the original text.