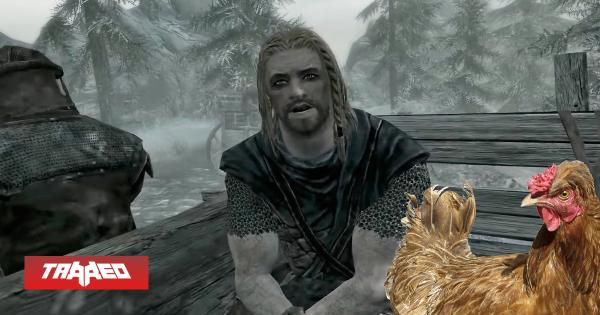 We have all had our newbie moments when we first faced a video game – in my case dying by wolves in AOE-. As we progress through the story or discover areas, sometimes we make mistakes which we generally understand or, as in the following case, cause us concern or surprise.

The Elder Scrolls V is on its way to turning a decade and obviously there are many gamers who have never touched it or did not even know about it, but, above all, they do not know some strict rules that many of us also learned the hard way. In this case it is: you must not kill chickens.

For those of you who don’t know, in The Elder Scrolls V: Skyrim the villagers take care of their chickens like sacred animals. So much so that if you attack one, not only will the owner attack you, but they will ask for help and you will even be chased by guards. In fact, many times they will remember you as a chicken killer and if you manage to flee, when you return to the village they will start chasing you again.

You can read: Mod brings “Skyrim’s Granny” into the game as a follower, and Shirley herself lends her voice

All this remembered by a subreddit from Skyrim, where the community has been helping and laughing at a gamer who cannot understand why he was killed in the game just for attacking a chicken.

Obviously highlights the comment of the user AggdyFehg who says: “because chickens are sacred animals in all video games” or the gamer himself who took the opportunity to ask “Only chickens I have to avoid?”.

See also  The more it shines, the more fun revenge of love Netizens have raised Channel 3 to return the form!

A teaching that clearly Yungjo345 will not forget, who also took the opportunity to ask “Any other deaths to avoid?

And you, do you have any deaths in a video game that you still remember with shame?