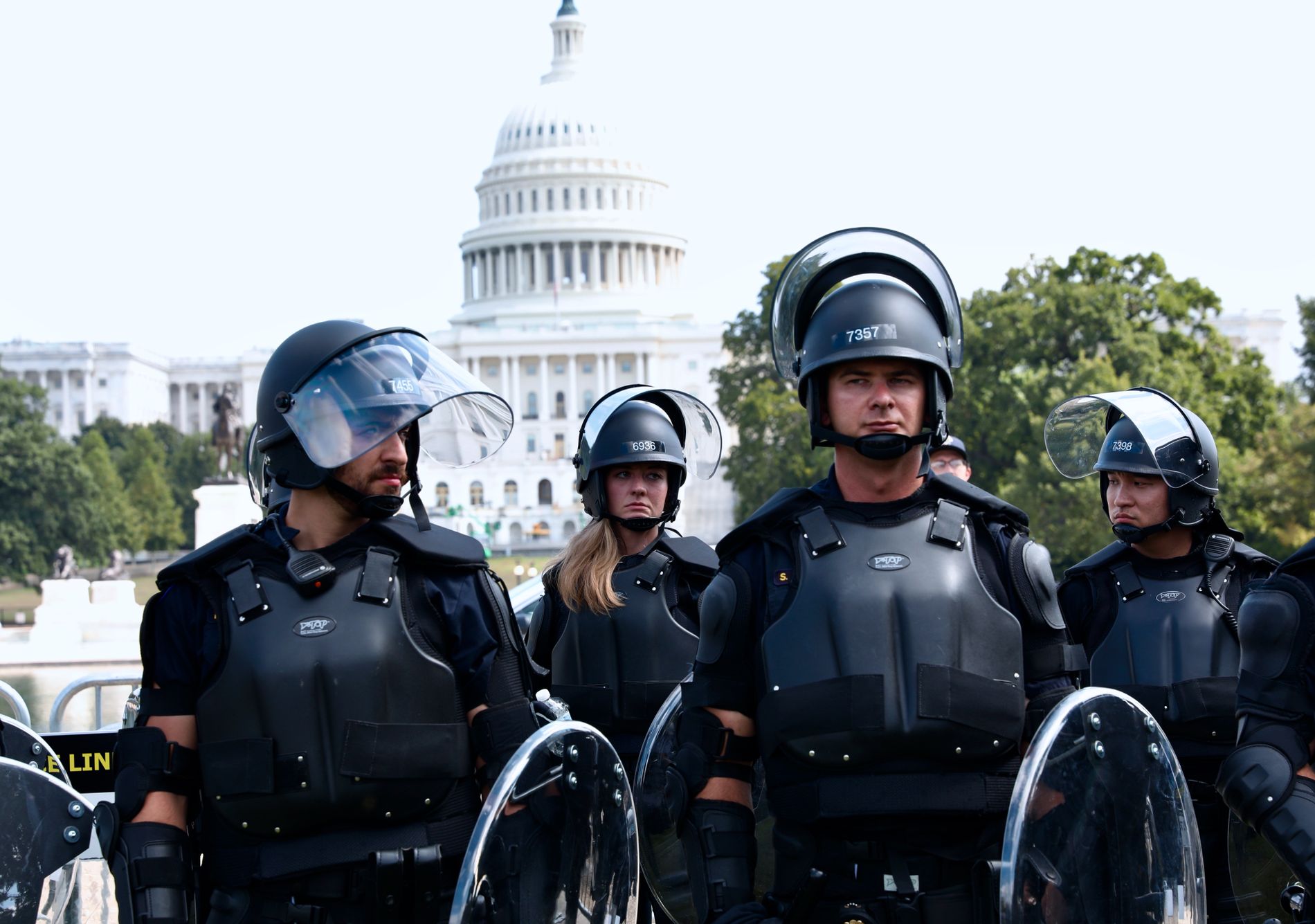 WASHINGTON DC (VG) It was expected that up to 700 would participate. The congress was surrounded by high fences and the National Guard was ready to move in when needed. But the “Justice for J6” demonstration drew only a few.

“Better safe than sorry” has perhaps never been more appropriate than to describe the police presence during the demonstration in support of the congressional storms.

The area around the Congress was cordoned off, and in order to control the masses that were expected, bulldozers were parked close to each other.

Heavily uniformed police guarded the first barrier at The Capitol Reflecting Pool and the National Guard was ready to move in if things escalated.

BACKGROUND: US capital on standby: – ​​Takes no chances

The contrasts could not have been greater until thousands of Trump supporters and right-wing extremists took orders from former US President Donald Trump to “march against Congress.”

Of the 700 who were expected to possibly participate, only a few showed up.

But the message to those present was still clear:

– I support those who were arrested that day, says Steven Zabinski and holds on to his sign that says “Support for January 6th patriots”. Support for the January 6 patriots, in Norwegian.

Zabinski is of the opinion that the prisoners are political prisoners, and that they are being treated inhumanely by the American judiciary.

“I never thought we would see political prisoners in the United States,” he says, adding that he had never imagined that those who stormed Congress that day would be “thrown in jail” and “left there.” .

Five people lost their lives as a result of the storm and close to 140 police officers were injured. Hundreds have since been prosecuted in what has been described as “the biggest digital crime scene in history”. In total, the police will sit for over 15,000 hours with video.

On the stage during the support demonstration, letters were read out from spouses and parents of those who are imprisoned.

A woman compared the treatment the Congress storms receive in prison to how the Jews were treated during World War II.

For the record: This statement is not true.

It is also claimed from the rostrum that many of those charged did not commit acts of violence, and that they only exercised their constitutional right to participate in a political protest.

“I want to see him in jail for murder,” said protester Lory Smith.

She is referring to police officer Michael Byrd, who during the storm fired the shot that killed Ashli ​​Babbitt as she and several others tried to break in through a police roadblock inside Congress.

Smith is of the opinion that Byrd should be punished as Derek Chauvin – the policeman who killed George Floyd – was punished. He was given 22 years and six months for murder.

Background: The Floyd family of VG after a historic verdict: −We celebrate this punishment

Lory Smith took the trip to the capital from Arizona.

However, she emphasizes that she does not support those who took part in the storming itself – at the same time as she says that they are now being treated in an “inhuman way” in the prison system.

According to American press is around 60 – out of 610 who are prosecuted – still behind bars. These have been identified as a threat to public safety.

Trump showed this week their support for the protesters – nevertheless, few politicians participated, with the exception of Congress candidate Joe Kent.

He too has received support from Trump, after he decided to take up the fight against Republican Jaime Herrera Beutler who voted to trap Trump in the Supreme Court indictment.

– This is good. It is a peaceful event where 200-300 show their support and exercise their constitutional right, he says to VG.

Also read: This is how police officer Harry Dunn experienced the Congress storm

Police in riot gear stormed a rally on Friday, removing hundreds of protesters by truck.

One of those who chose to counter and stood in the middle of the protesters was Medea Benjamin.

– I was furious during the storm on January 6. Our task is to build democracy further, not support a coup. The fact that they stand here today and support what happened, and call them “political prisoners”, is completely unheard of.

– Now they are arrested and charged, and that is the right thing to do. We fight against fascism and coups and we stand up for our democracy. Those who try to break them down must endure the consequences.

Prior to the demonstration, it was speculated whether the far-right Proud Boys would participate – but on the encrypted messaging service Telegram, the group warned against showing up.

A few arrests were made and one person is said to have been arrested for carrying a firearm.