This is the “ultra rare” metallic blue bee that appeared in Florida: they believed it was extinct

Florida researchers recently found a copy of calamintha bee, an “ultra rare” species that it was believed to be extinct, and that it had not been seen in nature for years.

The insect, in a striking metallic blue color, lives only in an area of ​​Florida, in Lake Wales Ridge. It is a region located in the center of the state, which is internationally recognized for the richness of its ecosystem and for hosting numerous threatened species from the United States.

There, the calamintha bee has only been detected in four areas covered in pine thickets, They comprise a total area of ​​about 41 square kilometers.

“The bee was found in four places when it was first discovered in 2011. The last study, conducted in 2016, investigated three of these places and the authors only found the bee in two of them“he explained in statements to Univision the postdoctoral fellow at the Florida Museum of Natural History, Chase Kimmel. 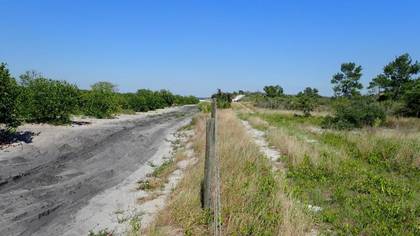 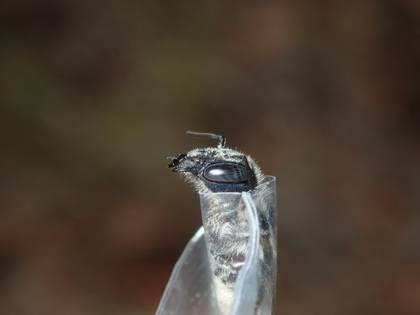 That was the last time the species was observed in its habitat. After 2016, the bee disappeared, and was not seen again until March 2020, when Kimmel toured the area and confirmed that the insect was not yet extinct.

“I was open to the possibility of not finding the bee at all, so when I first saw her in the field, it was really exciting ”Kimmel said in a statement released by the museum.

“We observed a small bright blue bee clutching [una flor] and rubbing his head on the top of the flower, two to three times, “Kimmel explained.” That behavior is unusual and is a unique feature of the blue calamintha bee. We were very surprised to see it, “he added.

The Florida researcher surprised the scientific community by recording the insect not only in three of the previously known locations, but in others. six additional places, about 80 kilometers from there.

“Our findings validate that the bee is still present and that the known range is greater than previously thought. However, it is still very rare and can take many hours and days to find ”, clarified the author of the study.

Why is the finding so significant? 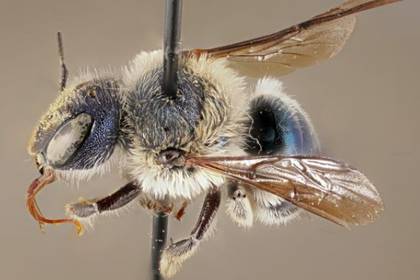 The bright blue color of the Calamintha bee and its limited location are not the only rarities of this insect.

Blue calamintha u Osmia Calaminthae has unusual facial hairs which he uses to collect pollen. When visiting the flowers, he moves his head back and forth to collect as much pollen as possible with the hair, a behavior that is unique to this species.

In addition, to carry out its pollination work, it depends on a plant that is also threatened, known as “Ashe’s Calamint”.

“This is a highly specialized and localized bee”Kimmel explained. 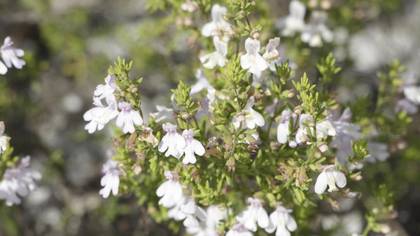 Unlike other types of bees, the blue calamintha is a solitary animal, which creates individual nests instead of hives. These are usually found in burrows, hollow stems, or holes in dead trees, making it even more difficult to locate.

Despite the importance of the discovery of Kimmel, who works together with Jaret Daniels, director of the McGuire Center for Lepidoptera and Biodiversity, investigation efforts have been thwarted by COVID-19.

“If it weren’t for COVID-19 we would have had a lot more people in the field, so it has definitely reduced our capacity, “said Jaret Daniels in the statement. 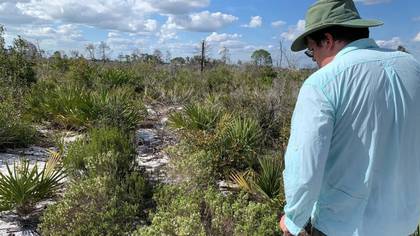 The study seeks to determine the current population of blue calamintha and its distributionas well as researching their nesting and feeding habits. One of the objectives, for example, is to discover if the species is a pollinator of some other flower, in addition to the “Ashe’s Calamint”.

With their results, they hope to help the bee be protected by the Endangered Species Act.

“It takes an army to make this happen. It couldn’t be done without all the assistance that makes a project work to generate good results.”

Four myths about the “killer hornet”, the insect that causes fear in the US

The killer hornet threatens the US: how likely is it to spread across the country?

The fight to the death between a mouse and a murderous hornet, the invading insect that worries the United States

“There is no need to panic”: UNAM scientist denied the presence of the “murderous hornet” in Mexico

Mai Abdel-Hamid: launching units ready for delivery in the Upper and Lower Egypt next...
Read more

“I did not accept Zidane’s apology after the game, went to the toilet and smoked 250 cigarettes in 10 minutes,” Sagnol reports on the...

Ex-defender of the French national team Willy Sagnol recalled the defeat in the final...
Read more

How weight loss can be a key to surviving corona disease!