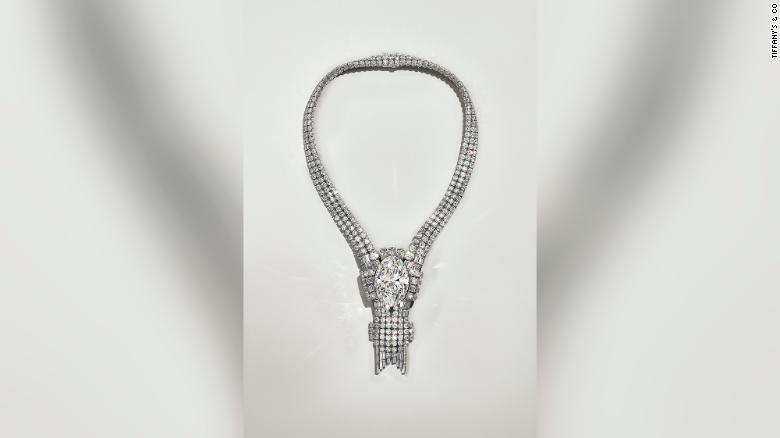 The most expensive piece of jewelry in Tiffany history 0:47

New York (CNN Business) – Tiffany & Co. has just unveiled its new most expensive jewel.
The necklace “The World’s Fair Necklace”, unveiled this Sunday in Dubai, features an impressive 180 carats of diamonds in platinum. Its centerpiece is an 80-carat oval, flawless, D-colored “Empire Diamond” (the highest grade and virtually colorless), named for the iconic jeweler’s hometown. The Empire diamond was ethically sourced in Botswana, cut and polished in Israel, and assembled at Tiffany’s workshop in New York.

Tiffany said the necklace is the most expensive piece ever created by the brand.

The good news for deep pocket jewelry lovers is that this necklace is for sale, unlike the famous 128.54-carat “Tiffany Diamond” which Tiffany says is priceless and cannot be purchased.

The luxury retailer has yet to price the “The World’s Fair Necklace”, but industry experts they estimate its value to be between US $ 20 and US $ 30 million.

Tiffany’s diamond jewelry is famous for having adorned celebrities for decades, from Audrey Hepburn to Beyoncé Knowles. Beyoncé made fashion history by being the first black woman to wear the iconic 128.54-carat Tiffany diamond for Tiffany’s new “About Love” campaign.

The Empire diamond, set on a platinum ring.

The retailer said the “World’s Fair Necklace” design is inspired by a Tiffany necklace made for the 1939 World’s Fair held in Queens’ Flushing Meadow-Corona Park. That design featured a 200-carat aquamarine stone and more than 400 diamonds.

The reimagined World’s Fair necklace can be worn in an unexpected way: the wearer can carefully remove the Empire diamond and set it on a platinum ring, with the help of a Tiffany jeweler who will be on call whenever that service is required. Naturally.