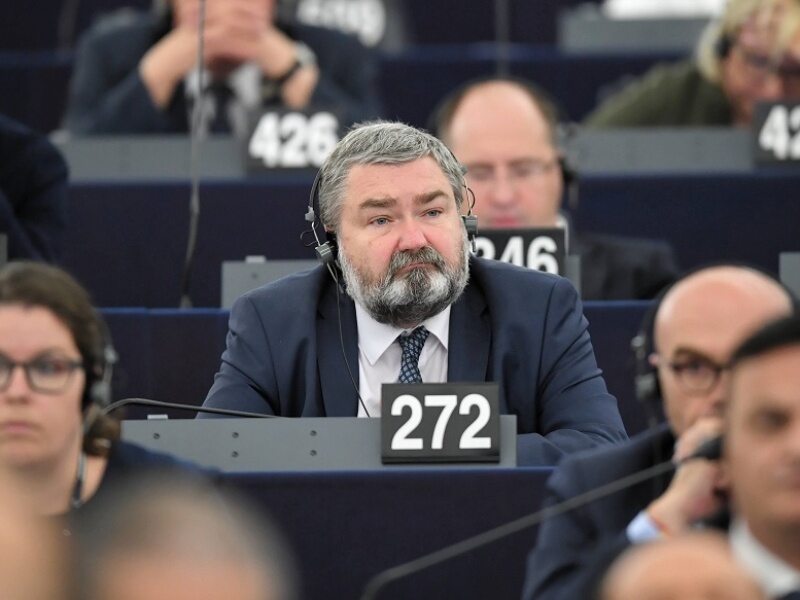 DoRzeczy.pl: Representatives of European Union countries have agreed on a plan to reduce gas consumption. The plan to exterminate that there will be no requirement to share the raw material, and the position was to be created under the influence of the Polish delegation. How do you evaluate this decision?

Prof. Karol Karski: It is very good news that no mechanism has been introduced that would allow the Germans to rob other countries of the gas they have carefully stored at home. Of course, we have to wait for the final solution, because the devil is in the details. However, it must be admitted that the behavior of German politicians in this matter is truly peculiar, sometimes pathetic.

The German state led to this crisis. In fact, it was Germany – conditio sine qua non – that indirectly led to the war in Ukraine. It can be said that the German-Russian actions once again led to a tragedy, because World War II was also the result of the rapprochement of these countries, it began with the Ribbentrop-Molotov pact, and it is worth mentioning that some time ago Radosław Sikorski commented on the issue of Nord Stream1, compared it to this pact. Please remember that Germany had an interest in this. Russia was to earn money on gas, and Berlin on its transmission. It was not a prank or a whim of one of the ruling teams of Angela Merkel’s rule, but a long-term operation, started under Gerhard Schröder. It is a constant element of the activities of the German state. We all remember how German politicians on the right and left hypocritically said that Nord Strem1 and then Nord Strem2 are an economic project, not a political one. Today we see that this project led to war.

See also  No result of diplomacy, Putin does not stop. World war risk? Now you can't see it

The European Commission has prepared a crisis plan. It calls for EU member states to reduce their natural gas consumption by 15%. between August 1, 2022 and March 31, 2023. How do you assess the idea of ​​saving on gas?

I hope the Polish government will not accept this solution. Poland has guaranteed gas supplies. For many years we have been working on diversification, we have not bowed to the pressure and we have not been fooled by the propaganda that only gas from Russia will be the best solution. We have 99 percent full gas storage facilities, we have a gas terminal and appropriate contracts in this area, and the construction of the Baltic Pipe is completed. That is why we have guaranteed raw material supplies. In my opinion, the idea of ​​saving is to help those who wanted to outsmart others and found themselves in a difficult situation.

If several countries reduce their gas consumption, acting to the detriment of their citizens and the economy, then this gas can be transferred to Germany later. So in this way the back door will ensure the security of the Germans, so that once again someone has to pay for the carelessness of Berlin.

Is coal returning to favor in the European Union, or is it a temporary change of mind caused by helplessness?

The Green Deal has already collapsed. From what I hear from colleagues from the European Parliament, from various factions and countries, no one will openly announce the end of the Green Deal, but it is de facto gone. He’s like a corpse still convulsing, and someone takes it for signs of life. Today we are observing actions aimed at reversing the decisions of Frans Timmermans, the builder of German-Russian bridges. The German woman, Ursula von der Leyen, appointed as the president of the European Commission, announced that it is necessary to temporarily restore the possibility of using sources hitherto unacceptable by the Green Deal, i.e. coal and nuclear energy. However, this cannot be done temporarily. There is no way to temporarily resume coal mining or start up nuclear reactors for a while. Please take a look that the idea of ​​the Together Party has recently emerged, whose representatives held a meeting in the German parliament, where a proposal was made to lease German nuclear reactors by Poland. The local press picked up on this immediately, adding that it would be difficult to lease reactors to Poles, but perhaps we should consider not closing them by the end of this year? In my opinion, this is an obvious act to have an excuse to maintain the reactors. Therefore, I believe that “temporary activation” or “temporary non-closing” may take another several dozen years. Coal must also be mined, it is all over the world. We also have it in Poland, so everything must be done to ensure that the Polish mining industry works efficiently and extracts this raw material.

Also read:
Ziobro: The EC is cheating Poland once again. This is a great scandalAlso read:
The vacancy after Piotr Naimski has been filled. Who is his successor?