New York Mayor Bill de Blasio warned Sunday of the risk of the coronavirus coming back as a “boomerang” if citizens relax precautions, after the good weather has kicked thousands out of the house over the weekend.

De Blasio, in a press conference, warned that an increase in new COVID-19 cases would delay the “reopening” of the city and begged the population to continue avoiding meetings and covering their faces in places where it is not possible to maintain a safe distance from others. 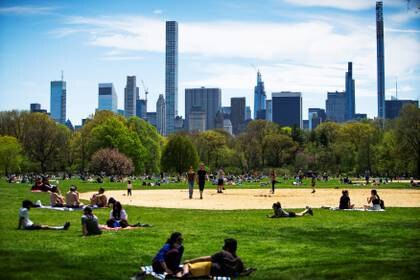 The New York police handed out over fifty summons on Saturday to people who were breaking those rules, mainly in parks, although the mayor stressed that the vast majority of the inhabitants are acting with great responsibility. In addition, three individuals were arrested after an incident that allegedly started because they were not respecting measures to stop the pandemic.

According to the authorities, that episode has led to the opening of an internal investigation, after complaints were received about the actions of the agents, who can be seen violently reducing two young African-Americans in a video that has circulated through the social networks. 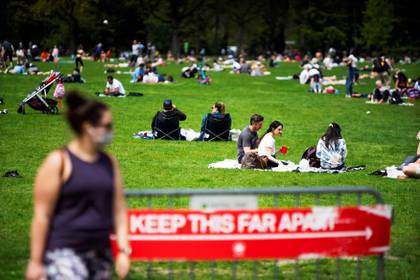 When seeing the images of the New York parks, the mayor warned that there may be a coronavirus outbreak

De Blasio insisted that the police are not going to allow meetings in public places, even if they are small, since they pose a great risk of the disease recurring.

New York has reinforced the police presence in points such as parks, which this Saturday were quite full on a day of good weather and after weeks of confinement.

After dropping steadily for the past few days, COVID-19 deaths recorded a slight rebound on the last day in New York State, the great epicenter of the pandemic in the United States. Governor Andrew Cuomo reported 299 new deaths this Saturday, 10 more than the day before, something that he described as “bad news”, despite the fact that the numbers are already very far from the almost 800 daily deaths that came to be registered during the second week of April.

In total, almost 24,000 people have died in the state since the start of the pandemic. taking into account the probable deaths due to coronavirus that New York City includes in its count. Of the latest deaths, 276 occurred in hospitals and 23 in nursing homes, with a majority of them in the Big Apple, the most affected area with differences.

Meanwhile, the number of new hospitalizations – one of the indicators that most interests the authorities – continues to drop and fell to 831 on the last day, after staying between 900 and 1,000 during the week. 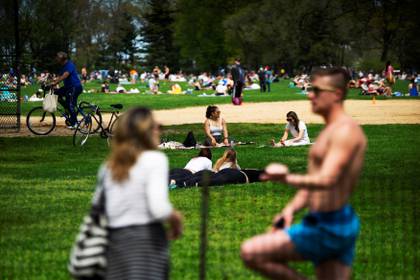 Cuomo said hospitals are being asked for more information on the new patients to try to determine where the population continues to be infected amidst the strong containment measures in place.

The governor, in his daily press conference, also provided new data on the antibody tests that are being carried out in the state to, by way of a survey, have an idea of ​​how many people have suffered from COVID-19. With more than 15,000 tests carried out, 12.3% of people have tested positive, a slightly lower percentage than the 14.9% that had been registered earlier this week, when 7,500 tests had been carried out.

In New York City, the percentage of people who would have overcome the disease rises to 19.9%, although it is also lower than the 24.7% previously registered. Within the Big Apple, the Bronx has an especially high rate, with 27.6% positives, while the rest of the districts are all below 20%.

“Life has to continue”: how Sweden faced the virus without a confinement

AP to use blockchain to record US election results

The news agency The Associated Press (AP) signed an agreement with the startup Everipedia to generate a database...
Read more

Coronavirus: a school with 50 years of history and 500 students closes in Ramos Mejía

"The effects of the Covid19 pandemic pushed the economy to a limit of no return that prevents us from...
Read more

“We are open to being able to listen to River’s need,” said Huracán President Alejandro Nadur

Hurricane you already have your sixth reinforcement. Is about Diego Mercado, 23-year-old midfielder from the last step at...
Read more

The best RGB components for your computer

If you want a computer customized to your style, the best way is undoubtedly to illuminate it with RGB...
Read more

Barcelona, ​​Sep 20 (EFE) .- The Directorate General for Attention to Children and Adolescents (DGAIA) has sent a letter...
Read more

The Colombian Government, through the...
Read more
News

New coalition adds the word ‘culture’ to the portfolio

The new Brabant board coalition has included the word culture in the portfolio of...
Read more

“For the Kesb was clear: The father can do with his child what he wants”

Authorities failureIn April, a girl (8) commented that it will be abused by his...
Read more

Sebastián Rulli is in mourning, says goodbye to his dog Gaucho

The actor Sebastián Rulli he said goodbye to his gaucho dog This week, who...
Read more
Archynewsyarchynewsy.com