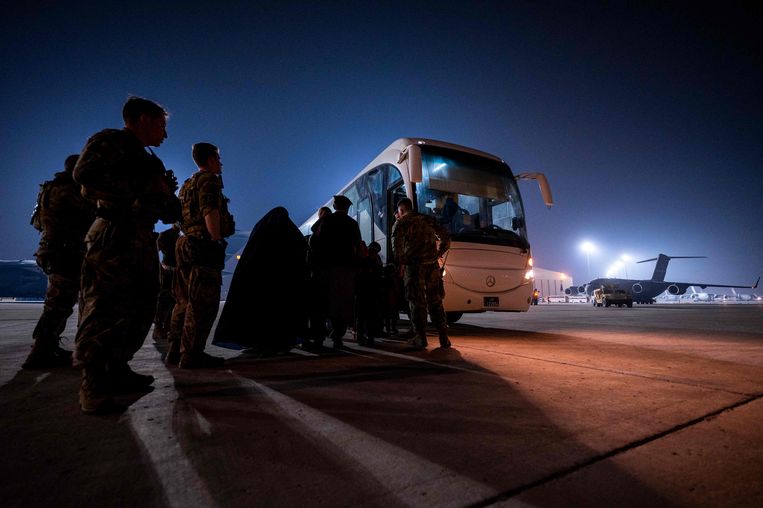 The group was let in at 02.00 Dutch time. The Ministry of Foreign Affairs advises anyone who has not yet reached the airport to return to a safe location and await instructions.

‘I am very happy’, says the Dutch medical student M. ‘The relief is great. It does give me energy now that we’re finally at the airport.’ The man, who was in direct contact with the Dutch ambassador during the bus trip, confirms that all Dutch people from the buses are now in safe hands and that no one was injured. On Wednesday, when the journey started, a ‘young lady’ was taken from the bus to the hospital. She suffered from the extreme heat on the way.

M. mainly experienced the trip as ‘unpleasant, but not anxious’. The Taliban did not threaten the Dutch except for a broken window. “Children were startled several times on the way by warning shots in the air,” says M.

The Ministry of Foreign Affairs had made agreements in advance with the Taliban about safe passage for the Dutch. There were no guards on board the buses. Seven passengers without a Dutch passport, who had secretly entrenched themselves in the bus along the way, were ‘knocked out a bit harshly by the Taliban’, says M. Taliban fighters were in the bus for a while, but left the Dutch alone.

The bus has been traveling for twenty hours from a safe location in the city to the airport. The Dutch got in on Wednesday morning, but soon got stuck in traffic. “Twenty hours without sanitation, you can imagine that for that reason alone everyone is happy to be at the airport now,” says M.

Tens of thousands of Afghans have been trying to get to the airport in recent days, hoping that foreigners will take them and grant them asylum. The final departure date for foreign armed forces is August 31. Before that, the military will need four to five days to evacuate themselves. That is why the gates of the airport are now closed. The American embassy also speaks of a ‘terror threat’ around the airport.

It is unclear how many people with a Dutch passport are still in Afghanistan. For the time being, there is no reason to assume that they will not be able to leave at a later date. Once the foreign military has left and the situation has calmed down, the Taliban plan to resume commercial flights. Anyone in possession of a visa or foreign passport should then be able to fly in and out of Kabul.

See also  The great revelation of Bohdalová! I will say everything, he is shocked