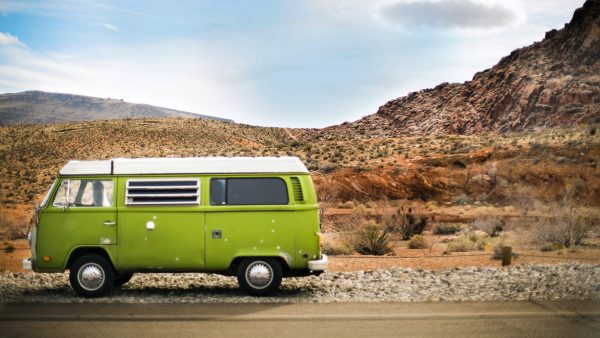 They soon discover that he was dating at least six other women. One of them is eighteen-year-old Bekah King. After a confrontation, all three of them decide to end the relationship. After months of app to share their break-up dealing with the same man, the women finally meet in real life. “We were good friends right away,” says Roberts.

It soon comes up that their ex had told all three of them that it was his dream to travel around in a van. It starts as a joke, but then they think they can fulfill that dream together, King tells The Washington Post. They all have that summer off. “We all worked hard and saved money, so we thought, why not?”

They put together a few thousand euros, buy a school bus and put their shoulders to the wheel to rebuild it together. They renamed the bus the ‘BAM’ bus – a combination of their initials. The vehicle was ready for departure last June. Since then, they’ve been driving from one nature reserve to another, recording their journey on Instagram. They spend the nights on camping grounds.

Although they are now living their ex’s dream, according to the women, it is not a revenge trip. “What this guy did to us doesn’t define our lives,” says Roberts. “We are very happy that we found each other. We are friends for life.”

See also  Who is Diego's father, who is accused of running over 2 women in Iztacalco?