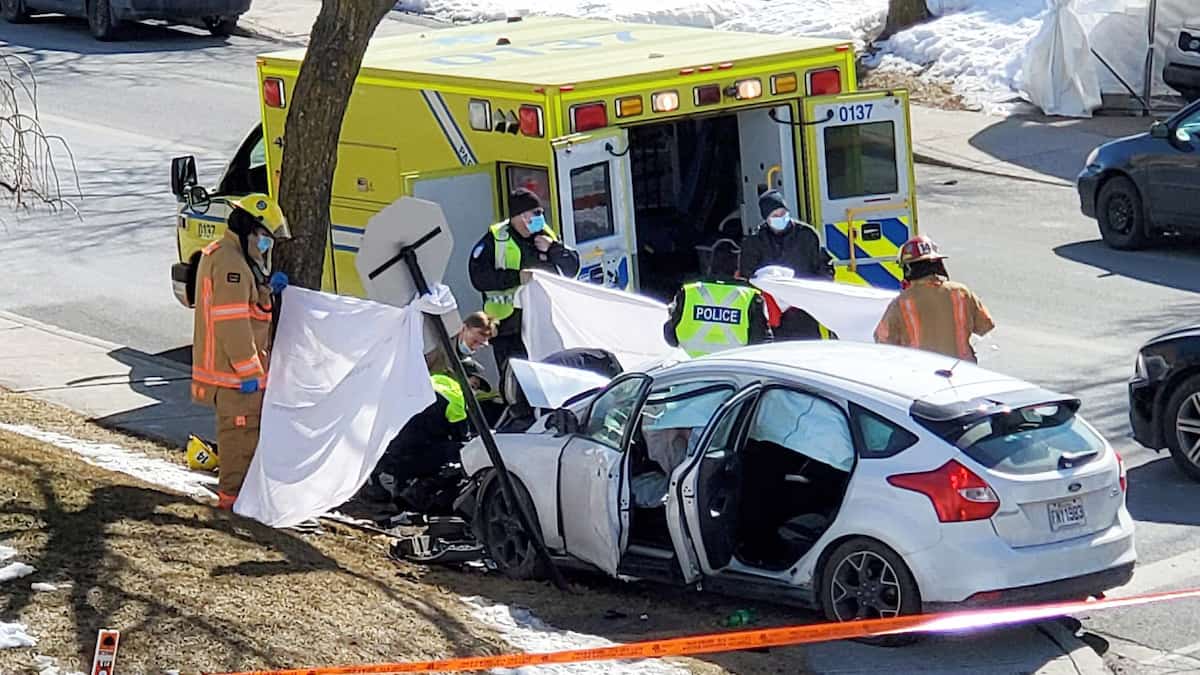 A teenager who left an elder to die under the car she was driving without a license after mowing it down on the sidewalk has escaped an adult sentence, despite receiving the maximum possible for a minor.

“This is the harshest sentence I can impose under the circumstances. You took a series of bad decisions that cost the life of a pedestrian who was shopping, ”lamented Judge Jacky Roy in condemning the teenager yesterday in the Youth Chamber of the Court of Quebec.

• Read also: VIDEO | A victim abandoned under a car with “cowardice”

The accused, who cannot be named under the law, was 17 last March 16 when she committed her crime. The teen, who had no driving experience, had rented a car to an individual on social media.

With two friends by her side, she then started to drive at full speed in the residential streets of the Rivière-des-Prairies district. The police even picked it up at 70 km / h, but failed to stop it.

Aware of the dangerousness of her driving, the accused nonetheless continued her race, until she lost control of the vehicle. Carolina Zollo-Braca, a 79-year-old pedestrian, was then struck.

Investigators had analyzed the scene from top to bottom until late at night.

“She never assisted the victim,” lamented the judge. After committing the irreparable, she left the victim for dead and tried to shirk her responsibilities. “

Since the tragedy, Ms. Zollo-Braca’s family has never recovered.

See also  He is 12 years old and has been eating only yogurt and bread for 10 years!

“She was a devoted woman, in perfect health”, explained her children in a letter read to the court, where they denounce a “senseless act”.

Caroline Zollo-Braca died after the impact.

They explained that despite her age, the lady was her mother’s main support, almost a hundred years old. A few weeks after the events, the latter had to be placed in a CHSLD.

“She is depressed and asks the Lord to come and get her to join her daughter,” the letter said.

Ms. Zollo-Braca’s husband is also devastated, as are her children.

Listen to the news tour of Philippe-Vincent Foisy and Carl Marchand on QUB Radio:

« [Le drame] took a life and ruined a family, ”they explained, adding that to celebrate the life of their deceased mother, a rose sale was made to benefit the Montreal Children’s Hospital.

The accused, who surrendered to the police after being convinced by her mother, pleaded guilty to charges related to her dangerous driving causing death.

But if the Crown thought it was seeking an adult sentence, it had to change its mind after a report that the accused had taken charge of her life.

“We have a great receptivity, since the events, it is completely different,” noted a worker, explaining that the accused, well known to the Directorate of Youth Protection (DPJ), was in the past resistant to interventions. .

But despite the potential for rehabilitation, there was no question that the accused would have a lenient sentence. She therefore received a maximum of three years of custody, including two in a closed establishment of the DPJ.

“The victim’s son let me know that his mother being a very religious person and focused on forgiveness, this is what she would have wanted as a sentence, if there is any chance of rehabilitation,” concluded Me Simon Robin, of the Crown.

“Our mom was a wonderful person who dedicated her life to her family, friends and the community. She always had a special thought for sick children. “

– The children of Caroline Zollo-Bracca

“You did not want to cause death, it was not intentional, yet it is nonetheless the result of your decisions, your actions, your mistakes. “

“It appears that the accused is seriously engaged in a rehabilitation process. However, it is unfortunate that to get there it took an irreparable act that cost someone’s life. “

“Caroline Zollo-Braca’s relatives have lost a devoted person, due to a foolish act. “

“It is a very difficult ordeal for the family of the victim. They are extremely shaken. “

“Even if it is not a sentence for adults, it remains an excessively important sentence that we rarely see. “