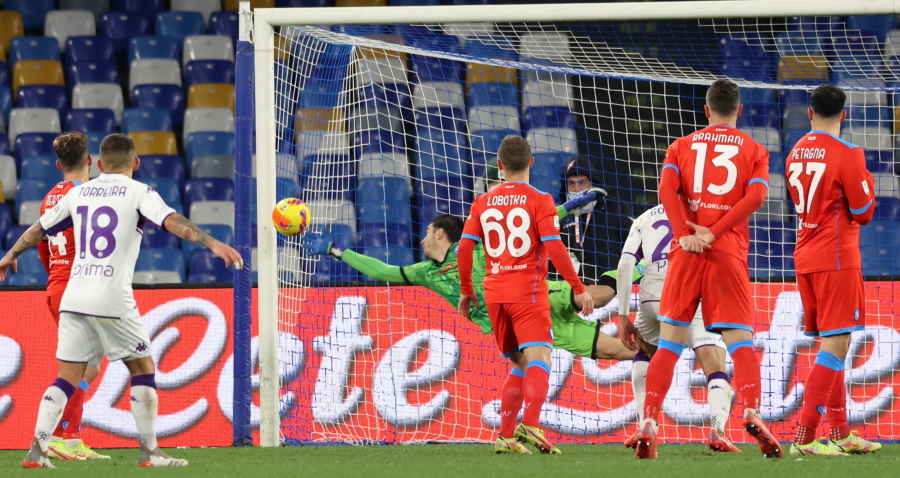 In the eighth final of the Italian Cup, Fiorentina beat Napoli by 5: 2 after an overtime.

The first goal fell in the 41st minute. Fiorentina’s Dusan Vlahovicius attacked the opponent’s goalkeeper with an accurate shot into the lower corner of the goal.

The joy of the guests lasted exactly 3 minutes. 44 minutes into the game, Andrea Petagna was a hair’s breadth away from giving FC the lead with a shot from over on the left. A prompt block by Dreaas Mertens saved the home team that time.

In addition, in the 45 + 2 minute, the goalkeeper of the Fiorentina team Bartlomiejus Dragowskis grossly fouled and saw a red card in front of him.

However, that didn’t stop the guests from breaking out ahead in the second half. 58 minutes into the match, Cristiano Biraghi bent a free kick around the home team’s defensive formation, leaving the keeper with no chance for a save.

The Neapolitan goal of leveling the score was further complicated by Hirving Lozano’s 84th minute. The referee evaluated the player’s actions after reviewing the VAR and showed the Mexican a red card.

In addition, another host player was expelled in the 90 + 5 minutes. Fabian Ruiz was shown a second yellow card and Luciano Spaletti’s pupils remained in nine.

But just minutes away, Napoli dramatically leveled the score. Andrea Petagna knocked home the 0 – 0 goal just outside the reach of the goalkeeper. The score was then 2: 2.

After a short tussle with the defender, Venuti finally tucked the ball home. David Ospina was given a chance to change things around.

Youssef Maleh nailed the last “nail into the Neapolitan coffin”. The Moroccan, who showed great individual mastery, sent the ball into the goal in cold blood and closed the match with the fifth goal of his team.

After this dramatic victory, Vincenzo Italiano’s students tore the road to the Italian Cup quarterfinals.