(CRHoy.com) – The Doctor Melissa granados Zamora, Costa Rican microbiologist, led an investigation that could be of great help to children who have suffered from leukemia.

The specialist, in conjunction with other 6 researchers from the National Children’s Hospital (HNN), managed to identify a genetic alteration that would increase the chances of discharged minor patients to relapse into the disease in the future.

The discovery of Zamora and the other specialists is today one of the main tools used in the medical center for the classification of small patients, in order to do everything possible to prevent that once recovered, the condition returns.

“Patients with the alteration had a very poor prognosis compared to patients who did not have it. Under the current chemotherapy schemes that we have at the National Children’s Hospital, which are very good, we had to offer these patients a different therapeutic alternative to try to reduce this negative prognostic factor and that was the main achievement of the work with Melissa ” Dr. Carlos Santamaría Quesada, head of the Molecular Diagnostic Laboratory of the National Children’s Hospital, who led the experts’ research.

The Journal of Pediatric Hematology Oncoly, specialized in addressing issues related to pediatric medical oncolygia, highlighted the research done by Zamora that was the product of 42 months of continuous work.

“For me, this achievement means being able to give back to the Costa Rican population since my training at the UCR and the dedication that I observe in the workers of the Costa Rican Social Security Fund (CCSS), I feel that as a researcher in the health area it is a privilege to be able to contribute, in some way, to better patient care ”, stated Dr. Granados. 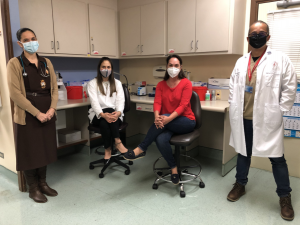 The gene in which the alteration is found is called IKZF1 and was discovered by scientist Charles G. Mullighan in 2009.

Any type of cancer is usually generated precisely by the proliferation of abnormal cells. In the case of acute lymphocytic leukemia, it is precisely because of the B cells.

Healthy B cells are responsible for fighting infections from any pathogen, but if the stem cells that produce them are defective, they can become cancer cells.

The interest of Dr. Zamora and the other researchers was to determine if this gene was present in Costa Rica and if it was, how much did it influence Costa Rican minors diagnosed with B-ALL to relapse with the disease.

“Patients with this type of leukemia have cells that do not mature properly. The cells, instead of evolving into normal B lymphocytes, have markers for other lines that they should not have. In the end, the B lymphocyte is not normal but an aberrant one. This is precisely why this cancer, in particular, is called type B acute lymphocytic leukemia (ALL-B) ”, the specialist added.

Thus, from 2011 to 2018 a study was started in which 155 valid patients were followed up at the National Children’s Hospital treated with a modified protocol called Berlin-Frankfurt-Münster (BFM) and who were diagnosed from 2011 to 2014.

These tests gave way to obtain the final answer that was so much sought after: the alteration is present in the country and, in effect, increases the chances that patients will relapse.

“The research was born as a result of the problems we were facing with our pediatric patients diagnosed with acute B lymphocytic leukemia, whose relapse rate was high. Internationally, these relapses began to decrease and children began to have a better survival thanks to the discovery of new genetic alterations. That is why we decided to take that alteration already reported and see if it was reflected in our population ”, commented Dr. Granados.

According to Dr. Carlos Santamaría, thanks to this research, the HNN formally applies the molecular test to improve the prognostic factor.

“The impact on patients is obvious. We already know that when a patient comes whose clinical conditions is a standard leukemia, who will be treated with standard chemotherapy and this marker comes out, one says to the doctor: this can go wrong; the child may need more intensive chemotherapy ”, indicated Dr. Santamaría.