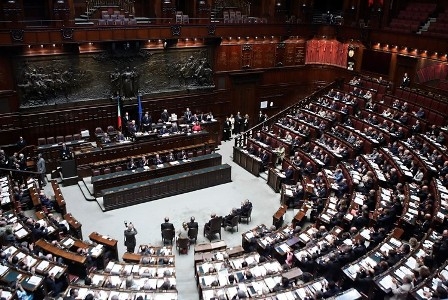 The world of politics follows with interest and also with a certain apprehension the Kkr operation on Tim, that is the takeover bid launched to increase the majority of the capital (at least 51%). The main comments on social networks. The first to tweet last night following the note issued by Tim after the extraordinary board of directors in which the offer was presented was the leader of 5Stelle Giuseppe Conte: “The government should keep its guard on Tim very high, ensuring the best protection of national interests and assets that represent a backbone of the country’s growth, development and technological progress. M5s is also at the forefront for guarantees on employment levels “. And always on the 5Stelle front deputy Angelo Tofalo, former Undersecretary of State for Defense in the Conte I and II governments, asks that “CDP rise to the majority” to then proceed with “the spin-off of the network and the merger with Open Fiber” and give life to “a new ‘service company’ that promotes at least 50% of Italian technology. The management is evaluated on the results, if these do not immediately take a step back “.

According to Antonio Misiani, head of Economy and Finance in the national secretariat of the Democratic Party, “Tim’s future must be followed by the Government with the utmost attention, dealing with Parliament and putting employment and national security at the center. Tlc networks are a strategic asset of the country and a key point of the NRP ”. “The most important thing of all for growth and democracy is that in Italy there is the ambition for a single network under public control. And what the country needs is the security of the infrastructural network and our data ”, he underlines the former minister and former leader of the Pd group in the Chamber, Graziano Delrio.

He also asks for a confrontation in Parliament Forza Italia senator Maurizio Gasparri: “In full compliance with market rules, the fact that Tim has a strategic telecommunications network for the country cannot be overlooked. It is therefore to be hoped that each choice will be evaluated with great attention. Tim’s instability, with multiple ownership changes over the years, has weakened Italy in a strategic sector. The market is the market and must be respected, but fundamental structures for the future of the country, especially in a phase of technological transition accelerated by the dramatic event of the pandemic, require maximum caution. On this issue we will have to confront not only within the government but also in the parliamentary sphere ”.

“Tim, and therefore Italy, need a partner and an industrial plan that enhance and strengthen the company, not a financial operation that risks leading to a stew of such an important reality for the country. Furthermore, given the not so brilliant results of the last few months, the change in leadership hoped for by several parties seems to be a topic that can no longer be postponed “, is the comment of the segretary of the Lega Matteo Salvini.

The Government “should intervene and complete the process for the single network, but there is not only the question of Telecom. I am also thinking of what is happening in Generali, where Mediobanca has been the Trojan horse of the French in Italy for years. Del Vecchio and Caltagirone are waging a courageous battle against bad management in Generali and Mediobanca. The Italian banking system and CDP should help them ”, highlights the Action leader Carlo Calenda.

Stefano Fassina, deputy of Leu, argues that “there is a need for State intervention which, within the framework of a telecommunications strategy, ensures public control of the network, of the single fiber optic network to be completed and then of the clouds for the sensitive data of the administrations. On all this we want the Government to confront Parliament. Open Fiber can be the player, the company that acquires the TIM network infrastructure, including Tim Sparkle, which is decisive for national security. This is the strategy that the government should carry out ”.

“The network – must be publicly owned and the service must be sold in free competition. For this reason, the State with Cassa Depositi e Prestiti should make a choice by leaving TIM and favoring this operation from a position of strength “: he said the leader of the Brothers of Italy Giorgia Meloni. “Telecom is a big topic. In my opinion it is absolutely intolerable that in a country like ours the communication network is in the hands of foreigners, whether they are French or Americans, I don’t give a damn. We brought a motion in Parliament in which it was said that the network must be public, controlled by the state ”.

Giorgetti in an audition at Copasir

He decided not to comment on the offer of Kkr the Copasir: “The Parliamentary Committee on the Security of the Republic will make its assessments on Tim and then if it wants it will express itself”, he limited himself to saying the president Adolfo Urso on the sidelines of an event. Meanwhile it is the hearing of the Minister of Economic Development, Giancarlo Giorgetti, has been set for Thursday 25 November at 11.30 in the Commission as part of a cycle of hearings on the development expectations of the common European defense. Occasion in which it is not excluded that we take stock of Kkr’s offer.

Telco for Italy: how to accelerate the transformation. The opportunities of PNRR and the Cloud

The tlc trade unions initiate the legal procedures “for the proclamation of a state of agitation and strike initiatives in support of the dispute in question in all the Italian companies of the Tim Group “. So in a letter signed by Slc Cgil Fistel Cisl and Uilcom Uil sent to the company executives Luciano Sale, Human Resources, Organization & Real Estate and Giovanni Pipita Trade Union Relations. The reasons for the cooling procedures indicate: corporate uncertainties and possible yet another change of ownership. Defense of occupational perimeters and Business relaunch business plan.

The National Secretariats of Slc Cgil, Fistel Cisl and Uilcom Uil highlight that “the network and the Tlc sector are central to bringing the country to grasp the important and challenging objectives relating to digitization and innovation, those indicated in the Pnrr, to be informed that a working group is responsible for following a strategic story for the A country on which the spotlight has been focused for decades has greatly embittered us. Not having summoned us and not being listened to by the government institutions involved, in a context that is rapidly evolving, is not a disgrace to the confederal trade unions but to tens of thousands of workers employed in the Tim group and in the Tlc sector, citizens of the Italy. The defense of current employment levels and their development cannot pass from waiting for what the market or a working group will do, politics in its highest representation or the Ministers and the Prime Minister take an urgent and clear position that preserves the country’s infrastructures and those employed in the sector “.

“We cannot repeat the mistakes of the past when Telecom was allowed to privatize, dispersing a competence that today needs to be relaunched and strengthened”, he said. the general secretary of the CGIL, Maurizio Landini, on the sidelines of the Iren workers’ assembly in Turin. “We still don’t have a new generation network that is able to connect our country. Therefore, what must be realized and also analyzed with respect to the proposal put forward by the American fund is which system we want to build on telecommunications. Being a strategic sector, we think that the government should not let the market do it, but should be able to set guidelines and conditions capable of building the single network throughout the country “. According to Paolo Capone, General Secretary of the Ugl the Government must evaluate the use of the Golden power. “The country’s interests, including the protection of sensitive data, come before the logic of the market. We ask for a discussion to discuss an industrial plan that accelerates the creation of a single network, which is essential for connecting the territory and promoting the digitization process. In this sense, infrastructure investments are needed to relaunch the telecommunications sector, safeguard employment levels and guarantee the development and modernization of the country “.