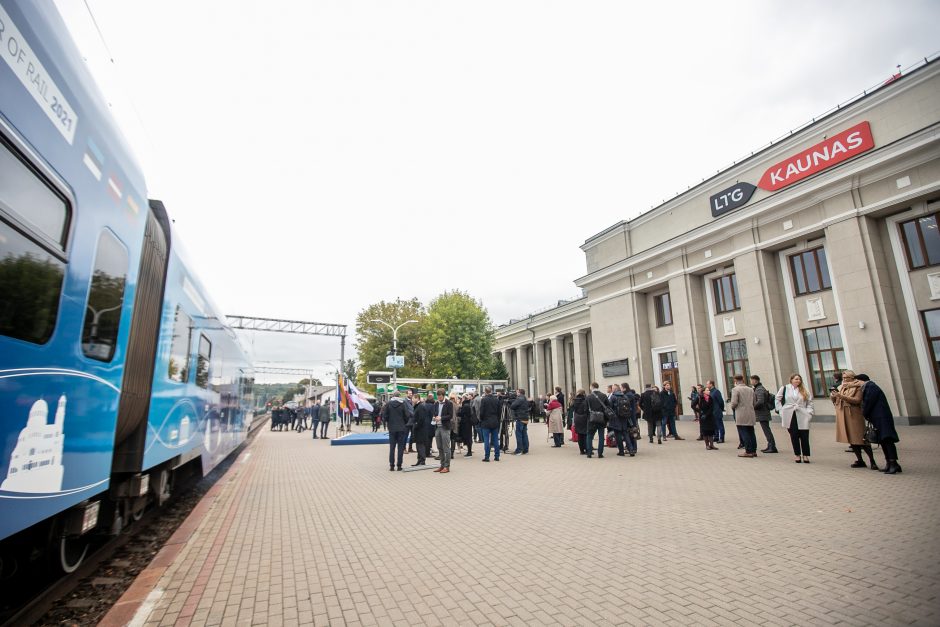 Five years after the construction of the European-gauge Rail Baltica railway connecting Helsinki with Warsaw, it will be possible to travel from Vilnius to Tallinn in four hours, the project developers promise.

“I am very confident that (…) after the construction of Rail Baltica, we will be able to reach Tallinn from Vilnius in less than four hours,” Deputy Minister of Transport Loreta Maskaliovienė told reporters in Kaunas on Wednesday.

Trains from Lisbon and Tallinn met at Kaunas railway station on Wednesday in order to mark the integration of European and Baltic railways with the construction of Rail Baltica.

The European Commission’s special train “Connecting Europe Express” arrived in Kaunas from Lisbon via Warsaw. The Baltic Express ran from Tallinn via Riga and Vilnius for more than 10 hours.

According to the Deputy Minister, Lithuania’s ambition remains to implement Rail Baltica in 2026, and to connect the line in Poland in 2027. It is planned to start regular flights from Warsaw to Vilnius next year.

“We did not drive from Vilnius to Kaunas for a short time – one hour. Yesterday was a more interesting day when we had a historical event – to reach from Tallinn via Riga to Vilnius in more than ten hours, ”she said.

Mantas Bartuška, CEO of Lietuvos Geležinkeliai, said that he saw high public expectations for a common Baltic train, which encouraged looking for solutions to run it before Rail Baltica was completed, but did not specify the exact dates.

“The three countries just have to agree,” he said.

According to M. Bartuška, it is easier to agree on a train to Poland, because it has been running before, so it is realistic to agree on it next year. The journey from Vilnius to Warsaw with a transfer in Kaunas would take about eight hours.

The project is getting more expensive

The European Court of Auditors said last June that the construction cost of Rail Baltica had risen by almost 2.4 billion. up to EUR 7 billion and may increase in the future. In addition, they questioned the cost-effectiveness of the project and its timely implementation.

The officially announced cost of the project is still $ 5.8 billion. euros.

According to L. Maskaliovienė, the value of the project is being recalculated, she did not name the new possible amount, but stressed that the longer the delay, the more the price will rise.

“Therefore, our goal is to agree on priorities for the three Baltic countries, and Lithuania’s priority is to build a line and connect our countries as soon as possible,” she said.

According to her, Latvia and Estonia take a similar approach.

Rail Baltica will integrate the Baltic States into the European railway network. In Lithuania, Latvia and Estonia, 870 kilometers of high-speed electrified railway will be built, with trains running at speeds of up to 249 km per hour. The project is planned to be completed by the end of 2026.