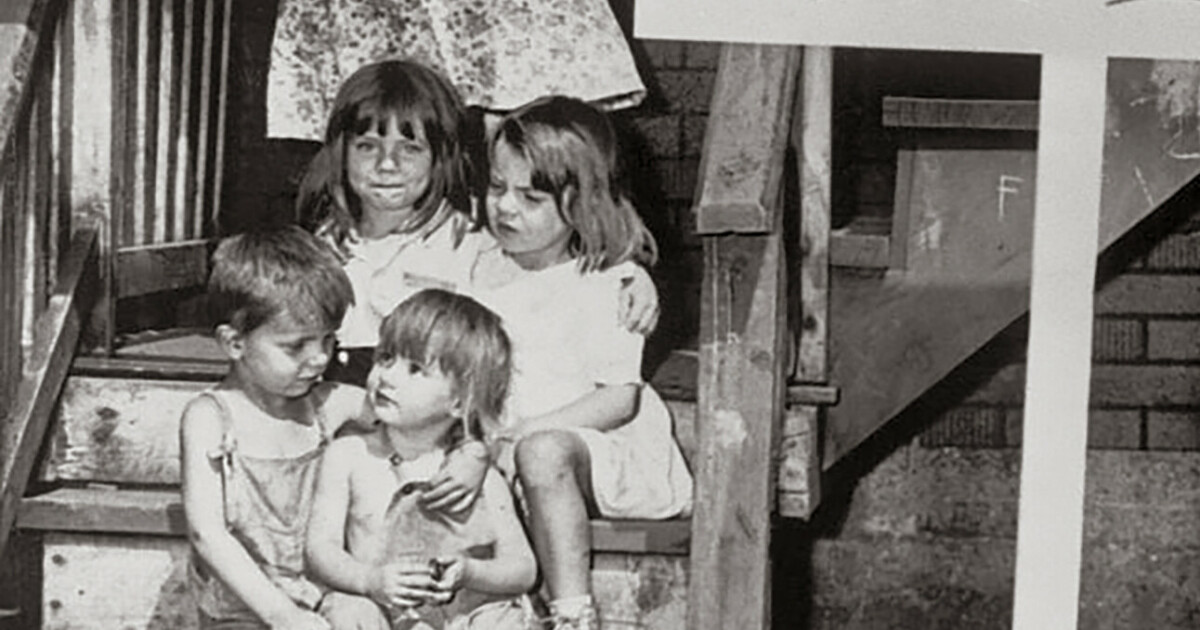 «RaeAnn Mills pushes the brush into a bottle of nail polish that has the same color as a Barbie box. She takes her sister’s hand and puts a thin layer of “Pink forever” on each nail. Mills is 70 years old, sister Sue Ellen Chalifoux is 67. This is the first time they paint each other’s nails ».

This is how the report starts in The Times Of Northwest Indiana about the lives of the children in the picture above.

The picture was first published on August 5, 1948 in The Vidette-Messenger, which was published in Valparaiso, Indiana, USA.

It had the following text:

A large “for sale” sign in Chicago silently tells the tragic story of the parents, who are soon thrown out of the apartment. The unemployed driver and his wife see no other way than to sell the four children. Mora turns her head away from the camera, while the kids look around wondering. At the top of the stairs are Lana (6) and Rae (5). Below are Milton (4) and Sue Ellen (2). »

The one who is not in the picture is the youngest son David. He is not born yet. He was sold when he was nine months old.

It is unclear how long the sign stood there. Some family members say the picture was arranged and that the mother got paid for it. It shows the reality anyway. Within two years, all the children were sold.

Rae and Milton were sold to a family from DeMotte, who changed their names to Beverly and Kenneth. They were never formally adopted by the new family. Rae says it costs two dollars.

– They used to tie us to the barn. When I was 17, I left home and never looked back.

Milton says there is a lot from childhood he can not remember. He was abused and had to work long days in the field.

– I asked why my foster father beat me. He said he had to keep an eye on me – and that if I was scared, I would listen to him.

Rae visited the biological mother a few years later. It was not a pleasant reunion. She says that her mother neither regretted nor showed love.

Sue Ellen had a better upbringing. She was raised not far from her childhood home and attended St. Francis de Sales High School. When The Times of Northwest Indiana met her in June 2013, she was too ill to speak.

She was asked what thoughts she had about her biological mother and wrote these words on a piece of paper:

– She should burn in hell.

Lana’s story is little known. But the youngest brother David met her daughter in Washington in 2013.

– She said that all Lana talked about was that she wanted to find her siblings before she died.

Lana never got her wish fulfilled. She died of cancer in 1998.

David was just nine months old when he was adopted by a couple in Wheatfield, not far from where RaeAnn and Milton lived. This allowed him to visit his siblings as he got older.

– They were often tied to the barn. They were abused.

David says that he himself had a nice childhood with the adoptive family and has good memories from growing up. As an adult, he moved back to the area where he grew up.

He is the only one who expresses a kind of sympathy with his biological mother.

– She remarried and had four daughters. She kept them. She did not keep us. But at that time it was about survival. Shall we judge her? We are all human. We make mistakes.