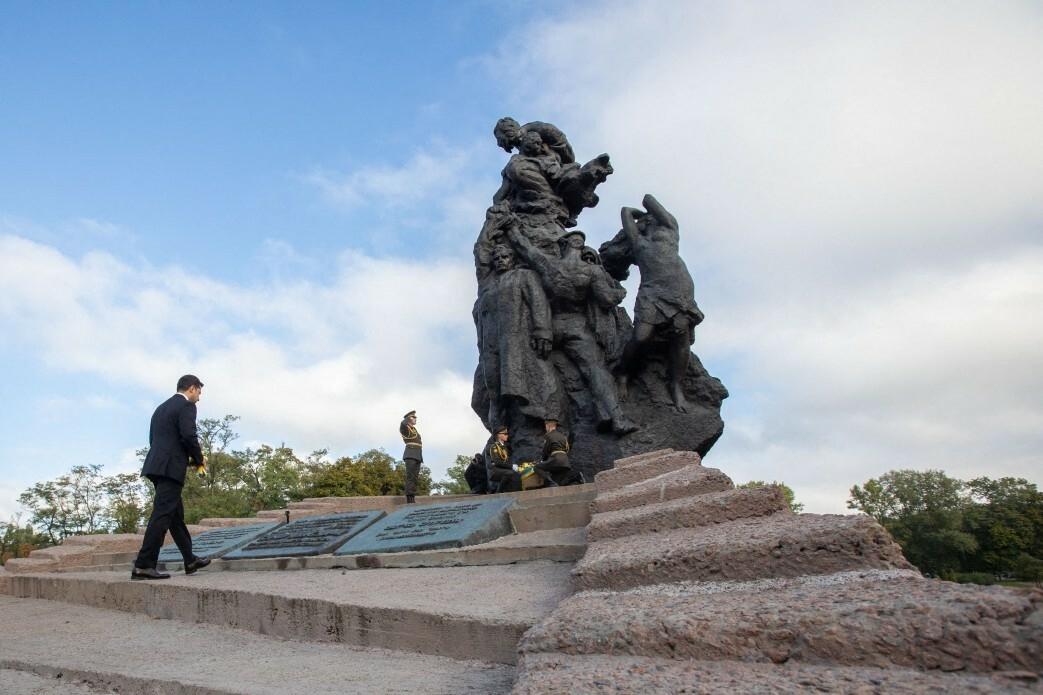 Ukrainian President Volodymyr Zelensky laid flowers at a memorial to the victims of the massacre. “Grandma Jar. Two short words sound like two shots, but for several generations they carry long and terrible memories. Because the shots in Babí Jar were unfortunately not two, but there were a hundred times, a thousand times, tens of thousands of times more, “said Zelensky.

In all Ukrainian schools, a lesson dedicated to the 80th anniversary of the tragedy was on Wednesday.

Zelensky reminded that in the following years of the occupation, according to various estimates, the Nazis eventually murdered between 100,000 and 200,000 people in the gorge, including Jews, Roma, prisoners of war and patients from psychiatric hospitals.

Ukraine began building a memorial on site and a museum, which it plans to open at the turn of 2025 and 2026, the AP added.

The systematic extermination of European Jews began in June 1941 after the Nazi invasion of the Soviet Union. For this purpose, the Germans set up killer units Einsatzgruppen, which murdered mainly Jews, political commissars, communists and other unwanted people. In total, Einsatzgruppen units, with the help of local militias, murdered about 1.2 million Jews and hundreds of thousands of other Soviet citizens, the CTK agency reminded.

The memento of this chapter of the Holocaust was the massacre in the Babí Jar gorge on the outskirts of Kiev, where 80 years ago, in just two days on September 29 and 30, 1941, the Nazis shot 33,771 Kiev Jews.

Decree as the beginning of the end

In the following years of occupation in this gorge, according to some estimates, up to 200,000 people ended their lives. Similar massacres took place in other parts of the former Soviet Union, but the massacre in Babí Jar was exceptional in its size, speed and brutality.

Around 150,000 Jews lived in Kiev at that time, some were saved by evacuation to the east or joining the Red Army, a small fraction of Jews were hidden by Ukrainian neighbors. Ten days after the arrival of the Nazis, an ordinance appeared throughout the city in Russian, Ukrainian and German: ). They will take their documents, money and valuables with them, as well as warm clothes and underwear. Anyone who does not obey this command and is caught elsewhere will be shot. Whoever enters the empty Jewish apartments with the intention of stealing will be shot, “the official decree wrote.

Some believed the rumor that it was only a call for deportation, and they were not even stopped by the offensive address of “Jews” (translated – Jews) instead of the neutral “Yevreja”.

The site of the horrific event was 150 meters long, 30 meters wide and about 15 meters deep “Babí rokle”, which was located near the Orthodox and Jewish cemetery. In addition to Einsatzgruppen units, police battalions and Ukrainian militias took part in the event.

People who came to the place were asked to undress and hand in valuables. Then, during the constant beating, they were chased to the edge of the gorge, where they were shot. Their limp bodies fell straight into the gorge. Others were forced to lie on their bodies, and the Nazis shot them in the back of their heads one by one. According to German records, 33,771 people were shot dead in the gorge on 29 and 30 September.

See also  Another indictment of Kočner and Zsuzsová from the Kuciak case, they were supposed to murder in the judiciary

Only a few people managed to survive the massacre. “People turned gray in a few seconds, their mothers lost their minds when the Nazis snatched the babies from their arms and threw them by the sand embankment. Naked people lined up in groups of two or three and led them behind a dike of sand. People did not return from there, “described the horror of Kiev actress Dina Pronicheva, one of the few eyewitnesses to the massacre that managed to survive.

A plane kept circling the whole area for both days to drown out the noise of the engines, and most of the people of Kiev initially thought that the Jews had been deported. A small number of murderers allegedly faced psychological problems mainly due to the killing of women, the elderly and children. However, part of the command rather criticized the unnecessary loss of ammunition during this type of execution, and these considerations eventually led to the creation of gas chambers, CTK mentioned.

Executions continued in Babí Jar even after that. Apart from the Jews, the victims were mainly Soviet soldiers, Roma, patients in psychiatric hospitals and Ukrainians. Not far from Babí Jar, in the Syrec district of Kiev, a death camp was set up, the survivors of which after the war claimed that the Nazis had burned 150 to 180,000 bodies excavated from the gorge when they tried to eradicate their crime when they left Kiev in 1943.