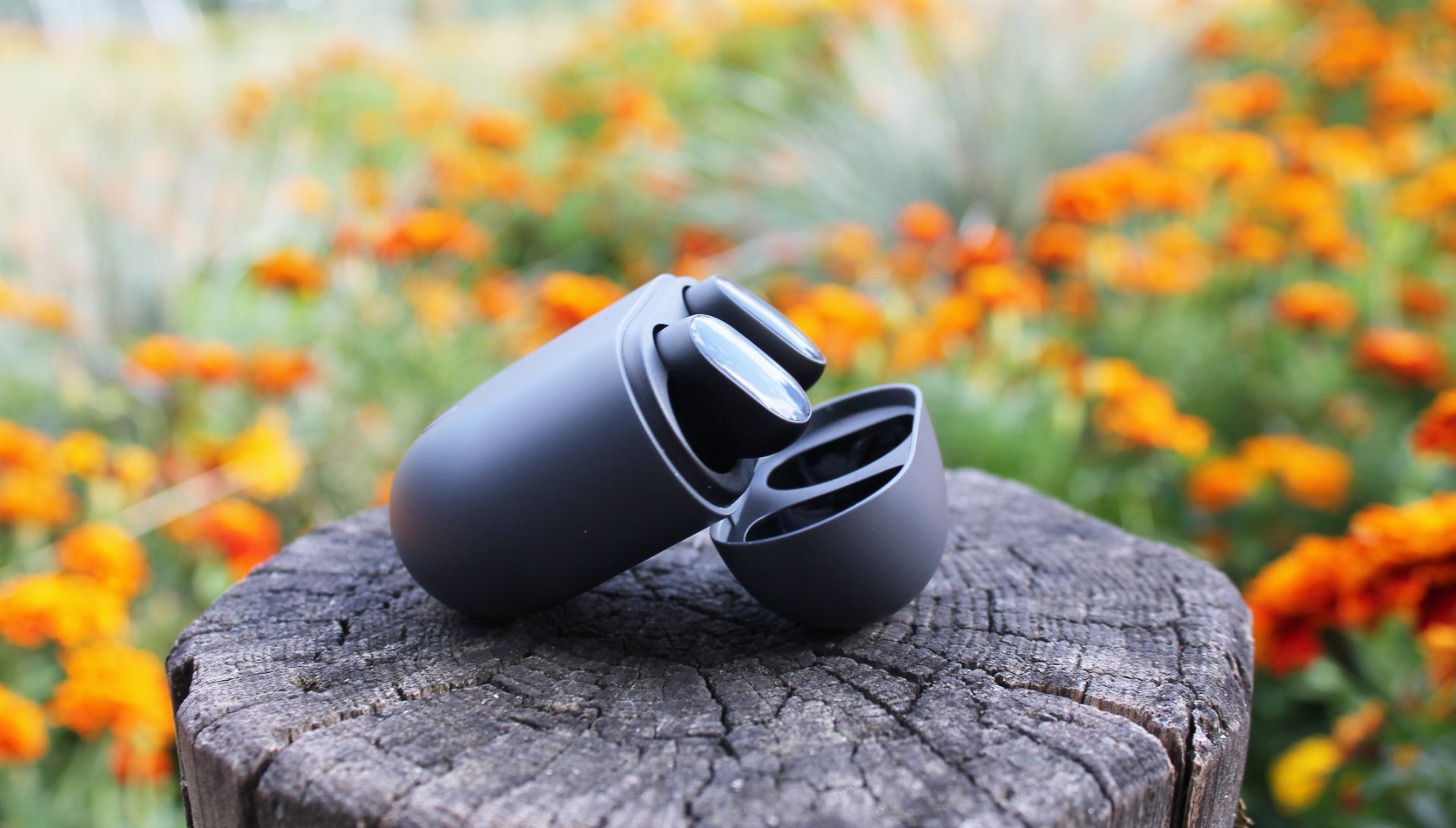 Xiaomi Redmi Buds 3 Pro are wireless headphones that offer ANC, wireless charging, touch control and features such as headphone detection or simultaneous connection to two devices at the same time. That wouldn’t be unusual yet. But when I mention the price of CZK 1,590, it starts to get much more interesting.

Headphones with similar functions and parameters often cost the competition around CZK 3,000 and above. So Redmi Buds 3 is definitely arousing interest on paper, and I can tell you at the outset that the price-performance ratio is not bad at all here.

Appearance and contents of the package

Although this is probably not a major advantage for most users, I can’t forgive myself for praising the look of the packaging, which is already very close to Apple, and the device for less than two thousand adds a touch of exclusivity. The content is not significantly surprising. There are headphones with a box, a short charging cable and three interchangeable plugs of different sizes. There are also paper manuals.

The shape of the box is also not surprising. However, the rounded pebble in a matt gray design with a small gray Redmi logo on the back is nice to me with its inconspicuousness and elegance. On the front of the box we find a single button and a small diode. From the bottom you can see the USB-C connector for charging, although Redmi Buds 3 Pro can also Qi.

After opening the box, slightly non-traditional headphones look out of shape. However, during development, someone thought that the headphones would hold well in the fingers when put on, and that also worked. The touch surfaces of the headphones are slightly shiny but also gray, which looks decent again.

During the first attempts, I always put the headphones in the box upside down, which is surprisingly possible, but you won’t close the box again. So over time, it will make you get used to the right way. Gray and black variants are available. I tested the black one, although from my point of view it’s more gray. On the contrary, the official gray seems more like white to me, but you can probably judge it better from the photo below.

As I mentioned in the introduction, Redmi Buds 3 Pro offer a fairly wide range of features given the price at which they can be purchased. They do not lack ANC, which can switch between modes according to the nature of the noise that surrounds you. Alternatively, manual settings are possible via telephone or touch control.

I was very pleased with the presence of wireless charging, but also the detection of removing headphones from the ears or the possibility of connecting between two devices at the same time. There is a lack of basic water resistance class IPX4 and Bluetooth in version 5.2. Codec support includes SBC and AAC.

With the Buds 3 Pro, Redmi boasts a lightning-fast connection to the phone via a pop-up window that appears when you have Bluetooth turned on on your phone and open a headset box near it. Unfortunately, this only applies to smartphones under the Xiaomi brand. At the time of testing, I only had an iPhone on hand, so unfortunately I did not try this premium experience.

Although I didn’t have the opportunity to adjust the headphones in more depth in the phone environment, the pairing went smoothly, whether we’re talking about an iPhone or a MacBook. But then I was only dependent on touch control, which is definitely a shame. So we can only hope that a separate application will appear in the future, because this is a big minus for all users of smartphones of other brands.

In addition to the functions already mentioned in the form of quick switching between two devices or touch controls, I must also mention the possibility of using only one handset, which is useful in many situations. Switching between devices works with lightning speed, just start playback on one of the devices and the headphones will jump to the other device in a second. I used this function mainly for simultaneous connection to iPhone SE and MacBook Pro.

Also, touch control works relatively reliably, although it does not offer too many options. You can answer, reject or end the call during a call. When listening to music, you can pause playback, resume, and skip to the next song.

Therefore, you cannot adjust the volume or move back. Hold your finger on the handset to switch between ANC and transparent mode. Also, the detection of pulling the headphones out of the ear works great.

The headphones fell great in my ears. I never missed the ear during testing and I wouldn’t be afraid to recommend them for less dynamic sports, such as cycling or yoga. I had the headphones in my ears for about three hours at a time and I didn’t feel any unpleasant pressures or the need to take the headphones out for a while. Thanks to their shape, handling is very simple.

When it comes to the music experience, Buds 3 Pro are not bad at all. Thanks to the 9mm dynamic converter, the bass components of the sound spectrum are also present and the sound is very good in the given price category. For example, when I’m at the news Head On from Jose Gonzálese compared the Buds 3 Pro with the more expensive competition Huawei FreeBuds 4, both models were able to reproduce all the details quite comparably across the spectrum of this acoustic music.

Buds 3 Pro are a bit weaker in terms of volume, which you will know especially with more energetic ones Foo Fighters and songs Bridge Burning, where the differences are bigger and above all I would point out the greater flatness of the Buds 3 Pro compared to the louder and at the same time more dynamic FreeBuds 4. However, it should be mentioned that these are headphones at almost twice the price of the Redmi Buds 3 Pro.

Overall, I would rate the sound quality of the tested model positively. We can’t expect the qualities of many times more expensive models with headphones in this price category, however, for ordinary listening, for example, on the way to work, sound is enough.

A big plus for Buds 3 Pro is also the presence of ANC and transparent mode. From my experience, I have to admit that ANC works quite well. For example, in the car, it reliably filters out unwanted engine noise and creates peace of mind at work or listening to podcasts. What upset me a little was the automatic switching between modes and the ANC’s effort to adapt to each type of ambient noise. So I take this more as a disruptive element, and I would actually welcome it if the transition was more gradual or not at all.

As for the transparent mode, the amplification of the surrounding sounds is not uniform and some noises are amplified unnaturally stronger than the others, but you can probably get used to it. Otherwise, the transparent mode is another functional accessory in the Redmi Buds 3 Pro equipment.

As I mentioned, the overall earpiece volume could be higher, which you would also appreciate for phone calls. I did not notice any problems with intelligibility in a quiet environment, on the contrary, in noisier areas it is necessary to speak more loudly. In the field of telephony, we would certainly find better candidates on the market, but I still successfully completed several longer telephone calls with the headset.

Each handset has a battery with a capacity of 35 mAh, the box then hides another 470 mAh. The manufacturer states the endurance of 6 hours when listening to music with ANC off, volume at 50% and AAC codec. When telephoning and with the same parameters, it states some 3 hours. This roughly corresponds to reality, but when the ANC is turned on, you have to expect worse endurance. I usually got for about 4 hours, but I often used ANC and the volume was definitely much higher than 50%.

Fortunately, a box is always at hand, which will add up to 28 hours of further listening. Due to the price of the product, endurance is sufficient. Pleasant bonuses are fast charging, which ensures 3 hours of listening in just 10 minutes on the charger and one of the main advantages – wireless Qi charging. Thanks to that, I would easily forgive the headphones for worse endurance when the ANC is turned on and the volume is higher.

For users of the Xiaomi smartphone, who prefer a good price-performance ratio and thus do not care about the top sound quality, the Buds 3 Pro headphones are ideal. For the price of CZK 1,590, it brings many useful functions in the form of ANC, wireless charging or fast switching between two devices. At the same time, they look elegant and give the impression of solid workmanship.

However, as a user of the iPhone or other brands of phones, I would hesitate a little more than buying. The missing application is a major shortcoming for many users, and if I don’t want to save, in the price category of around CZK 3,000 you can find headphones with better sound for listening to music and making phone calls.

Otherwise, I was pleasantly surprised by the Redmi Buds 3 Pro headphones. In this price category, it is a very nice product with an interesting mix of functions and, apart from the missing application, they actually have no major drawbacks.