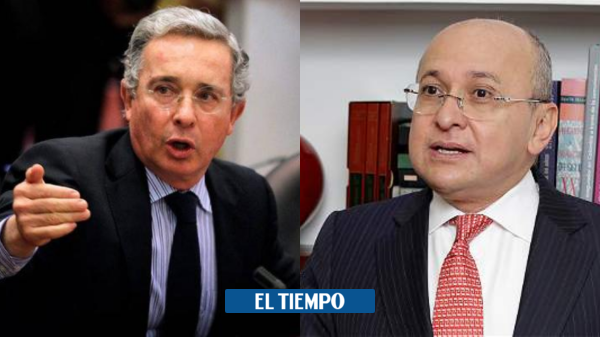 Former Attorney General Eduardo Montealegre and former Deputy Attorney General Jorge Perdomo announced in a statement that they will ask to be recognized as victims in the process that the Prosecutor’s Office is now leading against former President and former Senator Álvaro Uribe Vélez for alleged bribery of witnesses and procedural fraud.

Montealegre and Perdomo affirmed that, as victims, they will attend the hearings of the case and will oppose the release of Uribe, who since the beginning of August has been at home in jail by order of the Supreme Court, which previously carried out the process.

(Also read: The Prosecutor’s reasons for not leaving the Uribe case)

The lawyers said that they are victims of “the plot created by Uribe Vélez, consisting of putting together absolutely false facts – presumably criminal – in order to get involved in illegal activities that we have never carried out. And they said that the former president fabricated lies and exposed them to the Supreme Court and the Prosecutor’s Office.

They added that they oppose the freedom of Uribe, something that their defense demands, because they consider that it constitutes a danger to society and may obstruct the investigation.

(You may be interested: Prosecutor investigating Uribe does not declare himself impeded in the case)

“The evidence is easy: look at the patterns of behavior that he has shown throughout his ‘dark’ political career: family ties to drug trafficking and paramilitarism; intervention in war crimes and crimes against humanity; permanent campaigns to delegitimize the Justice; propaganda and inflammatory speeches against social leaders, human rights defenders and murdered humble people, who, among others, ” pointed out.

Likewise, the former prosecutors asked the Prosecutor’s Office to impute charges to the former prosecutor of Justice and Peace Hilda Niño Farfán, who, they say, “served as an instrument for the commission of the crimes of procedural fraud committed by Álvaro Uribe and his defense.” They will also request an indictment for the drug trafficker Juan Carlos ‘el Tuso’ Sierra.

(Also: Freedom of former senator Álvaro Uribe must be decided by a judge

Montealegre and Perdomo indicated that Uribe presented Niño and Sierra as false witnesses before the Supreme Court of Justice. The first, they pointed out, “affirmed that, during our administration, a ‘criminal association’ was formed to seek evidence against the horseman Santiago Uribe (brother of former President Uribe), who was investigated for being a member of the paramilitary group the twelve apostles.”

While they said that Sierra said that the former prosecutors sent a journalist to offer him money to testify against the Uribe. The Supreme Court distorted both testimonies.

Other Justice news that may interest you:

-‘Timochenko ‘, before the JEP for forced recruitment of minors

-There are currently 2,221 prisoners infected by covid-19