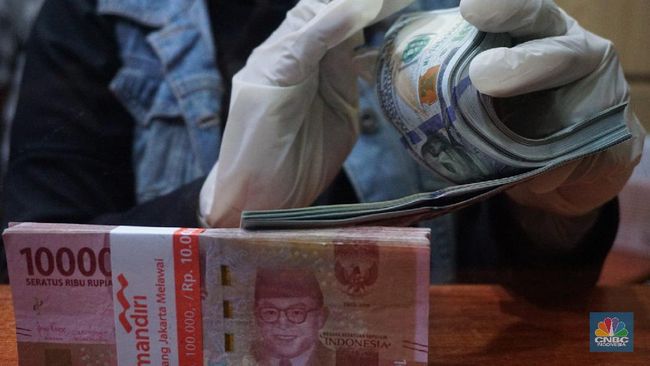 Jakarta, CNBC Indonesia – Issue tapering affecting global financial markets since last week, the United States (US) dollar has benefited the most. However, this week, the US dollar was under pressure, as market players began to hesitate in tapering or reducing the value of the asset purchase program (quantitative easing/QE) by the US central bank (The Fed) will be conducted in.

Throughout last week, the US dollar index rose more than 1% after the release of the minutes of the July issue of the Fed’s monetary policy meeting which showed an opportunity tapering this year.

Inflation in the US which is said to have reached its target and the recovery in the labor market is also almost as expected, making the majority of board members vote tapering this year.

“Looking ahead, most participants (Federal Open Market Committee/FOMC) noted that as long as the broad economic recovery matches their expectations, it would be appropriate to undertake a reduction in the value of asset purchases this year,” the minutes read.

But in the first 2 days of this week, the US dollar index actually turned down 0.64%. The reason, the President of the Dallas area Fed, Robert Kaplan, last Friday said he would reconsider tapering in the near future if the spread of the corona virus disrupts the US economic recovery.

Kaplan is one of the members of the Fed who hawkish or pro monetary tightening. So that his comments have a significant impact on expectations tapering.

Prior to the release of the Fed’s minutes, market participants were also not sure that the Fed would do this tapering this year. This can be seen from the decline in the speculative position of the US dollar contract. Based on data from the Commodity Futures Trading Commission (CFTC), in the week ending August 17, net long positions (net long) the US dollar was recorded at US$ 1.06 billion, down more than 65% from the previous week’s US$ 3.08 billion.

Net long This represents the position of the US dollar against 6 major currencies, namely the euro, pound sterling, yen, franc, Canadian dollar and Australian dollar.

The Jackson Hole meeting in the United States, which will be held on Friday, has caught the attention of market participants as the Fed chairman, Jerome Powell, is expected to provide details on when and how it will be conducted.

“We think investors will be waiting to hear tapering from Jerome Powell on Friday, before re-entering risk assets again, and selling the US dollar,” strategists from ING wrote in a note to clients quoted CNBC International, Tuesday (24/8/2021).

Meanwhile analysts from the National Australia Bank see a surge in COVID-19 cases in the US making the Fed wait for economic data for the next two months before announcing tapering.

“Jackson Hole is key, but given the uncertainty (due to Covid-19) the Fed will likely look at next 2 months of employment data, but announcement tapering remain in this year,” said Tapas Strickland, analyst at National Australia Bank Reuters.

Meanwhile economists from Goldman Sachs expect the new Fed to announce tapering in November, with a probability of 45%. Besides, the magnitude tapering estimated at US$ 15 billion, out of the current total QE value of US$ 120 billion.