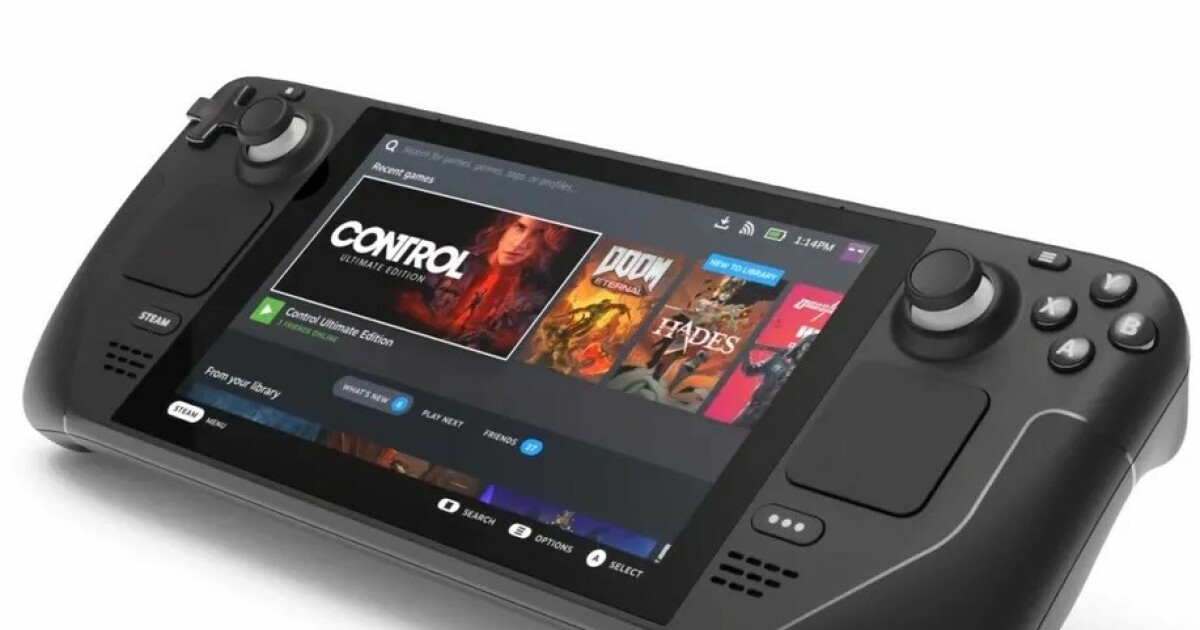 Steam Deck has several design similarities with the aforementioned Nintendo Switch and consists of a 7-inch large screen with controllers on each side. On the front, it has two sticks, two track surfaces and four buttons in an ABXY setup, as well as a d-pad. On the upper side you will find two triggers and two shoulder buttons, while on the underside there are four more buttons.

In addition, Steam Deck has a built-in gyroscope for motion control, so in other words there are plenty of control options.

The non-OLED screen has a resolution of 1200 x 800 pixels and the games run at 720p. You can dock it to a TV or monitor via the USB-C port which can also be used for ethernet and data transfer, as well as charging.

Steam Deck also has Bluetooth so you can use wireless headphones, but also connect a game controller from for example PlayStation or Xbox, if you prefer.

Up to 8 hours battery life

Like PlayStation 5 and Xbox Series X | S, Steam Deck is built on AMD’s chipset and consists of a quad-core Zen 2 processor and RDNA 2 graphics card.

Inside is 16 GB LPDDR5 memory and, depending on the model choice, 64 GB eMMC, 256 GB NVMe or 512 GB high-speed NMVe storage. Is not the enough, you can expand further thanks to the Steam Decks microSD card slot.

The battery is 40 watt hours, and what battery life applies Valve tells IGN, which has a sneak peek at Steam Deck, that you can play «Portal 2» for several hours.

In less resource-intensive games or surfing the web, you can expect around 7-8 hours, according to Valve.

Linux at the bottom, but you can install Windows

Steam Deck runs SteamOS built on Linux, which according to The Verge can run less than 15 percent of the games available on Steam. Of the 54,280 games on Steam, Linux supports 7586 of them.

If you want access to all the games Steam has to offer, minus 13 titles, you can actually install Windows on Steam Deck, as the console is an open platform. If you pair it with an Xbox Game Pass subscription, you’ll probably be as close to a handheld Xbox as you’ll ever be ….

Steam Deck launches in December and if you live in Canada, USA, EU or UK, you can pre-order it now. However, Valve has introduced some restrictions to prevent “scalpers” problems – with some buying heaps of consoles and reselling them at a huge profit – at the PlayStation 5 launch.

Only Steam accounts that have made a purchase on the platform for June this year, can pre-order Steam Deck. You must also pay a refundable reservation fee of $ 5.

The prices on Steam Deck are as follows: