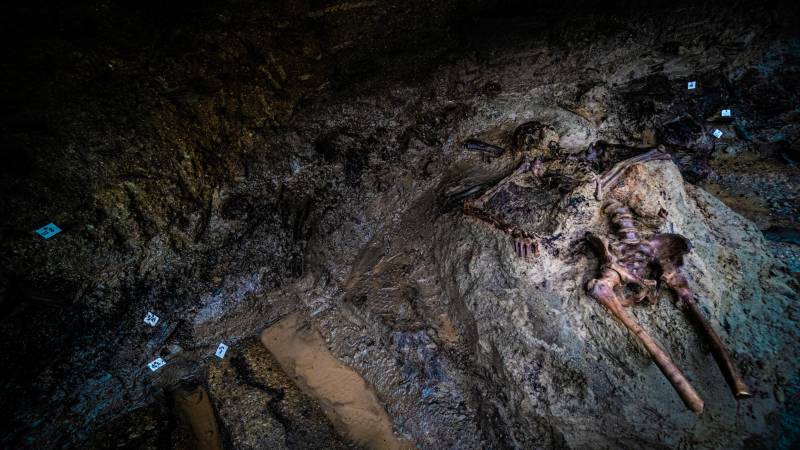 The violence with which the Roman coastal city of Herculaneum was wiped out in the eruption of Mount Vesuvius in AD 79 is comparable to what the atomic bomb dropped on Hiroshima in 1945 did. So said Italian archaeologist Domenico Camardo when presenting the remains of a victim of the volcanic eruption.

The pyroclastic flow that rolled off the volcano at hundreds of kilometers per hour after the eruption – consisting of gas, lava and ash – had a temperature of about 400 to 500 degrees Celsius in Herculaneum, according to scientists. At those kinds of temperatures, brains and blood boil immediately. “It really gives a sense of the horror and tragedy that happened here,” Camardo told the British newspaper The Guardian.

He cited the discovery of the remains of a man about 40 years old as an example of the abrupt ending of lives. He was found a few meters from the sea. He may have been on the run. He was carrying a leather purse containing valuables. His clothes had been scorched. His bones were badly damaged, caused by the volcanic violence.

Digging in Herculaneum is more difficult than, for example, in nearby Pompeii, which was destroyed in the same eruption. For example, a new place has been built on top of Herculaneum; the Roman city was discovered by accident in the eighteenth century when digging a well. Furthermore, the city is buried under an almost twenty meters thick, petrified layer of mud.

According to archaeologist Camardo, there is still plenty to be found. He explains that Herculaneum was affected in a different way by the eruption than Pompeii. “Pompeii was destroyed by a three-meter layer of ash and volcanic rocks. Herculaneum was first hit by the pyroclastic flow, which ended all life. Then at least six volcanic mud waves came over the city like tidal waves.”

The thick layer of mud made it almost impossible for oxygen to come through, which means that organic material, among other things, has also been preserved. “We find food in Herculaneum, for example. We’ve never found that in Pompeii,” says Camardo.