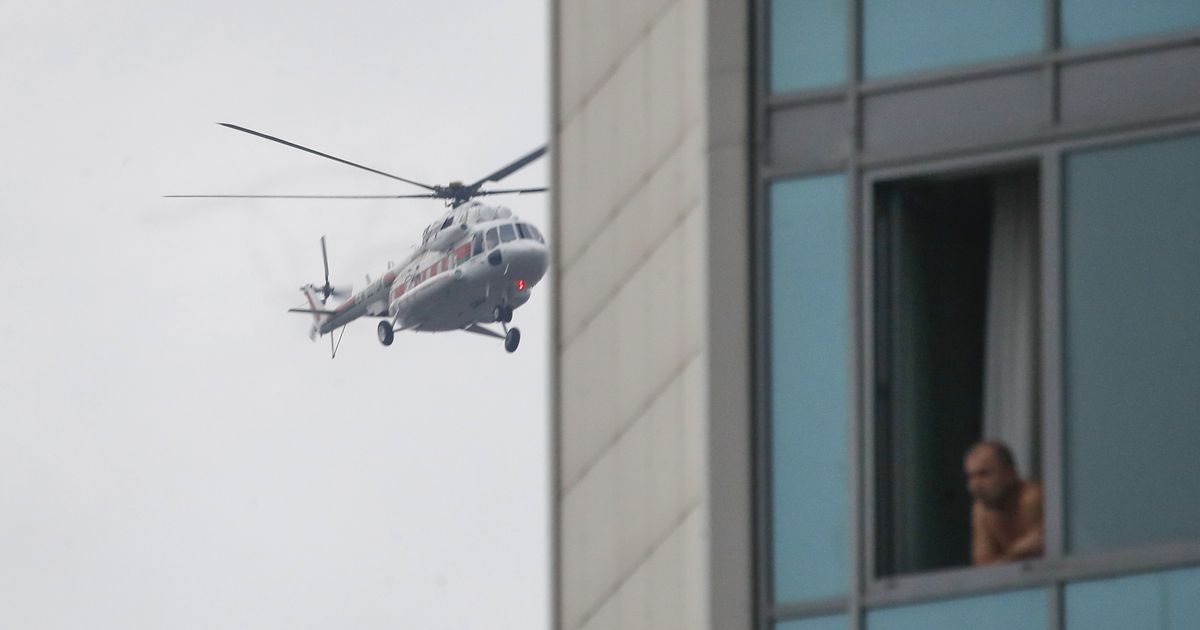 One of them shows Lukashenko in a body armor sitting on a plane, looking out the window and urging a pilot to fly closer to the prospectus to see demonstrators who had already begun to disperse.

In one of the video excerpts, he says of the outgoing crowd, “Scattered like a rat.”

In the helicopter with him is a young guy in a battle suit and with a helmet on his head. As the press service of the dictatorship later confirmed, Lukashenko spent the whole day in his course and activities Nikolai, the dictator’s 15-year-old son.

Another video of Lukashenka in a bulletproof vest appeared – this time from a helicopter.

He flies over Minsk, looks out the window and asks the pilot to fly closer to the avenue. pic.twitter.com/r7wWLNNKBz

The dictator got out of the helicopter with a gun in his hand and went to his residence. Apparently, his intention was not to meet with the protesters, because before going out on the street he asked, “There’s no one there anymore, if?”

Lukashenka flew to the Palace of Independence, next to which a numerous protest action is taking place. He is wearing a bulletproof vest, he has a gun in his hands

After that, Lukashenko arrived at the soldiers with a gun in his hands, who greeted him with applause and the words: “We are with you to the end!” Lukashenko repeatedly thanked the militants, called them beauties, praised and repeated: “We are with them [cilvēkiem] let’s deal! “

See also  Krovinovic left and could earn 2 million to Benfica: all the details of the deal - Benfica

Top journalists have noticed that the dictator was holding an AKS-74U rifle in his hand, which was not loaded when he got off the helicopter. When he went to meet the militants, the weapon had already been loaded.

Some journalists interpret this waving of the weapon behind the protesters as a warning gesture. Lukashenko has previously said that he still gives the demonstrators time to think, but from Monday no protests will be allowed.

The demonstration that took place on Sunday is considered to be the most numerous so far – about 150 thousand people took part in it.

Initially, people gathered in Independence Square, then went for a walk to the square near the hotel “Planet”, where there is also a monument surrounded by soldiers “Minsk – the city of heroes”. There were speeches by several leaders of the opposition Coordination Council, urging people to remain calm and not engage in any provocations to protect their lives and health. The crowd then went in the direction of the National Flag Square along Victory Avenue, which leads along the “Independence Palace”, Lukashenko’s working residence.

The militants and special equipment blocked the street to its full width, but the protesters did not enter into confrontations, approached the barricades and dispersed.

Lukashenko’s press service said protesters were preparing to “storm” his residence, but changed their minds when they saw the militants. The participants of the rally were “lacking courage” and they “ran in the opposite direction”.

TV3 reports, referring to the people of Minsk, say that despite the heightened feeling among the protesters, the atmosphere in the Belarusian capital is threatening.

If people were ordered to shoot, peaceful protesters could be saved only by the soldiers’ refusal to comply with the order, but no one knows if that would happen. Lukashenko warned that giving protesters time to think, but from Monday both rallies “putting an end”.

In Belarus, since the presidential election on 9 August, peaceful demonstrations have been taking place every day in various cities to protest against the falsification of election results and the violence of protesters against the forces of power.

Protesters are demanding the release of political prisoners, the renewal of the 1994 constitution, which limits the term of office of the president, and the holding of new, open and fair presidential elections.

In the first few days of the protests, more than 7,000 people were detained in inhumane conditions, humiliated, beaten and tortured.

The European Union does not recognize the results of the elections in Belarus.