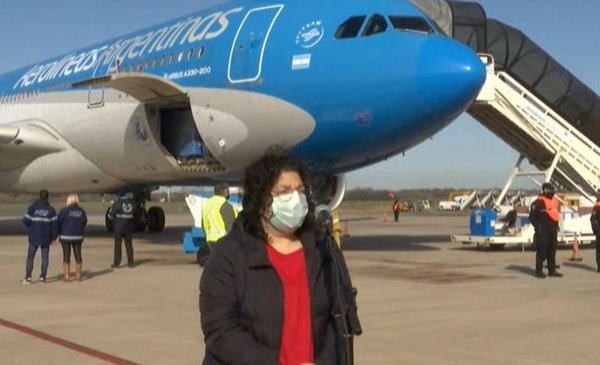 The Minister of Health, Carla Vizzotti, said today that “there is no vaccine against the coronavirus in the refrigerator” and said that the distribution process is “sustained when there are large doses of income”, after Eduardo López, government advisor in the pandemic, it will qualify as a “failure of the distribution system” and denounce that “there are five million doses saved.”

“It is a process of great complexity. It strikes me that it is not understood, it seems that it was a strategy to say that vaccines are in the refrigerator when they are not. Vaccines are in constant movement since they arrive in the country and they are distributed in the provinces, “Vizzotti said in statements to the press at the Ezeiza airport.

The official said that Argentina “is very close to reaching the 50 million doses of coronavirus vaccines” received since the start of the vaccination plan, based on shipments that will arrive in the next few days. “We are arriving with 1.4 million doses from Moscow: with 400,000 corresponding to component 1 and 250,000 to component 2 and 500 liters of the active substance that go directly for its manufacture to the local laboratory in Richmond,” he said, and announced that ” By the end of this week, we will be receiving 300,000 doses of Component 2 from Richmond and possibly by the beginning of the other, when quality control is in place, another 300,000. “

“We also have pending to receive another 2.2 million doses of AstraZeneca, between the end of this week and the beginning of next week and two more arrivals from Sinopharm of around 768 thousand and 680 thousand doses each,” he added. In this way, he pointed out that “it continues to escalate, until now we have exceeded 47.5 million doses and with this number of doses we are very close to the 50 million doses received to continue advancing with vaccination.”

Vizzotti made statements to the press when he arrived at Ezeiza airport this morning, with a shipment of 650,000 doses of Sputnik vaccine. The Aerolineas Argentinas flight that traveled to Moscow in search of more doses of the Sputnik V vaccine, landed at 9.43 at the Ezeiza international airport.

The Airbus 330-200 aircraft, registration LV-GIF, under the number AR1065, brought in its warehouses 650,000 doses, 400,000 corresponding to component 1 and 250,000 to component 2. At the air terminal, the head of the sanitary portfolio gave a conference of press in which he offered details of the meetings he had with members of the Gamaleya Institute of Russia and the Russian Direct Investment Fund (RDIF).