In the secondary market, the Portuguese reference yield lost 2.3 basis points to 0.715%. In the accumulation of the week, national interest loses 15.1 basis points.

In Italy, the drop is even more pronounced if we take into account the whole week, with the interest rates dropping 26.6 basis points in five days. It was the biggest weekly drop in two months. Today, the country’s interest rates lost 1.7 basis points to 1.592%.

In Germany, the scenario is the opposite. German interest rates for ten years have now gained 0.7 basis points to -4.92%. In the week as a whole they also registered an increase of 4.4 basis points.

The main exchanges of the old continent were divided between ups and downs in the session this Friday, May 22.

The Stoxx600 benchmark index dropped a small 0.03% to 340.17 points in the second straight session in red. The losses in the European food, oil and banking sectors were the ones that most penalized, while the gains obtained by the tourism, media and automobile sectors prevented a further fall of the Stoxx600.

Lisbon’s PSI-20 (+ 0.62% to 4,241.25 points) recorded one of the most expressive increases, supported especially by Ibersol, which shot up 16% to the highs of March 10, but was the Milan index (+1 , 34%) which achieved the highest appreciation among European counterparts.

Investors once again reflected their apprehension about a potential further escalation in the trade relationship between the United States and China, as well as concerns about the worsening tension between Chinese authorities and the autonomous province of Hong Kong.

Also penalizing sentiment in the markets is the decision taken at the Chinese CP Congress, which, contrary to usual practice, has now chosen not to set an annual target for economic growth due to the uncertainty arising from the pandemic.

Euro and pound slide against the “safe” dollar

The dollar is again profiting from its more secure nature, compared to the two European rivals, on a day when the new protests in Hong Kong have revived investors’ fears.

Thus, the euro lost 0.47% to $ 1.0899, depreciating for the second consecutive session. This value is also the minimum recorded during this week. 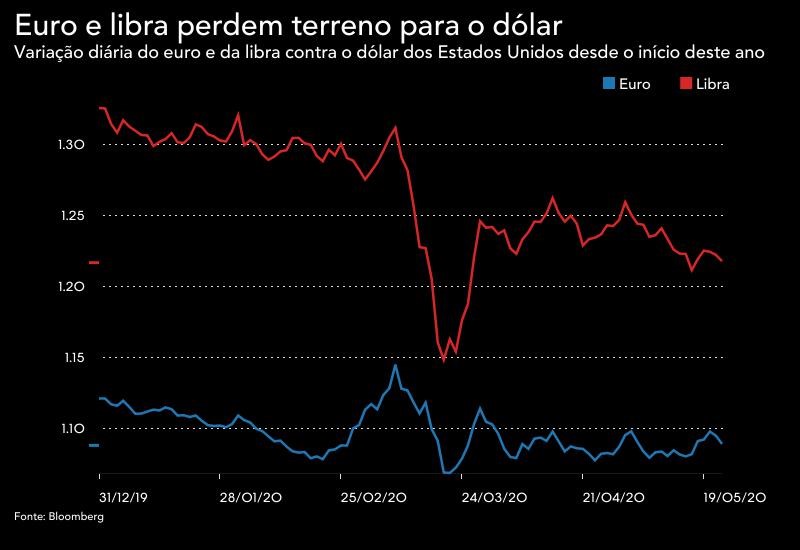 The prices of “black gold” continue to lose ground in the main international markets, pressured mainly by the increase in frictions between the USA and China and by fears about the pace of recovery in fuel demand.

The North Sea Brent July contract, crude traded in London and a benchmark for European imports, continues to yield 4.91% to $ 34.29 a barrel, with the day’s low to be set at 33.54 dollars.

The renewed tensions between Washington and Beijing, at a time when the Americans want to force Chinese companies to follow the accounting rules of the United States, under the risk of being expelled from the stock exchange, is contributing to pessimism.

In addition, US senators will also present a bill to sanction Chinese officials due to the new national security law for Hong Kong they intend to pass.

Despite today’s trend in raw materials, there are also fears about the pace of recovery in fuel demand, which fell sharply with the containment measures stemming from the covid-19 pandemic.

Gold sustained by the search for refuge values

The yellow metal continues on positive ground, capitalizing on its status as a refuge value, at a time when investors are seeking security due to protests in Hong Long, tensions between the US and China and concern over the economic impact of the covid -19.

The United States, which is putting pressure on China to make its companies listed on the US stock exchanges follow the country’s accounting rules, also does not welcome the new national security law for Hong Kong and wants to sanction Chinese leaders.

The American stock markets opened at a slight low, to be penalized by renewed tensions between the USA and China but with the prospect of more economic stimulus to curb greater losses.

The main Wall Street indices thus continue to be pressured by renewed frictions between the USA and China.

Yesterday, the US Senate passed a bill that requires Chinese companies to follow US accounting rules. Otherwise, they may be expelled from the bag.

The legislative proposal now needs to be voted on in the House of Representatives – and if it also has the green light there, it goes for President Donald Trump’s approval.

But this is not the only front of attack. US senators are also going to present a bill to sanction Chinese officials due to the new national security law for Hong Kong they intend to pass.

Counterbalancing pessimism in the face of these tensions between Washington and Beijing, and preventing further declines across the Atlantic, is the expectation of further stimulus in the United States to revitalize an economy heavily penalized by the “lockdowns” resulting from the covid-19 pandemic.

Europe stumbles but flees to red in the week

European stock markets are ending the week strong in the red, with breaks above 1%, at a time when relations between the United States and China deteriorate sentiment. However, for the week as a whole, the balance remains positive.

Stoxx600, which aggregates the 600 largest quoted companies in Europe, illustrates the negative trend experienced in the Old Continent with a fall of 1.55% to 335 points. In the week, however, there are 2.16% gains.

Under the spotlight of the markets is China, which brings together a series of bad news that lead to the same – feared and interconnected – consequences: relations with the United States are souring and the economic prospects of the Asian giant too.

With regard to the relationship with the United States, China offered to threaten retaliation for the Senate’s decision to pass a law that could harm Chinese companies that trade in North American territory.

To this point of tension are added the new protests in Hong Kong, which can serve as an argument for the United States to sanction China. The citizens of this province are speaking out against a new security law that the Chinese regime wants to implement in the region.

In the end, the Chinese economy may see health, already weak, even more affected by these events. Signaling that prospects are not the best is the Chinese Government’s refusal to come up with a target for this year’s gross domestic product, something that has been the custom for decades and whose absence the regime official justifies with high uncertainty.

Gold serves as a hat for rain of unrest in China

Gold rose 0.51% to $ 1,735.89 in the last session of the week, but it is not a sufficient increase for the accumulated since Monday to go green.

However, gold gains some ground in a context where the protests in Hong Kong are taking away the risk appetite for investors, who seek refuge in this metal. In addition to the protests, the fact that the Chinese government had refused, for the first time in decades, to advance a target for gross domestic product in the year, further shaken the sentiment.

The economic scenario in China is worrying, drawing strength from the oil recovery, although the balance remains positive during the week.

The Chinese government’s reluctance to advance a forecast for this year’s gross domestic product (GDP) has raised suspicions that the post-covid economic recovery will not be as buoyant as was expected. At the same time, the worsening tensions between Washington and Beijing could also have adverse effects on the Asian giant’s economy and, finally, new protests in Hong Kong have agitated the environment in the country. 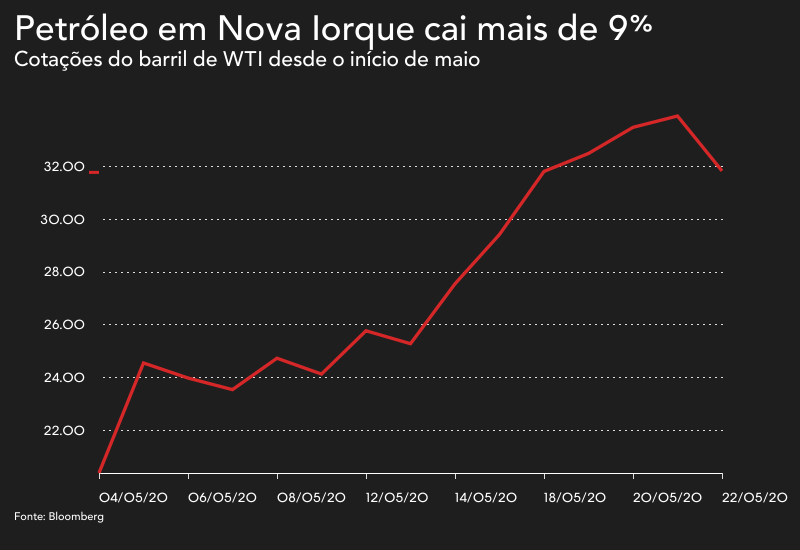 Even so, black gold remains on the way for the third consecutive week of gains, amounting to almost 9% in the accumulated since Monday in New York and more than 6% in the English capital.

The pound is losing ground against the dollar on the day the United Kingdom revealed that in April it hit a record budget deficit of £ 62.1 billion due to spending to support the economy. The British currency yields 0.1% to $ 1.2206 and declines 1.7% in the quarter, making the pound the worst performing currency among the major currencies.

Portuguese debt, like that of other European countries, has benefited from the Franco-German proposal for a European Union recovery fund endowed with 500 billion euros. In the accumulated result for the week, the yield on Portuguese bonds fell 13 basis points, after having already fallen 4.4 basis points in the previous week.

The financial rating agency Fitch will be able to comment today on Portuguese sovereign debt. The analysts surveyed by Negócios rule out a stir this Friday.

In the German debt, which is serving as a refuge in the face of falling stock exchanges, today’s decline is more intense, with a drop of 1.9 basis points to -0.516%.

The futures of European and North American exchanges point to losses looking at the recent past in Asia: the Hang Seng index in Hong Kong fell by more than 5% after new protests were raised in the city over a security law that the Chinese government wants to launch.

The Chinese government’s intentions could reignite the violence of protests in Hong Kong the previous year, when citizens revolted for months on a similar ground of contention.

At the same time, tensions between the United States and China appear to be worsening, after the US Senate in turn approved a piece of legislation that allows restrictions on Chinese companies to be listed in the United States. Beijing responded with a threat of retaliation.

Then there are growing fears that Donald Trump will use the tough stance against China as a political weapon, and that the protests in Hong Kong will serve as yet another argument for the White House to penalize the Asian giant.

“Geopolitical risks are relevant,” argues BlueBay asset Management, cited by Bloomberg. “It is a potential source of weakness and correction”.

‘Canto a Galicia’ by Guidetti: ‘Much better than that year at Feyenoord’

John Guidetti is still adored in Rotterdam South after that one Feyenoord season: in...
Read more

Deaths in Italy at lowest for more than two weeks

Tariq Al-Sayed: I refused to move to Al-Ahly because of Al-Khatib’s sentence