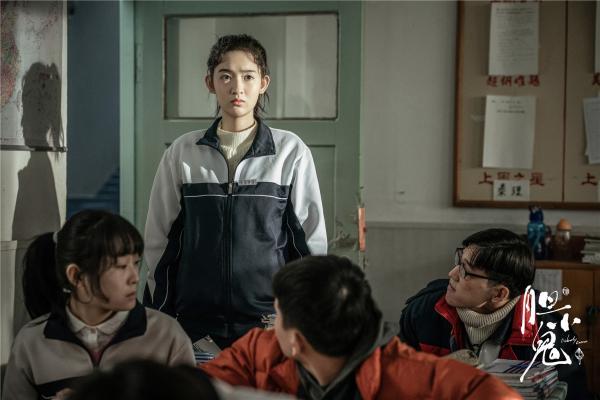 On August 8, produced by Ningmeng Pictures, co-produced by Youku, written by Zheng Zhi, directed by Zhang Xiaobo, starring Ou Hao and Wang Yanhui, and starring Wang Yuwen and others.coward“Officially aired.The play is adapted from Zheng Zhi’s original work.novel《Swallow raw“, once it was broadcast, it caused a heated discussion among the audience, among which Huang Shu, played by Wang Yuwen, became the center of the topic.

In the updated plot on the first day, Huang Shu appeared in this Yuying Middle School as a transfer student. She was beautiful and unsurprisingly became the object of discussion among classmates. There were rumors about her family affairs, but she did not change her attitude towards others because of this. in principle. Huang Shu came across Qin Li to buy a basketball, and found that Qin Li didn’t have enough money, so he naturally helped him make up for it. When she learned that Qin Li bought the best basketball in the store for a friend, Huang Shu not only admired Qin Li, but also envied the friendship between him and his good friend. And Huang Shu treats her friends even more warmly. Huang Shu, a newcomer, came forward to defend her classmate Feng Xuejiao when she was mocked by the boys, and the two built a bridge of friendship. Also an innocent young man, Huang Shu quickly integrated into the small circle of Feng Xuejiao, Qin Li and Wang Di, and the bond between the four gradually deepened.

In the final picture, Huang Shu is performing a dance performance at a cultural show, and the camera staggers between her bright smiling face on the stage and her pale corpse in the snow, forming a strong contrast. Huang Shu’s sudden delisting made the audience sad, and the rapid progress of delisting just after going online made it too late for the audience to switch emotions. Wang Yuwen also followed the drama with everyone on Weibo, and posted on her blog that “Student Huang Shu was forced to go offline, wait a moment and I will try to log in again…”, which eased the audience’s sadness and aggravated the audience’s eagerness to see The mood of the sequel.

Previously, Wang Yuwen had played the role of the school flower in many film and television works, especially Deng Xiaoqi played in “Youth School” was lively and lovely, which was even more impressive. In “The Coward”, although Huang Shu played by Wang Yuwen is also a school girl, her character is completely different from her previous roles. Huang Shu is a beautiful girl who walks with fragrance in the eyes of her classmates, and her warmth and sincerity has become the key point that the audience loves her. Wang Yuwen created Huang Shu’s multi-faceted character by fitting the image of the character and figuring out the character. Gentle and considerate in the face of friends, and indifferent in the face of others’ malice, these constitute a full and lively Huang Shu, which has also been recognized by the audience. Many netizens praised “Wang Yuwen has a high degree of reduction and played Huang Shu in the book”, “The feeling of Wang Yuwen’s appearance made me recognize that she is Huang Shu”.

As an important figure throughout the past and present, Huang Shu’s offline pushes the plot to a small climax, and the sense of suspense also peaks when the camera focuses on her body. Who is the murderer who killed Huang Shu? Let’s follow “The Coward” and continue to pursue the truth of ten years ago.