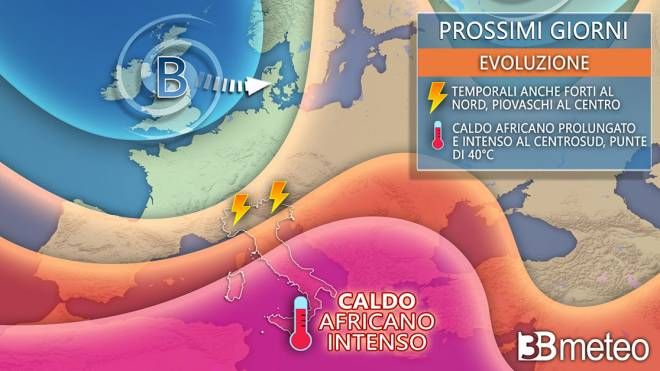 Rome, 27 July 2021 – It will be a very difficult week on the front weather forecast: before ‘classic’ bad weather, the one made of showers and thunderstorms. Then the one characterized by muggy and hot.

the weather forecast from ilMeteo.it they say that up to Wednesday 28 July our country will still be split in two: strong storms in the North, anticyclonic domination in the South. Subsequently, however, the scenario is destined to change, with the African anticyclone that will expand more and more throughout Italy, giving life to what can be remembered how the strongest heat wave of the summer.

Bad weather, floods and landslides in the Como area / VIDEO

For what concerns the day of Tuesday 27 July experts report that storm instability it will affect the alpine and pre-alpine areas and the plains, especially those of Piedmont, Lombardy, the northernmost Emilian ones, up to most of those of the Triveneto by evening. On these sectors they are not excluded very strong phenomena, such as hailstorms and gusts of wind. In the Center South, however, the weather will be stable, sunny and very hot. Wednesday some residual storms may still wet some corners of the North.

Hail and increasingly strong storms, the meteorologist: “I’ll explain why”

But, as announced a few days ago, by Thursday 29 July and until the whole of next weekend, a heavy heat wave will cause the mercury columns to rise throughout Italy until they probably touch new heat records in many sectors of the South, with peaks even beyond 44/45 degrees: this will be the strongest heat wave of the summer, especially with reference to the temporal duration, especially in the South, where the heat has not given up for weeks.

See also  Al-Quds News Agency - The heat wave continues in Lebanon... and will intensify soon, and a warning of fires!

(The article continues below the widget)

Hailstorms tripled in Italy with 11 ice storms per day since the beginning of summer compared to the same period last year with damages for millions of euros on crops and agricultural structures. This was revealed by an analysis by Coldiretti on ESWD data in references to the latest wave of bad weather that is hitting all the northern regions “with patchy hail bombardments that spare nothing, from vineyards to fruit, from vegetables to corn” . The agricultural organization stresses that “the fall of hail is the most feared event by farmers at the moment because it hits the crops close to harvest with irreversible damage that makes them lose a whole year of work”. Coldiretti reports that “the summer of 2021 has up to now the largest number of ice storms in the last decade with a negative record of 386 events with a geometric increase compared to 31 in 2012 or 27 in 2015 “. The organization adds that” the incidence becomes more marked from 2018 onwards when 92 hailstorms are recorded which in 2019 double (198 ), remain at worrying levels (120) in 2020 and then reach their peak this year. “Coldiretti also notes that” the arrival of bad weather accompanied by hail puts the national production of summer fruit at risk this year. of the crazy climate has been practically halved with drops ranging from 40% for peaches and nectarines to 50% for apricots, compared to a normal year.

Audiobooks for the summer: 5 great classics to listen to on vacation