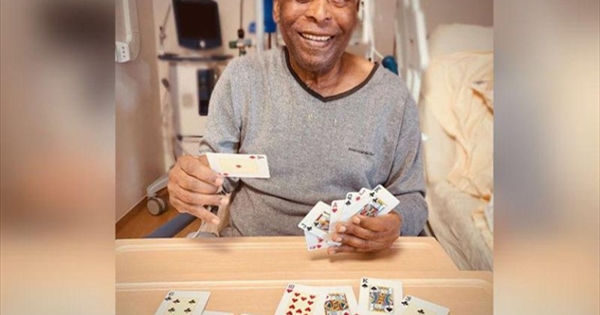 Brazilian football legend Pele has taken “several steps” in his recovery in hospital after surgery to remove a colon tumor three weeks ago, his daughter wrote on her Instagram account.

“In these last days, he’s taken several steps,” Kelly Nascimento said in a message accompanied by several pictures of her and her father playing cards.

The three-time world champion appeared smiling and in good shape in the pictures.

On Wednesday, Kelly published a video clip showing Pele singing the anthem of his favorite club, Santos, with whom he starred between 1956 and 1974, before joining the New York Cosmos team at the end of his football career.

Pele, with his usual sense of humor, also posted a video on Tuesday showing him exercising on a bicycle.

“Friends, I am sending this video my wife made today to share my joy with you,” Pele, 80, wrote on his Instagram page. “I am surrounded by emotion and encouragement that makes me feel a little better every day. By cycling, in this way, I will be back soon to Santos” in Sao Paulo where he lives.

The “King” Pele appeared in the video on a bicycle, while two medical staff at Albert Einstein Hospital cheered him on, while one of them said, “Well, that’s it, champ! Excellent! A little more than that,” to which the 3-times world champion replied jokingly Extending his tongue as if exhausted.

Pele, who won the World Cup with Brazil in 1958, 1962 and 1970, underwent surgery on 4 September to remove a “suspicious” tumor in his colon that was discovered during routine examinations. He remained in the intensive care unit until the 14th of it, before being transferred to a normal room, but he returned briefly to the intensive care unit on Friday, “as a precaution” due to a minor “respiratory disorder”.