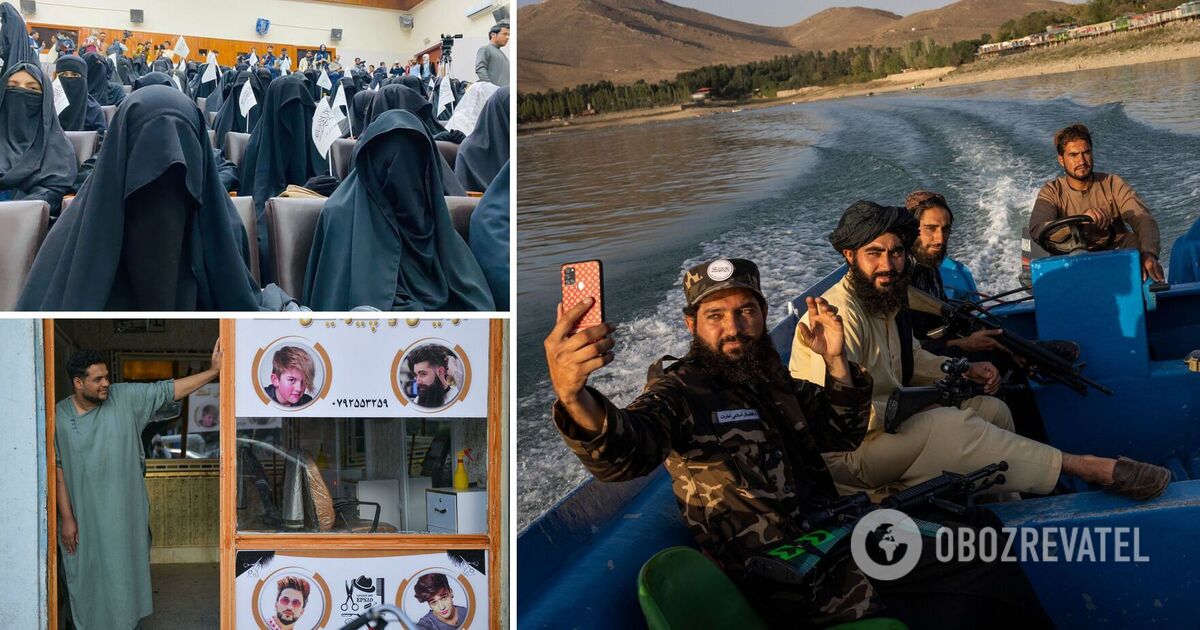 Action fighters “Taliban“they continue to introduce new bans and harsh punishments for the residents of Afghanistan. All this is happening despite the fact that the Islamists had previously promised to respect human rights. Now women cannot leave the house without an escort and special clothing, criminals are cut off their hands for theft, and hairdressers are forbidden to follow “American fashion”.

He tells more about the situation in the country right now OBOZREVATEL.

In Afghanistan, women were banned from studying or working at Kabul University, but this allegedly will not be forever – “until an Islamic environment is created.”

“Until a real Islamic environment is provided for everyone, women will not be allowed to enter universities or work. Islam is above all.” said the new rector of the university is Ashraf Gayrat.

Video of the day

Due to a shortage of female teachers, the Taliban-appointed rector is working on a plan for male teachers to teach female students through curtains in classrooms. Thus, an “Islamic educational environment” will be created for female students.

A similar ban was introduced for schoolgirls. Women teachers can no longer work in educational institutions either.

In addition, and.about. Mayor of Kabul Hamdullah Nomani banned women go to work “until the situation is normalized.” Because of this, all women will lose a source of income, except for those whose duties cannot be performed by men – for example, cleaning women’s toilets.

“A woman cannot be a minister – it is as if something is put around her neck that she cannot carry. Women do not need to be in government, they have to bear children,” said Taliban spokesman Syed Zekrullah Hashimi.

In the central square of Herat, Islamist militants hanged the bodies of four men involved in the abduction of a local resident and his son.

Afghans spread on social media video (Attention, these shots may shock you!) with bodies of people in the back of a car, one of which was hanging on a winch. On his chest there was allegedly an inscription: “This is how the kidnappers will be punished.”

“The purpose of this action is to warn all criminals so that no one else dares to commit such a crime,” the Taliban commander, who refused to give his name, said in the square.

The group’s leadership decided return public executions and limb amputations, which were previously performed at the Kabul Sports Stadium. “Chopping off the hands is absolutely essential for safety,” said Mullah Noruddin Turabi.

When the Taliban were in power in Afghanistan last time – in 1996-2001 – they practiced corporal punishment and public executions in stadiums. For example, those accused of theft were cut off an arm or a leg, and the murderers were shot in the head by the relatives of their victims.

In response to a question from reporters, Turabi dismissed outrage at such punishments, saying that it gave them “complete security in all parts of the country.”

“Everyone criticized us for punishing us in the stadium, but we did not say anything about their laws and punishments. Nobody will tell us what our laws should be. We will follow Islam and establish our laws based on the Koran,” added a senior Taliban.

The total bans apply not only to ordinary citizens, but also to the Taliban fighters themselves. The group’s leadership banned their fighters wear western clothes (in particular, white sneakers), driving too fast and taking selfies, especially when meeting with high command.

All this, according to Defense Minister Mawlavi Yakub, is “the behavior of the military leaders and bandits of the puppet regime” and if the militants imitate them, the Taliban “will lose the Islamic system.”

Taliban banned male barbershops cut or shave clients’ beards… The authorities substantiated the new rule with the requirements of the norms of Islam.

According to the owners and employees of the hairdressers, the ban means the virtual destruction of their business. “This has been my job for 15 years, I don’t think I can continue doing it,” said one of the barbers, who asked to remain anonymous for security reasons.

Barbershops, writes The BBC, after the ouster of the Taliban from power in 2001, enjoyed unchanged popularity, primarily among young people.

Now, instead of him, there will be a department of morality. During the previous reign of the militants, this ministry enforced a strict Sharia system, following the medieval model, which, in particular, provided for significant violations of women’s rights.

Then the so-called morality police was formed, which patrolled the streets and checked how Afghans obey Sharia. Various entertainments were prohibited, such as music, dancing or playing chess. Men were forced to grow beards, and Western-style haircuts were frowned upon. Those who broke the rules could be beaten, body parts cut off, or even publicly executed.

See also  Covid in the world: deaths, infections and all the latest news