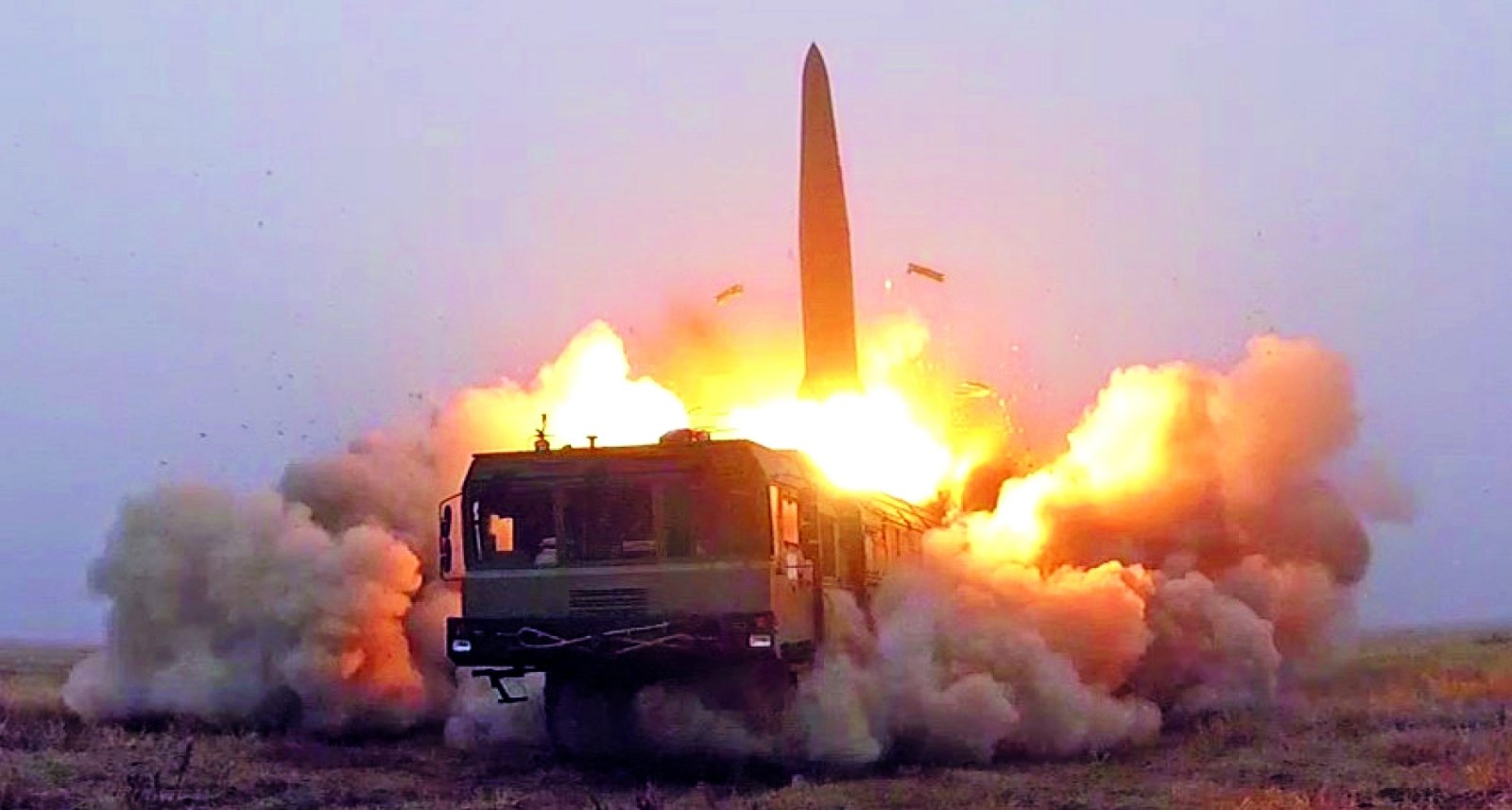 According to Moscow, the Russian armed forces during an exercise in Kaliningrad imitated an attack with missiles capable of carrying a nuclear weapon.

The news of Russia’s “special military operation” in Ukraine for more than two months may have been really intimidating: yes, Iskander is indeed deployed in Kaliningrad, and yes, these short-range ballistic missiles can carry 80 kiloton nuclear warheads.

In addition, the President of Russia Vladimir Putin since the start of the military operation in Ukraine has made it clear that it is ready to use Russia’s tactical nuclear weapon. In late February, Russia declared increased readiness in its nuclear armed forces. The Kremlin’s host has also warned of “lightning” revenge if the West intervenes directly in the conflict in Ukraine.

The West, which is under such pressure to intervene, has not shaken – military aid continues to be provided to Ukraine, but the recent militant rhetoric from the Kremlin-controlled state channels has been directed not only against the Ukrainians but also against NATOall the West, which can and must be destroyed by nuclear strikes, makes one speculate whether this is not preparing Russian society for an even more disastrous conflict.

Russian state TV is raging about WWIII and an inevitable escalation over Russia’s invasion of Ukraine. Citizens are being primed to believe that even the worst outcome is a good thing, because those dying for the Motherland will skyrocket to paradise.https://t.co/PzAt9jCBLt pic.twitter.com/DK2mXXWdfe

And against the background of all this tension, like a cherry on the cake, the news about the “Iskander” exercise appears. This seems to be just another proof that the Russians are already preparing for an imminent confrontation with the West. But is it really the latter exercise that shows this?

For example, the fact that about 100 soldiers imitated the electronic launch of Iskander mobile ballistic missile systems capable of launching nuclear-armed missiles, the Defense Ministry said in Moscow on Wednesday, could be interpreted in various ways. For example, it can be seen as a preparation for real combat action.

“The armed forces have learned to attack the military targets of an imaginary enemy and to respond to a retaliatory strike.

The missiles rushed unnoticed to the intended positions, from where it was possible to hit various targets – simulated missile systems, aerodromes, protected objects, concentrated military equipment and headquarters, “the Russian Ministry of Defense said in a statement.

Such simulations, ie electronic launches where the missile itself is not fired and the Iskander merely simulates its shot in cyberspace, are essentially the same as shooting exercises with simulated ammunition.

After such simulated shots, like the infantry after the ambush, Iskander performs standard actions: leaving positions quickly to avoid retaliation.

Thus, in the context of the war in Ukraine and in response to threats from NATO, that Russia will consider Western military aid as legitimate targets, it could be a clear signal from Moscow to whom it is committed, as long as the need is felt. The will is already there.

Not the first such exercise

But it can be viewed differently. For example, that the dry and standard Ministry of Defense report is no different from the previous ones. Russia holds more than one such exercise per year in Kaliningrad, which also simulates electronic Iskander shots were held in mid-April. And such exercises have been repeated for years.

Almost identical messages with the same content and context then did not receive as much interpretation and deliberation as the message Russia is sending here, whether it does not mean a first blow with nuclear weapons. The fact that the Iskander can carry a nuclear head does not mean that the simulated punches in the exercise are made with these rather than conventional 500 kg heads.

On the contrary, the named targets of the exercise legend (missile systems, aerodromes, concentrated military equipment and headquarters) are large enough, usually stationary objects, to be fired by conventional heads.

The Iskander-like Točka-U, which is used on both sides of the war in Ukraine, has cassette cartridges that spread over a large area, detonating above the target.

The war in Ukraine is the best example of the fact that, at least for the time being, despite all the warnings about the dangers of using nuclear weapons, all Russian ballistic and cruise missiles that can carry nuclear warheads, from Iskander to Kalibr, use only conventional ones.

In fact, Iskander has been used more than once in Ukraine – the missiles were fired by the Russians both from their own territory and from neighboring Belarus. In March, for example, Iskander hit by Retroville shopping and entertainment center run by Lithuanian company BT Invest.

Thousands of missiles have already been fired

The fact that Iskander can transport nuclear warheads and destroy well-protected or large military and civilian facilities is, of course, an undeniable fact.

But this message can be highlighted on purpose – intimidating NATO allies, creating an atmosphere of uncertainty, creating hesitation, because only the organizers and participants of such exercises know what the real targets are even in simulated shots, what kind of head is installed in a combat-ready Iskander.

And the time for this was chosen not by chance: in recent weeks, Russia has been increasingly targeting Ukraine’s critical infrastructure – aerodromes, railway junctions, power plants, bridges – with cruise and short-range ballistic missiles.

Another video of the Russian missile strike on the bridge in Dnipro.https://t.co/6PVNRTJuxt pic.twitter.com/NrDVklKyni

The aim is not only to undermine the will of the Ukrainians to resist, to press them psychologically, because it is especially difficult to shoot down such missiles, and their damage is great.

This is also done in order to disrupt or at least significantly complicate the supply of Western military aid, to break the ability of the Ukrainians to throw units and force them to disperse, and to change their locations more often. But the problem is that Russia has already fired a large part of its missile stockpiles – now dual-use missiles from the Bastion missile complex, which are already destined for ship destruction, are also being used against land targets.

The Russian MoD said it launched Oniks missiles from Bastion coastal defense complexes at an airfield near Odesa. https://t.co/sDOYbnJHHm pic.twitter.com/Ldaj9beXKs

According to the Pentagon, Russia had already fired 1,215 ballistic missiles (Iskander and Tochka-U) by the beginning of May, and figures ranged from 900 to 1.9 thousand for the Ch-101, Kalibr and others. there are large and difficult-to-change figures due to the sanctions imposed by the West and the lack of critical components.

Iskander’s electronic launches can be not only another intimidating signal to the West, but also a more practical one: the soon-to-be Iskander units in Kaliningrad from the 152nd Chernigachsky Brigade may be forced to travel to the front and simply need to train harder to succeed. rather than just hitting targets in cyberspace.

The fact that the Russian army looks menacing and always wins in exercises, as the war in Ukraine has shown, does not necessarily mean real combat readiness and ability to perform tasks. But for the time being, the Russians have to perform these tasks in the war against Ukraine, and not against Lithuania or even more so against NATO as a whole.