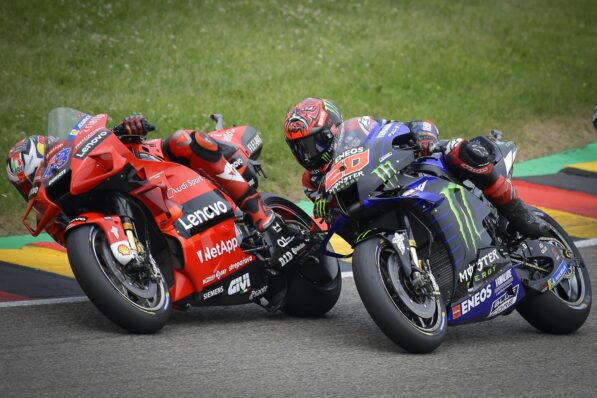 Third in the German Grand Prix, Fabio Quartararo was not the fastest but knew how to stay calm and manage his race to finish on the podium. A mastery which allows him to consolidate his position as leader of the championship “To be fast is one thing, to be fast and to think is another and I believe that this year, I am doing it better. “

You can’t win every time, but you have to know how to manage when things go wrong to be champion: this could be the summary of Fabio Quartararo’s Sachsenring race.

Starting from the front row, the Frenchman was not as thunderous as in previous weeks. He even seemed to be, during the first half of the Grand Prix, the most troubled driver of the leading group. Descended to sixth row and threatened by the men behind him, he did not panic and then managed to increase the pace at the end of the race. Climbing up to third ten laps from the finish, Fabio Quartararo then firmly defended his position, resisting the Ducati riders behind him. An important podium, because it allows him to score precious points when he could have lost some.

From the warm-up, he understood that this Sunday, June 20 would not be his 7th victory in MotoGP. “This morning we saw that one of our weak points was Sector 2. I knew we were going to have a hard time and that’s what happened. I was extremely slow in turns 6 and 7. The rest was fine but I suffered a lot in these turns where we stay a long time on the whole. With the team we said ‘Ok, we have a good rhythm but fighting for the victory is going to be very difficult’. The objective was to finish in front of the Ducati riders, to try to make a podium, and we did it. It’s a good job because we were struggling, with a different feeling from the previous races. “

Author of the best exit from the grid, the Yamaha rider was overtaken by Aleix Espargaro and Marc Marquez at the first corner. Sixth after 9 laps, he did not lose his temper and agreed to let the victory slip away in front of him. It was better to manage the situation and take the points to take, rather than try everything and go wrong.

“I got off to a good start but it was difficult to brake late in the first corner, which is something I have to work on. When the rain came I thought at Le Mans where it went well, but overtaking on this circuit is a nightmare. I knew that with Marc in front and Miguel second, they were going to leave. I was with Aleix and Jack, I had to manage the tires. On this race I learned to manage, to be calm. This podium was important because we did not have the correct feelings; they were good, but not correct. “

This result obtained when everything was not ideal for him illustrates his new approach to racing, more mature than in previous seasons. “The bike is progressing. Last year’s performance was good, but on some tracks it was a total disaster. This year I have more feeling with the front. Here we had a hard time, but each time I am getting more experience. I’m learning, because when I was 5th and I saw Marc and Miguel leave, in the past I would have pushed hard to overtake and try to start with them. Or at least with Miguel. More than being fast, I think I think a little more on the bike. Being fast is one thing, being fast and thinking is another and I believe this year I am doing it better. “

The Frenchman also saved Yamaha’s honor in Germany, as his teammate Maverick Viñales passed the race in the last positions. “It’s true that this weekend the feeling was different, the front was a bit strange, the rear… Let’s say the general feeling was different, he comments. They try a lot of things but I prefer to watch the riders in front of me, not just the Yamaha riders. I am more focused on myself. Maverick is very fast, he won the first race in Qatar and will be there in Assen. “

His advantage over his runner-up, Johann Zarco, goes from 14 to 22 points. Fabio Quartararo leaves Sahsenring a little more leader of the championship, and almost certain to remain the boss during the summer break, without making it an obsession. And for good reason :

“It’s important but I have an example on the subject: I remember Marc (Marquez) in Thailand in 2019, he just needed to finish in front of Dovi to be champion, and yet we fought until the last moment. To win the championship, you have to win races and get podiums. I am of course happy to increase my lead, but I will go to Assen to fight for the victory, not to look at where Zarco will be. This is the most important thing to do because we are not even halfway through the championship. “

✪ Do you like our work? Help GP-Inside survive in becoming Premium : support a serious and passionate media, win its contests, enjoy an ad-free site, access all of the content. Attention: last days for the introductory offer!