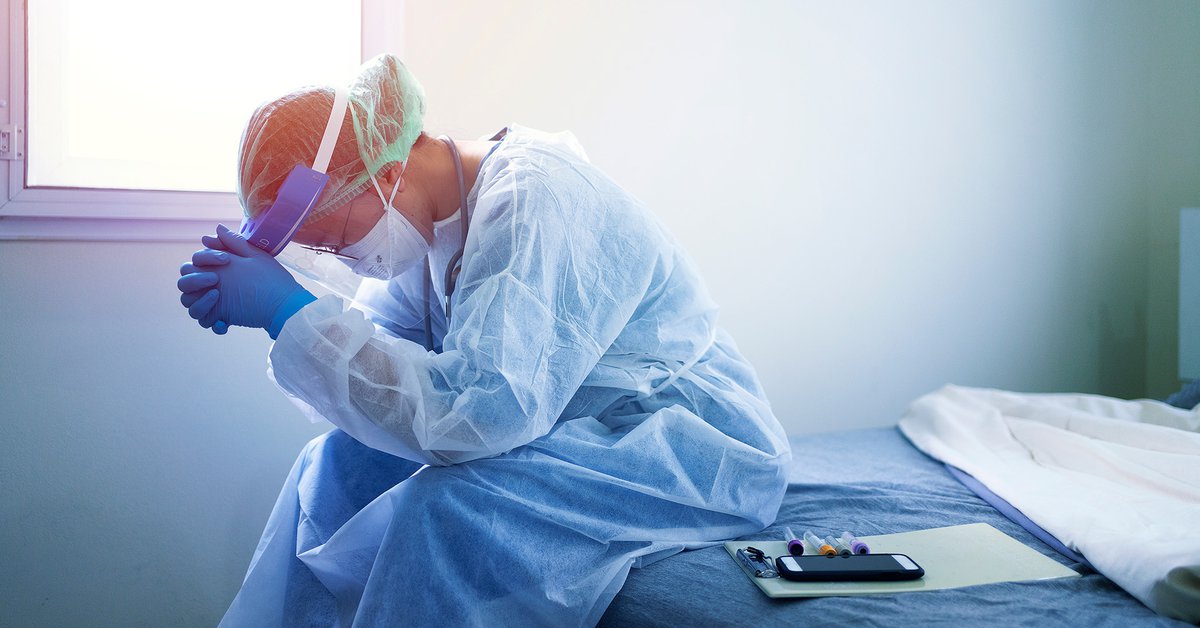 The effects of the pandemic are likely to be observed in two stages: an immediate one, which is what is being observed now, and a late or cumulative one (Shutterstock)

Much and varied has been written at this time about the effects of the pandemic on people’s mental health. And at this point, healthcare personnel are a large risk group.

Is that Doctors, nurses, technicians, cleaning personnel and other members of the health system are located in what is called “the first line” of assistance from COVID-19. They are the warriors without armor or sword, who battle a disease against which there is no vaccine or treatment and that has been on the brink for more than seven months.

Suddenly, an unknown enemy came to haunt life as we knew it and homes became the best refuge. The landscape of the cities was filled with people with their faces covered and scenes from intensive care units crowded with patients and doctors who -literally- had to choose who to connect to a respirator and who to let die.

The entire population is immersed in an overinformation that does not collaborate, if it is about staying calm. And in that context, “COVID-19 health care personnel are the ones – in a very significant proportion – most affected by the virus itself, and this produces discomfort, anxiety, depression and stress”. For the psychiatrist Marcelo Cetkovich (MN 65636), “it is known that some people will experience some traumatic forms of stress and this has to do with being exposed -although not seen as much in Argentina yet- to high mortality rates among people that, under normal conditions, they could have attended ”.

The medical director and the Department of Psychiatry of Ineco told Infobae than “The effects of the pandemic will probably be observed at two times: an immediate time during the pandemic, which is what is being observed now, and an effect called ‘fourth wave’, which are late or cumulative effects”.

“The latter has to do with those people who for some reason (personal predisposition, the intensity of exposure to situations related to the pandemic or quarantine), persistently develop symptoms the specialist deepened. The fourth wave refers to the physical recovery of the people who were affected – respiratory rehabilitation in many cases is complex – and also their emotional and cognitive recovery”.

“The consequences of the virus are extensive”, highlighted Cetkovich, who pointed out that “on the other hand, there is the sequel in the psychic condition of the general population, which, as stated, is actually part of a normal response.” This group includes health professionals, who are going to be exhausted by an enormous effort: their mental state is currently similar to that of a soldier during his transfer to the battlefront. 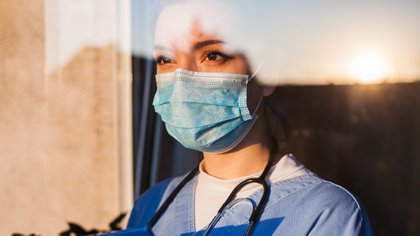 “The health care personnel of COVID-19 are those who are most affected by the virus itself, and this produces discomfort, anxiety, depression and stress” (Shutterstock)

And at that point, for him, “On the one hand, they will feel that tiredness, but on the other hand, given the vocational nature of medicine, most of them will experience a sense of pride for having been part of those who fought hand-to-hand against the pandemic”.

Some of them, however, are going to have psychic sequelae that will require attention.. “Health personnel today play a very important role in this regard, insofar as they adequately inform the population, without scaring them too much. Here then mental health health personnel play a fundamental role, because they will be in charge of listening to and caring for the affected people in this ‘fourth wave’ of the pandemic, ”the specialist explained. For him, “his first objective is going to be to determine if these symptoms that were named before, are part of this normal response or if – as it is going to happen in some or many cases – they really constitute a pathological condition”.

“It is not free to deal daily with people in conditions of human suffering, those who are permanently exposed may forget about taking care of their own health, and with honorable exceptions, the population takes little care of those who give their knowledge and their lives. For the doctor Silvia Bentolila (MN 59647 / MP 49677), professor at the Isalud University, “it is essential to consider communication as a key input for managing extreme situations. It must be effective both intra- and extra-institutionally and is key to protecting the mental health of the personnel and, consequently, controlling the situation. ”

Bentolila, who is also coordinator of the Mental Health Program for the doctor (PASMMe) of the College of Physicians of the province of Buenos Aires-district 3- and of the Care for doctors in crisis (AMEC) of district 5, highlighted that “There are key signs that professionals should be aware of when asking for help on time”. And she listed: “The. everyday stressors (constant decision-making in conjunction with pressure from family, colleagues and superiors, added to violence inside and outside the health fields), to avoid reaching the depressionsuccumb to anguish or a burnout (officially recognized as a disease by the WHO since 2019; being ‘burned’ can cause professionals negative attitudes such as aggressiveness and irritability impacting on the increase in conflicts), and the professional wear (chronification of stress that has negative consequences on health) ”.

And after assuring that “the main parameter that can be taken to know if it is a pathological condition is to see how much this impacts on the functioning of people”, Cetkovich considered that “The way to mitigate these effects is by giving them restraint, listening, accompanying and giving them tools to deal with”. “When people understand why they have to take care of themselves, they are better able to deal with the situation and that gives them security and avoids the negative impact of the symptoms of the pandemic,” he concluded. 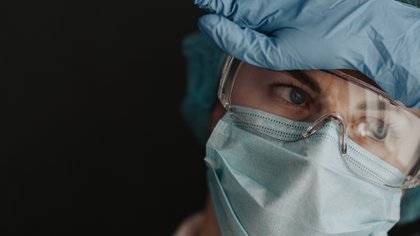 “The way to mitigate these effects is by giving them containment, listening, accompanying and giving them tools to deal with” (Shutterstock)

Under the motto “Take care of those who care”, the Undersecretariat of Mental Health, Problematic Consumption and Violence in the field of Public Health in the province of Buenos Aires carried out a work strategy for hospital staff several months ago.

“It is a work plan that has to do with the accompaniment to health teams, because it is the most necessary human resource for the care of the population“Said the head of the area, Julieta Calmels, who explained that at this time the professionals” are highly demanded, concerned, with fears, as they are going through a particular situation of greater exposure to the possibility of contagion. “

In the City of Buenos Aires, the Program “Caring for those who care”, is an initiative of the Buenos Aires government to contain and accompany health personnel, whose main objective is to promote the emotional care and physical well-being of these teams, who work every day to guarantee quality public care for all residents. in the framework of the pandemic.

It consists of a series of proposals that seek to bring closeness, encouragement and listen to those who receive them. On the other hand, this program allows to relive common factors that feed back internal processes and enable the development of improvements in the system. 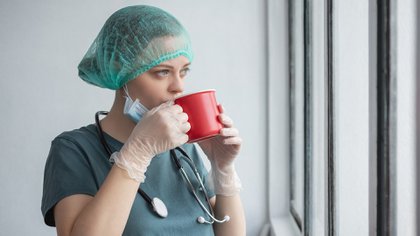 Available to key players in the health strategy, among which are the workers of 19 public hospitals in the City, the Emergency Operations Center (COE), health personnel in the Outpatient Isolation Units (hotels), of the Cesacs and DetectAR devices present in different neighborhoods of the city count With the contribution of professionals, including doctors, emergency specialists, psychologists, counselors, and coaches, they carry out the task together with a network of more than 300 volunteers..

Along the same lines, also in the City, an electrical appliance brand launched an action to respond to one of the specific needs experienced in hospitals, providing support for those who care for the lives of Argentines.

Under the name of “Containers for those who contain us”, the initiative consists of the installation of rest spaces so that health personnel can take a break, in the long working hours, in the most similar way to their homes. Equipped with coffee machines, microwave, refrigerator, electric kettle, the containers are 19 and are attached to the Febrile Emergency Units (UFU) owned by the Buenos Aires government in highly complex hospitals to safely care for patients with fever and suspected symptoms of COVID-19.

“We have entered a very difficult stage of the pandemic and we feel that it is time to be closer than ever. As a brand we have decided to focus our resources to accompany those who care for us on a daily basis, recognizing their effort and sacrifice, ”Marcelo Romeo, the company’s Marketing, Communications and Press manager, told Infobae.

How to care for those who care for us in the pandemic ?: the voice of experts who helped veterans of the Falklands and in catastrophes

Mental health and coronavirus: how to deal with the new types of stress and insomnia caused by the pandemic