What Thiem thinks about Federer, Wawrinka and his intimate enemy Kyrgios

First Grand Slam title for Dominic Thiem! The Austrian prevails in a dramatic final against Alexander Zverev in the tiebreak of the 5th set – despite a 0-2 set deficit.

The newly crowned US Open winner Dominic Thiem raves about Roger Federer. The Austrian also explains whether Stan Wawrinka’s backhand is stronger and what he thinks of Nick Kyrgios.

Rafael Nadal and Roger Federer were absent from Flushing Meadows, and Novak Djokovic stupidly took himself out of the tournament. But Thiem considers it important for himself that he has already won the major title.

“It has never been so difficult in any tennis era to win Grand Slam tournaments. It was important to me to get this title while Djokovic, Federer and Nadal are still there. I enjoy playing at the same time as these icons, even if it costs me the title. If I had only won a major title after the big three had left, that would have been a flaw, ”said the Austrian.

When Federer won his first Grand Slam title at Wimbledon in 2003, Thiem was nine years old. Two years later he watched the Swiss’s first battle against Rafael Nadal in Roland Garros. A few years later, Federer was on the other side of the network.

Federer and Wawrinka as milestones

“As a 16-year-old junior, I was allowed to train with him for the first time in Wimbledon’s Aorangi Park. At first I was completely nervous, hardly played a ball over the net. After a few minutes it was all right again. At that time I would never have thought in my life that one day I would even beat Roger », the now 27-year-old says of his new website fest.

Against the twenty-time Grand Slam winner, he currently even has a positive overall balance of 5: 2 wins. For the first time he hit his “favorite athlete” (“Because he is simply a complete exception – he embodies the term superstar”) in 2016 in Rome.

Back then, however, Federer also had back problems, as Thiem noted. Still, it was a special day for him. His biggest win against Federer was in the Indian Wells final in 2019. “Federer’s star potential is huge worldwide, even more gigantic in the USA. People like him everywhere! “

Dominc Thiem holds a Grand Slam trophy for the first time – after a highly dramatic final against Alexander Zverev. 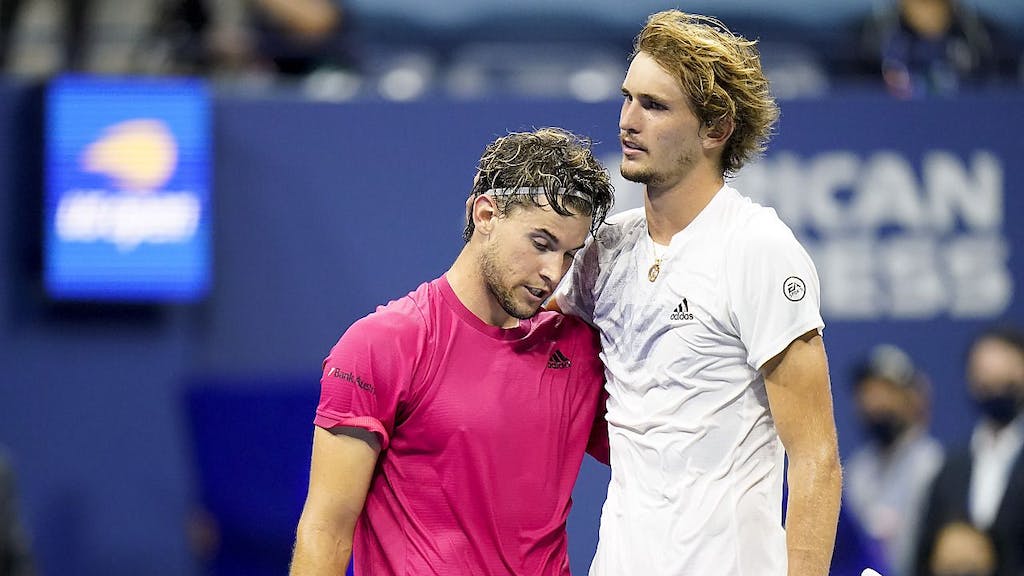 Dominic Thiem (left) and Alexander Zverev, good friends with each other, fought a wear and tear battle for 4:02 hours. 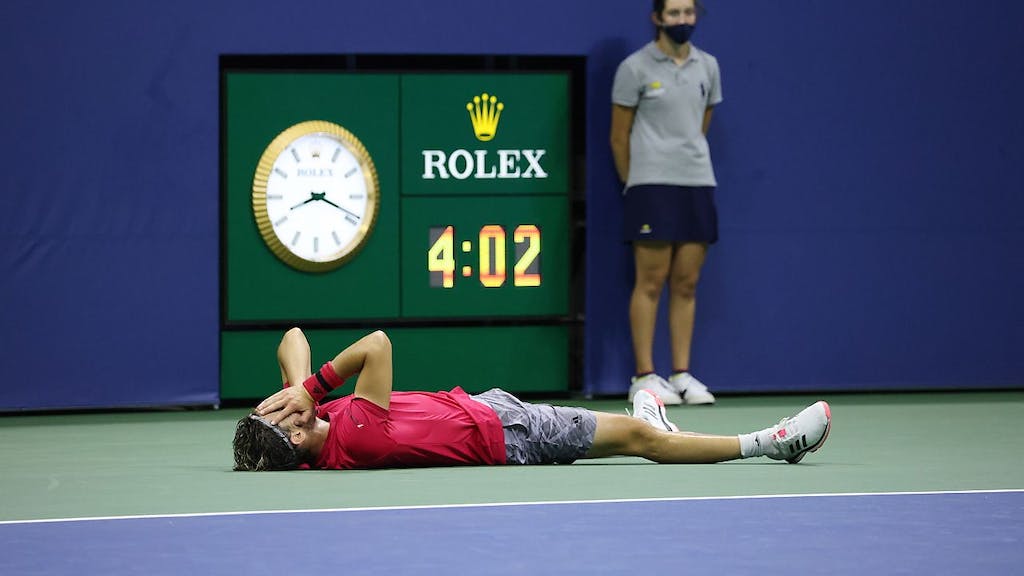 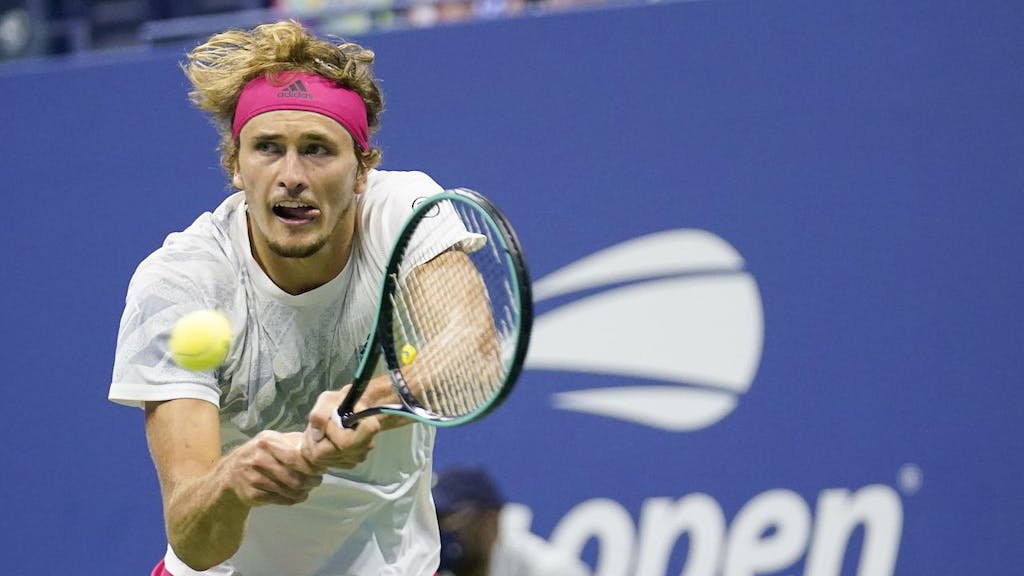 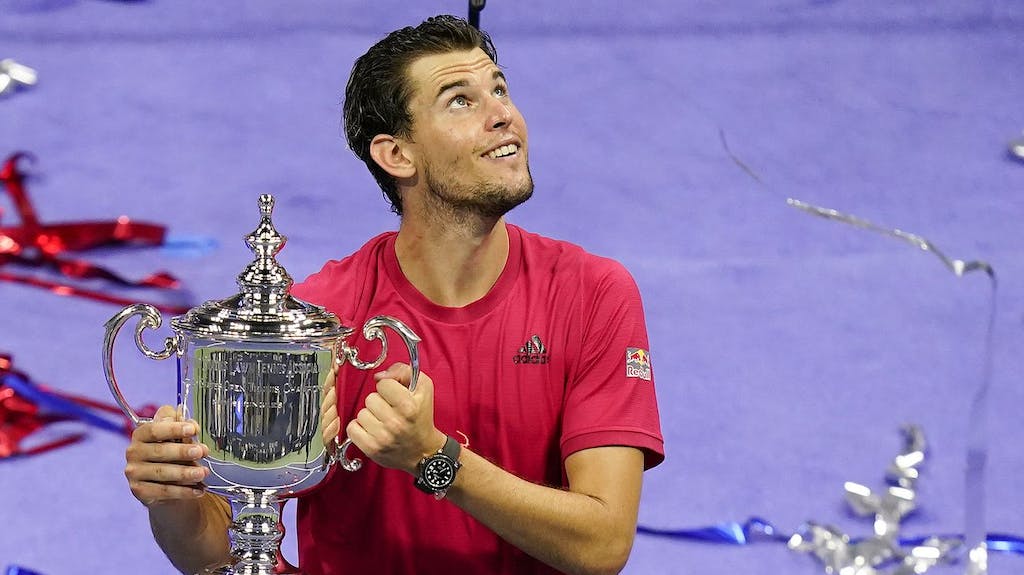 Dominc Thiem holds a Grand Slam trophy for the first time – after a highly dramatic final against Alexander Zverev.

Dominic Thiem (left) and Alexander Zverev, good friends with each other, fought a wear and tear battle for 4:02 hours.

What he particularly appreciates about the tennis legend is its qualities away from the court: “Federer is very, very funny and also completely relaxed. In the locker room, in a really small circle, he is a completely different person than on the square. Funny, open and he also loves little pranks. ” Meanwhile, Thiem (ATP 3) is even one place in front of his idol in the world rankings.

Thiem celebrated his first win against a top 10 player against Stan Wawrinka of all places: “2014 in Madrid, third round, night session, got the upper hand in three sets. We get along great too, but I envy his one-handed backhand. He’ll probably always be my role model for this blow. “

Nick Kyrgios is no role model for Thiem. The Australian did not spare criticism of the Adria Tour, which infected many players. Thiem also took part in the tournament, but was not tested positive for the corona virus. Kyrgios then denied Thiem and the other participants the intellectual level in order to understand the whole thing. Thiem said at the time: «Kyrgios himself has built a lot of nonsense. I understand it even less when he interferes everywhere. It would be better if he came to terms with himself instead of always criticizing others. ”

On the website, Thiem also comments on Kyrgios: «Distinctive, inexchangeable, completely unique! Tennis can be happy that this sport also has such stars. There has never been a guy like that, and there probably won’t be one anymore. Nick polarizes, many fans love him, many hate him. At heart he’s a really nice person, we explored the nightlife in Acapulco together years ago. Legendary.”

Police abuse: police lawyer in the case of Javier Ordoñez

The jurist said that "it is still very premature to speak of a responsibility as such," after indicating that...
Read more

“My impression is that the President is groggy, he is '' no answer '', as (Fernando) De la Rúa...
Read more

Survey: US Sees an Economy on the Way to Stabilizing – En Español

43% of Americans said they expect the economy to improve next year, about the same as...
Read more

Designer Elsa Serrano dies in fire in her apartment

Just yesterday we were surprised by the news of the acquisition of Bethesda by Microsoft....
Read more

Is Bitcoin’s growth conservative or real?

River wants to return to the triumph in the Copa Libertadores against Binacional: everything you have to know

Strong statements were made by...
Read more
Sport

Hussein Abdel-Latif: Muhammad Fadl is the director of the Football Association

The surprising mask: it is inclusive, it measures air quality and it self-disinfects – Health and Wellbeing

The face masks They have become the new mandatory garment in our country and...
Read more
Archynewsyarchynewsy.com