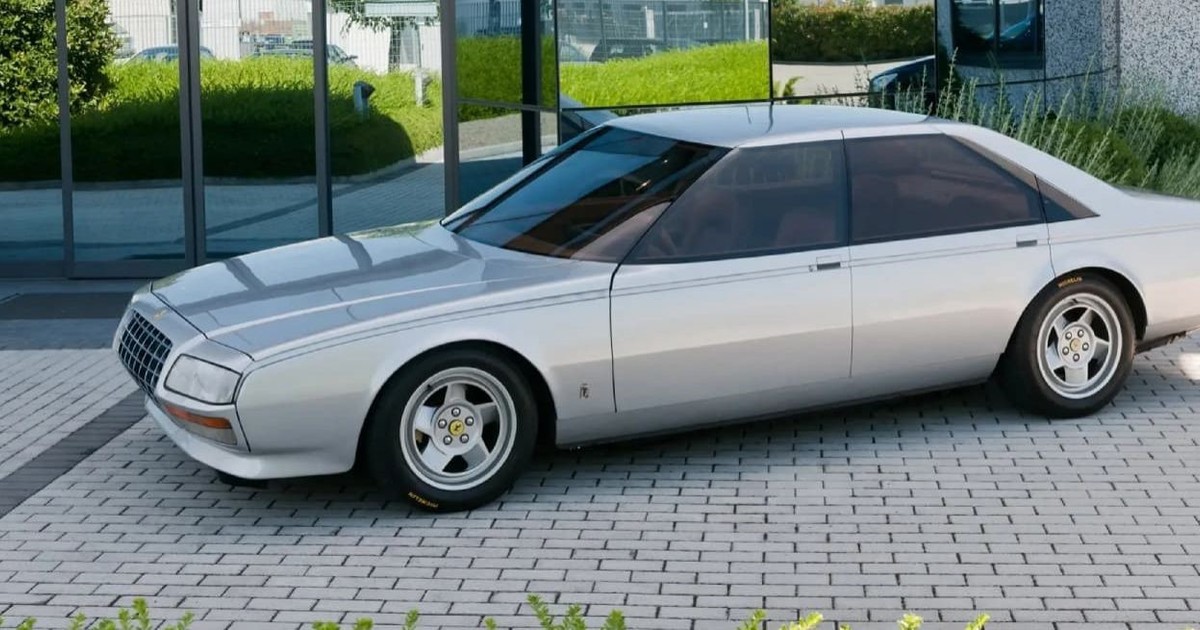 In 1980 they created a sedan to fight with Mercedes-Benz, Aston Martin and Maserati, but the popular bet won.

In so many years of history, the sports lineage of Ferrari It was never in doubt, not even in the less lucid times of the Maranello house. On the contrary, the brand was aged until it became the ultimate legend of the car universe. Ferrari is synonymous with sportsmanship from the very roots of its founder and the tremendous thoroughbred saga that the Cavallino created augurs an infinite legacy.

However, business is business. And back in 1980, when the brand belonged to the giant Fiat of the Agnelli family, those from Maranello went out in search of a formula that would allow them to gain a presence in the exclusive car market. Just as Aston Martin had the Lagonda, Mercedes-Benz with the 450 SEL or Maserati with the Quattroporte, at Ferrari they proposed to disembark with a 4-door model. Yes, a black pearl sedan from the rabid and exquisite collection of coupes and convertibles.

It was the first 4-door project of the Italian house.

In addition to that commercial objective, the appearance of the 4-door model project coincided with the 50th anniversary of the design center of Battista Pininfarinawhere the first strokes were given to so many Ferrari beauties.

Ferrari Pinin It was then the name of the prototype that was manufactured that same year and that in fact had very avant-garde design features. Striking and streamlined, the Pinin tried combine the lineage of Ferrari sports cars in a stately format and with a strong commitment to luxury. On paper, all fronts to fully impact the offer of Mercedes-Benz, Aston Martin or Maserati were covered.

It had very particular design details, such as the taillights.

That Ferrari was conceived as the ultimate expression of comfort on wheels for the time. Among its delicacies it had a Veglia-Borletti speedometer that remained black until the engine was started, an on-board computer, individual electric seats with memory even in the rear seats, a high-fidelity audio system that included headphones to listen to music and, the most top for then, telephone. In addition, that waste of technology was framed in a super luxurious interior with a cream-colored leather finish.

With a 12-cylinder boxer engine and a five-speed gearbox, the Pinin was shown at the Turin International Motor Show and the Los Angeles Auto Show. It was about the only prototype ever built of the two that were planned. And in fact its presentation in society happened before the model could shoot.

The interior exuded luxury and comfort.

That unit, 4,821 meters long, did not have the engine and gearbox connected, it was missing a large part of the electrical installation and it did not even have a fuel tank. Under these conditions, he returned to Maranello for the final approval of the project.

by then Enzo Ferrari had two very close collaborators: Claudio Sguazzini and Vittorio Ghidella, who, in addition to supporting his decisions The Commendatore They represented the interests of Gianni Agnellithe boss of Fiat, in the core of Ferrari’s power.

He even offered a phone.

As it transpired later, Sguazzini was in favor of the project, but instead Ghidella was the one who put up the objections that ended up stopping Pinin. It was not technical or design reasons that cut short the appearance of the first 4-door Ferrari, but an economic definition. Bringing that model to an assembly line like the one in Maranello was going to require a considerable investment, so the company decided to give priority to the popular car that was also showing up: the Fiat Panda.

The story then invalidates any questioning of that decision. The Fiat Panda was a success in Europe that mobilized thousands of families in more than 40 years, and although it has been three generations, it is still valid. The Pinin did not go beyond a prototype, although it did manage to roll.

It was equipped with a 12-cylinder engine.

In the early 1990s, a friend of Enzo Ferrari, Jacques Swaters, who was also the brand’s importer in Belgium, decided to buy it. He had it as a collector’s item until 2008, when he sold it for €176,000. It was not worth much more due to its poor mechanical finish.

But the new owner went further. From his contact with Mauro Forghieri, old Ferrari engine designer, he managed to complete the Pinin: he connected the box with the engine, completed the wiring and the cooling system, and installed the missing fuel tank. Thus, the Pinin was finally able to get going and go out and shoot 30 years after its creation.

A single unit was made and owned by a collector.

Already completed, in 2011 it was put up for sale again through the prestigious auction house RM Sotheby’s. At first, a million euros was requested, then the price was lowered to 575,000 euros, but since there were no interested parties, the Pinin returned to Maranello, where an American collector bought it for an unknown figure.

It took 40 years after that project for Ferrari to return to break the mold with a model outside its super sports range. In this case, the Maranello brand has surrendered to the global trend and the rage of SUVs, and has just launched its first crossover, the Purosangue. Although with this hyper-exclusive 4-door the protection of maximum sportiness was assured: it is equipped with one of the traditional V12 that is a registered trademark of the Cavallino and that delivers 725 horses. In the end, DNA is not traded.