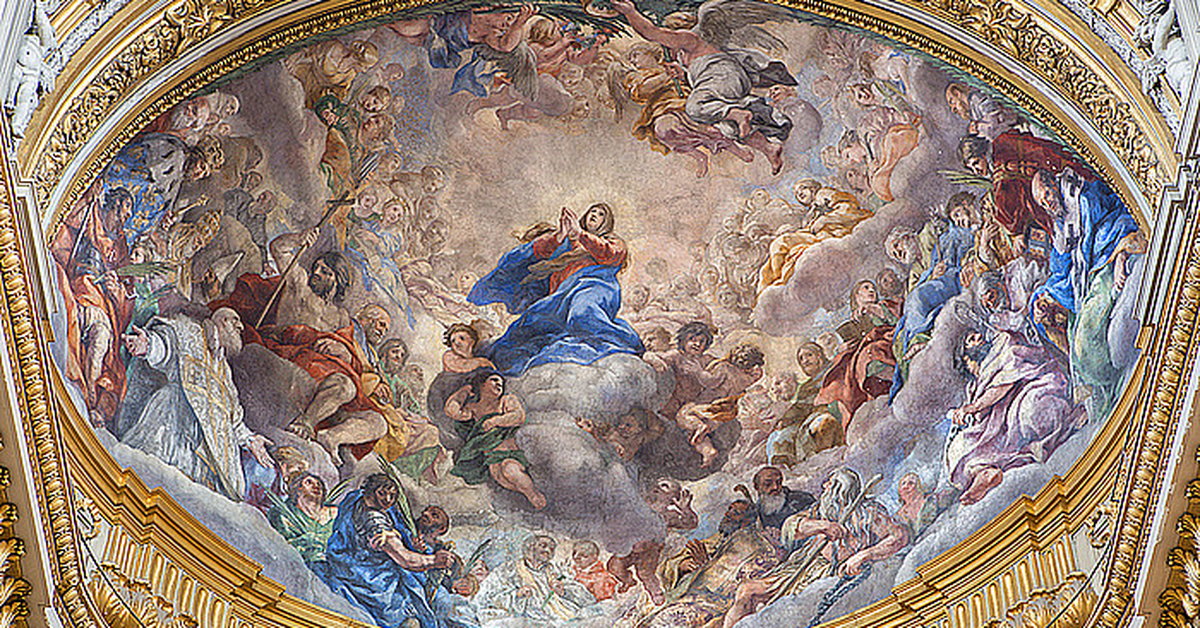 The most famous Greek apocryphal Transitus describes Mary’s Assumption in this way: The apostles carried Mary into the tomb and sat down together, waiting for the Lord as he commanded them. […] While they were talking together about science and faith and many other things, and they were sitting in front of the gate of the tomb, behold, the Lord Jesus came from heaven, and Michael and Gabriel were with him, and sat down among the apostles … Then he made a sign to Michael and said Michael in The speech proper to angels and clouds descended upon them, on every cloud thousands of angels and sang before the Lord, and the Lord told Michael to take Mary’s body into the cloud and put it in Paradise. […] And as they approached Paradise, they laid Mary’s body under the tree of life. And Michael brought her holy soul and placed it in her body. On the other hand, the Transitus of John the Theologian, a Greek piece commonly used during the liturgy of the Assumption, adds: And here the oil of the precious fragrance flowed from the holy tomb of the Mother of God. […] And we saw the place brightened, and there is nothing brighter than this light; and in that place we felt a lot of sweet fragrance.

As many as three locations, all backed by ancient and venerable tradition, pretend to be the authentic place where the Blessed Virgin Mary spent her last moments and fell asleep: Mount of Olives, Mount Zion and Ephesus.

The Church of the Dormition of Our Lady is located at the very tip of Christian Zion in Jerusalem. According to ancient traditions, an unknown disciple of Jesus, who received the Master for the Paschal Supper, gave hospitality to the young Church. Mary lived and fell asleep in his house. The early Christian tradition was maintained by the Crusaders.

Another early Christian tradition places Mary asleep and her tomb on the Mount of Olives. The basis of this location is mainly the Apocrypha of the Dormition of the Blessed Virgin Mary from the 2nd-3rd century. The Syrian version contains instructions for students: This morning, take the Virgin Mary and go out of Jerusalem along the road leading through the valley to the Mount of Olives. There are three caves there. The first one, the outer one, is spacious, behind it the second one, in the middle, and even further the third one, the inner one. There is an earthen bench in it from the east. Go and lay the Blessed One on that bench. According to tradition, the disciples buried Mary here. When the Apostle Thomas, who was absent during the transfer of the body, arrived shortly after, the disciples went to the tomb to show him the tomb and found it empty. In evidence of the Assumption, Mary gave Thomas an armband (Transitus of Joseph of Arimathea).

See also  This Place of Worship Becomes a Silent Witness to the Sinking of Jakarta, Gradually Becomes Part of the North Sea of ​​Java

In turn, the Janów tradition places the last years of her life on earth and the death of Mary on the Nightingale Hill in Ephesus (Turkey). John came to Ephesus to protect himself from the persecution of Christians in the Roman Empire. They lived with Mary on the Nightingale Hill, in a quite hard to reach, quiet place at an altitude of 358 m above sea level. Here Mary, a suffering old woman, spent the last days of her life away from the frenzy accompanying the birth of a new religion, which finally elevated her above all women on earth (D. Carroll). However, this place, worshiped from the first centuries, has been forgotten. Only the visions of Bl. Katarzyna Emmerich made it possible to rediscover and celebrate them. In 1892 the Archbishop of Izmir declared it “a place of pilgrimage,” which was confirmed by later popes; Paul VI and John Paul II made pilgrimages to the “house of Mary”. Currently, about a million pilgrims come here every year.

The variety of traditions shows that the time and place of Mary’s departure are not the most important. The most important thing is that he is in heaven with his Son and is waiting for us, asking for the favors we need. Her Son refuses us nothing because she has never denied anything to God. And the Father always listens to Christ (B. Martelet). Perhaps this plurality of places related to the Assumption of Mary is intended; maybe God wants as many places as possible (also related to the apparitions) to bring people closer to her, and through her to Jesus.

Apocrypha and local traditions, although often poetic, emotional and associated with literary exaggeration, have their justification in the Scriptures. Saint Paul teaches that Christ is risen first, and that all who belong to him are after him (cf. 1 Cor 15:22 ff.). In the Letter to the Romans he writes: “For those whom he knew from the ages, he also appointed to be conformed to the image of his Son, that he might be the firstborn among many brethren. He called – those he also justified, and whom he justified – he also glorified “(Rom 8: 29ff.). Among the chosen, called and glorified, in the first place is Mary. “Predestined, called, sanctified” like no other, united to his suffering like no other, Mary is now also “glorified” with him like no other: like no other human being (cf. 1 Pet 4:13; 2 Tim 2: 3.11). And through her, I am sure that my glory already lives in me, but hidden (D. Ange).

The Fathers of the Church emphasize that the Assumption of Mary and the glorification of her body result not only from supernatural motherhood (she is the Mother of God), but also from the holiness of her virginal nature. The holy, pure, indestructible body could not undergo the process of decay: “She who, having given birth to her Son, kept her virginity intact, also had to keep her body after death without the slightest trace of decay. She who carried the Creator of all things in her womb, must live with Him. forever in the perpetual tabernacle “(St. John of Damascus).

Mary’s spiritual and physical beauty in heaven was “magnified and completed”. In heaven, all the elect lose nothing of the virtues of their hearts and minds, on the contrary: by turning their earthly life into eternal life, the riches of their hearts are endlessly multiplied. Mary preserves all the virtues she had here on earth in heaven and always keeps our good in mind. She is still completely a handmaid, constantly absorbed in Christ and his Mystical Body, which is the Church. The closer he is to God, the closer he is to us (B. Martelet).

Mary’s body was resurrected, lifted up to heaven and glorified, as was the body of Jesus. Therefore, she can also repeat after her Son: “Look at my hands and feet: it is I. Touch and convince me: a spirit has no flesh and bones, as you see that I have” (Lk 24:39). Mary teaches us to discover and value not only the value and beauty of the spirit but also of the body. Our bodies, like that of Mary, are destined for glory.

Contemporary trends in the world unconsciously seek separation, the separation of the soul from the body. As a consequence, the body is sometimes treated as a “gadget”, a means, an addition to its own “I”. It then serves as a distributor of bodily pleasures or a simple work tool that can be used at any time (D. Ange). In the utilitarian-sensory approach to the body, it is forgotten that it is an integral part of the person and should be accepted, respected, loved and cared for. The body was created by God to be beautiful; is the “abode” of the Holy Spirit and through it we are to worship the Creator: “Do you not know that your body is a temple of the Holy Spirit who is in you, whom you have from God, and that you are no longer your own? for a great price you have been bought. Praise God in your body therefore! ” (1 Cor 9:19 ff.).

Ultimately our bodies are destined for “eternal youth”. It is an illusion to try to achieve it on earth. Modern advertising, medicine, cosmetics and technology strive for this. Youth is promoted in all varieties and possibilities. The elderly are shown at best when … advertising drugs that guarantee long life! Many young people who are unable to respond to the latest beauty and fashion trends become depressed and run into complexes. Meanwhile, youth on earth is limited and transient. Only in heaven, in God, who is changeless and “eternally young”, will we achieve the reflection of the beauty and maturity of God’s eternal youth. Daniel Ange writes: “Regardless of what age you have reached, your childhood, your adolescence, your youth has not remained” behind you “, but is still” ahead of you “. You are moving towards your eternal 17-18 years.”

Mary’s Assumption is a reminder that our homeland is in heaven (Phil 3:20). However, heaven opens above us already on earth, when we are with Jesus, when we remain in prayer, we participate in the sacramental life, and especially in the Eucharist. We are reminded of this by a rather trivial statement: the Eucharist is a foretaste of heaven. Of course, there are times when prayer, the Eucharist, becomes wearisome and tiring. But from time to time we probably also experience an atmosphere of closeness to Jesus, community, love, the opening of heaven. We then feel that everything else is relative, secondary. It is not a form of escape from everyday life into Quietism, but the awareness that the tedious everyday life and the repeated problems we experience with Jesus and Mary do not overwhelm us or burden us. Then we feel freedom and spiritual joy and the desire to share them. The experience of heaven sends us to hell, where there is emptiness and nonsense.