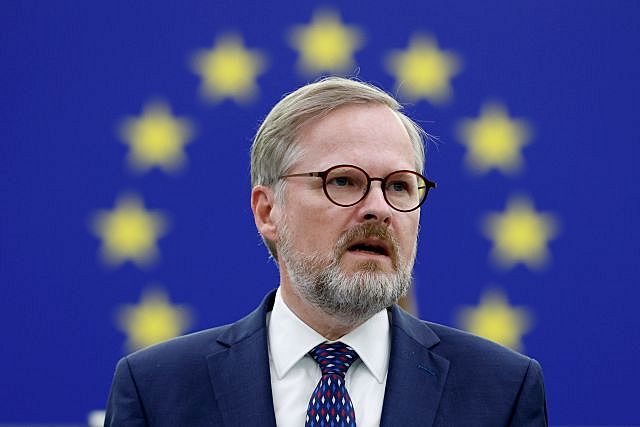 In reaction to the result of early elections in Italy the Czech debate quickly split into two camps. Some wrote that the Czech ruling party is making an agreement with the fascists, others that the Brothers of Italy are a normal right-wing party, and therefore nothing is happening. Both camps missed the mark. The impact of the Italian elections on the ODS should interest us – but for a reason that was not heard in the Czech debate.

First to fascism: Giorgio Meloni’s party founded ten years ago is based on the fascist movement in Italy and subscribes to it – the party put a flame in its emblem, which is a direct reference to the heir of Benito Mussolini’s legacy. But the extreme right is a permanent part of the Italian political scene and has repeatedly taken part in power – Meloni herself was a minister for three years in one of Silvio Berlusconi’s governments in 2008-2011.

Despite this, democracy in Italy was not in danger, and experts on the Italian scene say that it will not be this time either. The brothers of Italy, along with Berlusconi and Salvini’s League, will not attempt to dismantle the country’s independent institutions or abolish freedom of speech. They base their convictions on past experience, when the same politicians did not do so, although they had the opportunity.

If this estimate turns out to be wrong and Italian democracy nevertheless begins to suffer, it will mainly be up to the Italians themselves to prevent it. From the Czech point of view, it is important whether the Czechs get a partner in the new Italian government that will maintain and ideally strengthen their security in Europe or not. And what will the emergence of a hard nationalist and Eurosceptic party at the head of the third most populous EU state do to their allies, the Purple ODS.

We don’t know the answer to the first point. Giorgia Meloni fit into the role of critic of Putin after the Russian invasion of Ukraine, but in 2014 she supported the illegal referendum on Russian-annexed Crimea. Now he is on the side of the attacked state. As she accepted congratulations on her election victory from Volodymyr Zelensky this week, she said Ukraine can count on for Italian support of his fight for freedom. Which Giorgia will lead in the future will also depend on how much Putin’s mouthpieces in Europe will push her into a pro-Russian corner – i.e. her coalition partners Berlusconi and Matteo Salvini.

On the other hand, we know the answer to the second point. Again, the basic facts first. The ODS joined forces with the Brothers of Italy in 2019, when they joined the umbrella European platform of nationalist and Eurosceptic parties European Conservatives and Reformists, ECR. It was once founded by former ODS chairman Mirek Topolánek with former Tory leader David Cameron, when Britain was still a member of the EU. In the European Parliament, the Brothers of Italy have eight MEPs, the ODS has four in the 62-member faction. It is dominated by the Polish PiS with 24 MPs.

The victory of the Brothers of Italy in the elections does not change anything on the ground of the EP, at least for now. However, the dynamics in the Council of the EU, where individual governments are represented, are changing. The ODS did not have too many ideological companions here. After the collapse of the Visegrad alliance due to Orbán’s bet on Putin, it basically only had PiS left.

Since the September elections in Sweden – the new government will be based on the far-right Sweden Democrats, members of the ECR – and now even in Italy, with a population of sixty million, this is not the case. If Italy, Poland, Sweden, the Czechia and Hungary were to join together, they would only need to get one more medium-sized country and they would form a blocking minority – that is, stopping any proposal in the EU where unanimity, which is about 80 percent, is not required. A blocking minority is defined as at least five states representing 35 percent of the EU population, i.e. around 155 million people.

Of course, it’s not just about numbers. The atmosphere in the Council is also changing, because it is different in isolation and different in the awareness of strong allies. Will these countries use it? In relation to the EU, Giorgia Meloni is on the same page as the majority in the ODS: no deepening of integration, no strengthening of common institutions, no abolition of the right of veto – an extensive article on the Politico server about Meloni it had the telling title Veni, vidi, veto. MEPs of the Brothers of Italy voted against a critical resolution addressing Orbán’s plundering of the rule of law (just like the ODS), they criticize migration quotas, green policy, the expansion of women’s rights. The only significant difference between the two parties is that Italians pay in euros, and Meloni doesn’t want to change that.

The Czech Presidency and the unexpected role for Petr Fiala to be at the head of Europe against the backdrop of a brutal Russian war opened up an opportunity for the ODS to get rid of clichés (“European integration has failed”) and prejudices (“Brussels is playing against the member states”) and to find a more rational and informed center of gravity. We could find out if the “new ODS” corresponds to the Fial of 2022, who appeals for European unity and common progress, or the Fial of the previous post-Clausian years, when he claimed that “there is no such thing as a European interest; there are only the national ones”.

See also  Anpi, Parisi does not say it all: the "red" partisans fought for Stalin, not for freedom

This process has now slowed down, if not stopped. The ODS will comfortably hide behind the sixty million Italian back and nothing will force it to change. MEP Jan Zahradil was rightly happy about the Italian elections, for him it is good news. Less so for the more liberal and European voters of the ODS and for the party itself, if it wants to appeal to more people than its hard core.