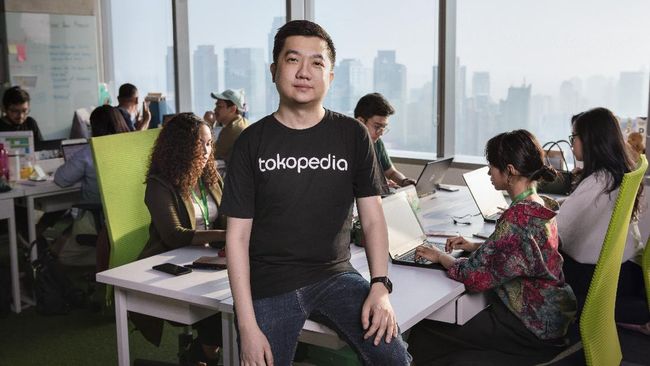 The founder and CEO of Tokopedia, William Tanuwijaya was named Businessperson of the Year 2021 by Fortune Indonesia. He became one of the 20 best Indonesian businessmen this year.

Especially if you look at William’s unusual and winding life journey. If many other startup founders come from wealthy families or drop out of world-class universities, William is the opposite.

William, who was born in Pematangsiantar, North Sumatra, has a simpler background. He also had to take his education level far from his homeland.

Since graduating from high school, William has migrated to Jakarta to get a better education. Various trials for his education came one after another and forged him for the better.

One of those trials came when in his second year studying Information Engineering at Bina Nusantara University, William’s father fell ill. William also had to work part-time as an internet cafe keeper in order to continue to study in Jakarta.

Being an internet cafe keeper made William wrestle with the world of the internet. This urgent situation made his love for the internet world grow. Until finally William sparked the idea to build Tokopedia in 2009 with his friend Leontinus Alpha Edison.

The effort to build Tokopedia is not easy. The ups and downs looking for investors went through. Only in 2010, Tokopedia got an investor, namely East Ventures as the first investor. Likewise, Tokopedia became the first entity in the East Ventures portfolio.

After that, Tokopedia continued to grow. Many other investors then came knocking on the door as Tokopedia grew, which William welcomed with open arms.

Over the years of developing Tokopedia, his hard work has paid off. Evidently, the way to continue to collaborate has a positive impact.

Most recently, in May 2021, Tokopedia officially formed a business combination with Gojek in the form of the GoTo Group, which is now the largest technology group in Indonesia.

The GoTo Group had a Gross Transaction Value (GTV) of US$22 billion in transactions during that period. Meanwhile, there are more than two million driver partners and 11 million registered merchants in the GoTo ecosystem based on data as of December 2020.