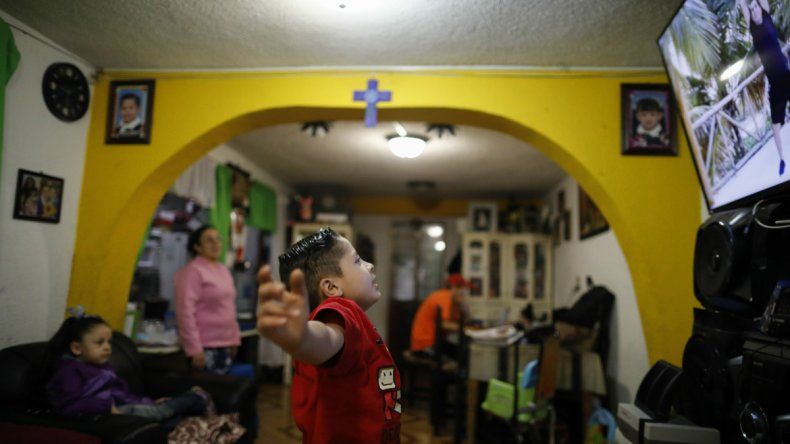 Private schools must also operate with distance classes, as had been the case since March 17, when face-to-face activities were suspended.

“Despite the pandemic, the pain, the suffering it has caused (…) we are standing,” President Andrés Manuel López Obrador said on Monday when he declared the cycle open.

Mexico, with 128.8 million inhabitants, accumulates 60,480 deaths from COVID-19 and is the third most mourning country after the United States and Brazil. It also counts 560,164 confirmed cases.

In a 50-square-meter apartment in the Iztapalapa neighborhood, Emiliano is “like a caged lion” after five months of confinement, his mother, Mónica González, a 49-year-old receptionist, told AFP.

In front of television, the 11-year-old takes his first class in the sixth year of primary school. To cheer him up, his parents put up a sign with the legend “Happy Back to School 2020-2021.”

After a first segment of the classes, Emiliano writes down the driver’s questions, although without gestures of interest.

The “Learn at Home” plan adopted television because its coverage is 94%, compared to 70% or 80% of the internet, according to the government, allied with four private television stations and which provides free books.

The classes will be taught by open signal and cable services, although teachers may also organize sessions by video call, explained the Secretary of Education, Esteban Moctezuma.

The contents will be available in 22 indigenous languages, and in remote areas will be broadcast on the radio. In addition, 160 pedagogical support telephone lines were enabled.

See also  What most people do wrong with skin care

The curriculum incorporated a health subject, as Mexico ranks first in childhood obesity.

In addition, 25% of those who died from the virus suffered from this condition and three-quarters had at least one comorbidity associated with poor diet.

Confinement and economic deterioration, meanwhile, are affecting children and adolescents.

Nicolás Cabrera, 18, woke up one morning with a panic attack believing that he had covid-19, says his father, Christian Cabrera, a 50-year-old Argentine living in Mexico.

To reassure him, Christian and his wife allowed him to have a friend visit. But the anxiety returned.

In the last month, calls to the help lines increased 30%, while the influx to the emergency services of that hospital doubled.

“10% of these cases are debutants in depressive symptoms and anxiety disorders”, explains Sarmiento.

“There are days when he has cried, he tells me ‘Mom, I’m already desperate, I want to go out, I want to see my grandparents,'” says Emiliano’s mother.

32.3% of Mexican households with children under 17 years of age report that one or more members have lost their jobs due to the crisis, according to a survey by the Universidad Iberoamericana and UNICEF Mexico.

Before starting the new cycle, Emiliano’s father was already dissatisfied with the sessions that ended the previous period.

“They were bad, it seemed that the videos were taken from YouTube, and I am concerned about how good ‘Learn at home II’ can be now on television,” says Alfredo Urdiain, 45-year-old administrator.

See also  Restaurants: will people have to get used to leaving personal information?

Learning “does not occur through informative content but rather through interaction in the educational community (…) Obviously the result will be very regrettable,” says Juan Martín Pérez, from the Network for the Rights of the Childhood in Mexico (Redim).