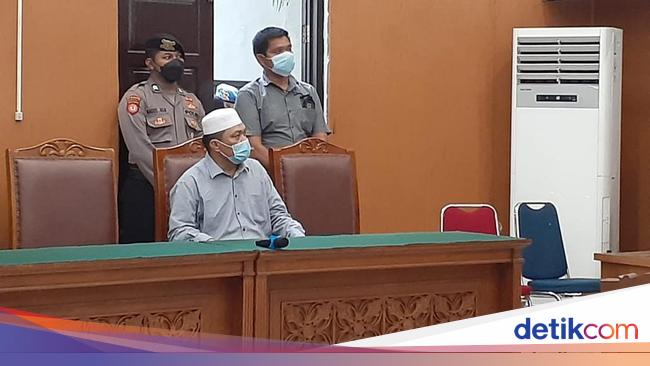 There is an interesting moment after the pretrial lawsuit Yahya Waloni, a suspect in the blasphemy case, at the South Jakarta District Court (PN Jaksel). The lecturer admitted that he had made fun of Christianity and apologized to Christians.

Initially, Yahya Waloni said the problems he experienced tended to be ethical and moral issues. Therefore, he revoked the pretrial lawsuit previously filed by his legal advisor.

“There is something I want to say that my problem is not a serious problem, my problem is a matter of ethics, politeness and morality. I think related to what we have gone through regarding the implementation law rather than the pretrial hearing, it is impossible for me to do and it has been ratified. ,” said Yahya Waloni at the South Jakarta District Court, Jalan Ampera, South Jakarta, Monday (27/9/2021).

Yahya said he grew up in a morally good environment. However, he realized that his words when delivering da’wah went beyond ethical boundaries.

“I in this case as a normal human being who lives educated in an ethical and moral environment, apologize for my mistakes and faults that do not set a good example in setting a consequence of da’wah commitment so that it has exceeded the ethical boundaries in the life of the nation. and state, “he said Yahya Waloni.

He also said that he felt regret after watching the video of his lecture which was judged to be blaspheming against Christianity. He said the content of his lectures that tarnished Christianity did not match the teachings of his religion.

See also  Migrants, health emergency: "Here they run away, there is a plan ..."

“And this is what I really regret after seeing the video, it doesn’t seem to match what I’ve been doing so far as a preacher. The Prophet taught us to always prioritize morality,” he added.

“But before that in front of the audience, in front of journalists, I apologize to the entire Indonesian community, especially to my fellow Christians,” he said. Yahya Waloni.

He hopes that there are lessons to be learned from the legal case that ensnares him at this time. He also hopes to be a preacher who can set an example.

“Hopefully in the future Allah SWT will give me better wisdom to be a preacher who is a role model. So the success of NKRI, all the sons and daughters of the nation, hopefully Allah SWT helps us all,” said Yahya.