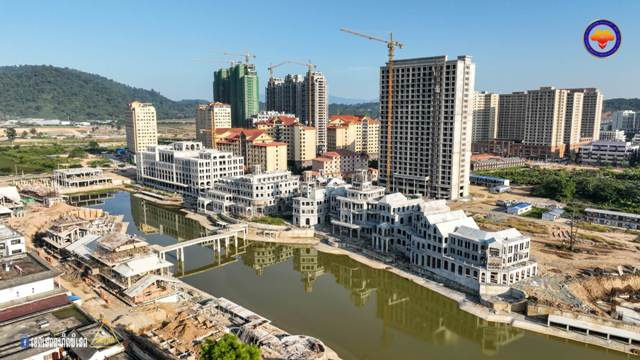 Golden Triangle – open your mind verbatim “Zhao Wei – Ruler of the Golden Triangle” against accusations involving 5 Chinese dragon tigers, gray capital in Thailand. Plus being blacklisted by America Pointing out the target as a haven for drugs, money laundering, weapons of war, crime, etc., has come too far to allow it to be a gray area.

“Golden Triangle” in the past, the prosperous “Khun Sa” era was known as a world-class drug production center. both opium and heroin were sent to Thailand and through to various countries around the world until the end of the Khun Sa era Burma’s break-up minority forces grow to replace many groups

Superpowers such as the United States often refer to this as an undesirable source, while Lao PDR has made major arrests and seizures of narcotics. in Ton Phueng and other cities in Bokeo Sub-district many times Most recently, Mr. Chuvit Kamolvisit, a former famous politician and business owner. who came out to expose the gray Chinese capital group network in Thailand, connected to “Zhao Wei”, the chairman of the board of directors of the Golden Triangle Special Economic Zone, over 70 years old

And the last.. “Zhao Wei” Golden Triangle Kingdom came out open about allegations

“I had a very difficult life as a child. And Chinese culture molds people to reciprocate people and be like this. After coming to live in Lao PDR, he has accelerated development by planting more trees. 400,000-500,000 trees since coming here at the age of 56 years until today, developing the area to be prosperous and stable So I don’t understand why I’m being accused of it.” The Golden Triangle Grandmaster said in a serious tone that followed the fearless traditional Chinese personality.

Zhao Wei continued to say in a firm tone that He is just a Chinese businessman who has the opportunity to develop a special economic zone in Lao PDR, not related to Thailand. So I wonder why there is a claim that he is related to the gray Chinese capital in Thailand. Especially linking him to the 5 Dragon Tiger group, which he thinks these things are impossible and suspects that there are many Chinese investors who invest all over the world, but why do they have to focus on themselves?

The Great of the Golden Triangle tried to ask if there would be any reference to him as it appeared in the news. Asked to bring evidence that can be proven to show as well. Because if they refer to each other without evidence like this, it is not fair to them at all.

“Zhao Wei” also mentioned the Golden Triangle Special Economic Zone where he led the Chinese opera flower group. which is a Chinese investment group that has been developed since 2007 that it is not a twilight or scary land as some people understand Because nowadays it has been developed to be prosperous, diverse and safe. People who have been here will know. Especially tourists will know that we are ready to welcome you. Upon arrival, we can experience the way of life of Chinese and Lao people. New attractions, food, etc.

As for the case of the casino known as the King’s Roman In the past, it was considered only part of the entire Special Economic Zone. And nowadays, there is an investment group from Singapore named “Sky”, 49 years old, who has already leased and managed in the name of ALLUXI CASINO.

See also  I made the sale! Casino intends to sell part of the company for around 500 million

Mr. Zhao Wei emphasized that the Golden Triangle Special Economic Zone is a development area for trade, investment, tourism, etc., which we are trying to develop into a global level. especially in tourism In this regard, the Lao PDR government and investors already know what our goals are. So we’ve come too far into the gray area and we’re not wasting our time on such untruths.

“I will prove the truth without correcting any news,” said the Great of the Golden Triangle.

Zhao Wei mentions the case of Mr. Chuwit alleging that he had never met Mr. Chuvit before. and have never even met face to face, so there is absolutely no intimacy so he wondered why he was referring to him And I wonder if there will be anyone behind it or not? Like the United States has blacklisted – linking his name to drugs too .. I don’t care because they see it as an attempt to mislead people around the world.

In the end, “Zhao Wei” spoke comfortably about the events. that happened “I went down to meet the villagers. Then the villagers took some threads and tied them around my wrists. and say nothing I can’t hear But it can be understood as wishing for good things.”

for the Golden Triangle Special Economic Zone Flower Capital Group Has received a concession from the Lao PDR government to develop for 99 years, which in the past has been developed about 2,173 hectares or 13,581 rai, with infrastructure construction, roads, electricity, commercial buildings, ports, hotels, resorts, entertainment venues, casinos Restaurants, performance centers, border markets, etc. Recently, there is also a construction project that has been completed at Bokeo International Airport. It is about 5 kilometers from the center of the Special Economic Zone, covers an area of ​​approximately 300 hectares, and costs US$ 175 million. and the floating market or heat-kong market, traditionally, using a budget of 100 million US dollars, etc.

But it is said that the Chinese opera flower group still has tens of thousands of rais of areas waiting for further development.